An Analytical Essay on the Tragedy of Oedipus in Sophocles’ “Oedipus the King” Debates on whether men control their fates or whether their fates are already dictated by another force are not new and has definitely not ended. Still, even if arguments on the subject has been exhaustingly discussed, there is still no conclusion formed of whether humanity really make their own choices or if there is a greater or heavenly force which deprives humanity of that choice. Such circumstance is depicted in Oedipus the King, one of the trilogies in a famous Greek tragedian’s plays.

Don't use plagiarized sources. Get your custom essay on
“ Olympian Destiny vs. Personal Choice ”
Get custom paper
NEW! smart matching with writer

Sophocles, who is known to be one of the pioneers of tragedies (as a drama) in the world, writes of the sad and terrible fate of Oedipus who is the ruler of Thebes after he saves the people of Thebes from a “monster”. The play revolves around a prophecy that Oedipus wants to kill his own father and make his own mother as a wife.

This leads to this essay’s purpose which is to discuss on whether Oedipus was destined to have such end or whether he was the one who actually made his own fate.

In Oedipus the King, trouble brews in Thebes as the people are in pandemonium over a sickness that spreads over the city. Oedipus who is the present ruler of the city after defeating the Sphinx asks help from an oracle to decipher why Thebes if suffering such fate. The oracle reveals that Olympus is angry over the murder of Thebes’ past King and the city can only be restored to its proper order when the King’s murderer has been caught.

This rather ominous scene sets the play in motion as the court of Thebes starts to investigate and prod on who is the possible murderer of the dead King.

Through much explanation, interrogation and prodding, it is found out that it is Oedipus himself who has killed the King, making the prophecy of Apollo true—that Oedipus will kill his father and marry his own mother. Because Thebes needs to be saved and because Creon cries out for Oedipus to respect the desires of Olympus, Oedipus willingly exiles himself from Thebes and eventually (in the next and last part of the trilogy, Oedipus at Colonus) dies alone. The trilogy that Sophocles has written is known to be the Oedipus plays even if one of the plays played out with the King already dead.

However, it is quite evident that in all the plays, Oedipus plays an important part because his fate serves as background of all the plays and his fate becomes a catalyst for all the other scenes in the plot. This fate that brings down such grief to Oedipus and his family is connected to Apollo’s prophecy that was predicted by an oracle in Delphi. Oedipus recounts this prophecy when he talks to Jocasta, his queen and wife (and unbeknownst to him, his mother) over the reason why he self-exiled himself from Corinth:

And so I went in secret off to Delphi. / I didn’t tell my mother or my father. Apollo sent me back without an answer, / so I didn’t learn what I had come to find. But when he spoke he uttered monstrous things, / strange terrors and horrific miseries— it was my fate to defile my mother’s bed, / to bring forth to men a human family that people could not bear to look upon, / to murder the father who engendered me. (Sophocles 945-954)

This excerpt points to the fact that it is Apollo who passed the knowledge of the prophecy and Oedipus is well aware of the said prophecy. Thus, it would seem that the fate of Oedipus is already determined but there is a possibility that although he made unconscious and innocent choices and decisions, Oedipus is still well aware that all the things that he will do leads to something greater and sadder. This something greater and sadder is his tragic fate that would result in the death of his own father and would result in an immoral relationship with his own mother.

This premise neither proves nor negates whether Oedipus’s life was created out of the decisions, actions and choices he made or whether his life was already created by another force for him. Both arguments may be correct but the other holds more weight based on the text itself. With regards to the tragedy of Oedipus’ fate created by his own choice, it can be shown in how the Chorus of the play described Oedipus that he was a man who had his own power from his mental strength which resulted in his ability to be very cunning:

You residents of Thebes, our native land, / look on this man, this Oedipus, the one who understood that celebrated riddle. / He was the most powerful of men. All citizens who witnessed this man’s wealth / were envious. Now what a surging tide of terrible disaster sweeps around him. (Sophocles 1805–1811) The Chorus described Oedipus as having feats that he alone did without the help of any other force or power—this would of course show that Oedipus’ total worth as a character and individual was not just created by the Olympian gods alone.

Oedipus also had a hand in the making of his own totality as a person. Thus, his characteristics which lead to his “crimes” were the culmination of all these characteristics. For example, he is cunning and that is why he was able to defeat his father in battle and he was able to solve the Sphinx’s riddle. Because of these two circumstances, he killed his father and he won the queen of the city who is his mother. Apollo merely prophesised Oedipus’ fate—the sun god did not provide the weapon which would kill Oedipus nor did he provide the answer to the riddle.

Thus, Oedipus was able to the things he has done based on his own judgement and discernment as a person. On the other hand, the premise that Oedipus is the victim of the tragedy of fate manufactured by the Olympian gods still holds more weight compared to whether he is a victim of his own misplaced judgements and actions. This can be proven by the following lines delivered by the Chorus of the play: In everything / our loftiest traditions consecrate,

those laws engendered in the heavenly skies, / whose only father is Olympus. They were not born from mortal men, / nor will they sleep and be forgotten. In them lives an ageless mighty god. (Sophocles 1034-1040) The lines explain that men’s laws and the traditions that they exalt, whether good or bad and advantageous or remiss, is created by the heavens. Therefore, men are but putty in the hands of the gods and goddesses of Olympus. Whatever human beings do, it is determined already by the hands of the gods.

If this supposition is correct, it just means that Oedipus’ entire life was created by the gods and it is up to the gods on how his life will end; even if the Queen Jocasta believes otherwise: “Fear? What should a man fear? It’s all chance, chance rules our lives. Not a man on earth can see a day ahead, groping through the dark. Better to live at random, best we can” (Sophocles 1068–1078). When the queen declared such judgement, she was not able to consider that even if chance rules humanity’s lives; chance is also something which the heavens also control.

Though men make decisions in certain circumstances, those circumstances were also created by pre-determined fate: Oedipus had to be there at the exact same time his father was at the crossroads; Oedipus had to take the path going to Thebes; Oedipus had to solve the riddle by the Sphinx, etc. Thus, although Oedipus can make his own decisions which lead to his tragic fate, his tragic fate was already determined by his hands not his own. It was determined, based on the Greek mythologies, by the Fates. Works Cited Sophocles. Oedipus Rex. Ontario: General Publishing, Ltd. , 1991. 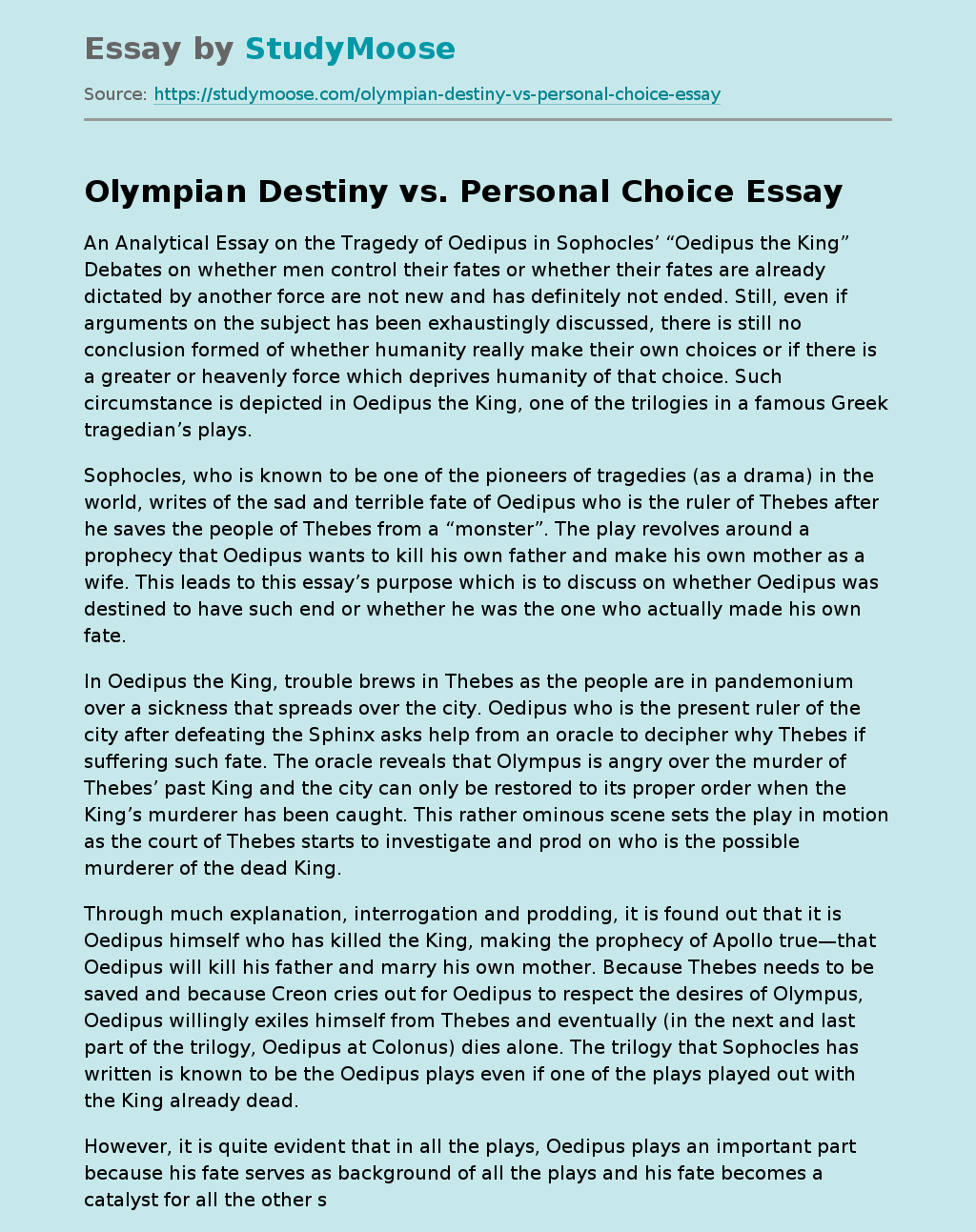