Many people go down in history for an abundant amount of reasons. During the 1920s many of these people became known to be. We know many scientists, models, actors, authors, and inventors that are from this time. One person that is remembered from this decade that was not like the others was Al Capone. Al Capone is remembered as notorious gangsters in American History.

On the day of January 17, 1899 two immigrants from Italy who newly lived in Brooklyn, New York had given birth to a baby boy.

His name was Alphonse Gabriel Capone, later known to be Al Capone. Alphonse’s parents worked as a seamstress and a barber, both of their jobs were very low paying. As a child he grew up in Brooklyn with his 8 siblings who were very bad influences. His brothers and sisters were associated in gangs which brought him into further trouble. At age fourteen he was expelled from school for punching a teacher. After dropping out from school Al Capone became associated with local street gangs.

Once he got into a fight and was known as “scarface” after being cut.

When he became older he had gotten used to his street life and moved to Chicago to work for Johnny Torrio. Capone worked his way up to eventually become his right hand man. During this time all types of producing, making, selling alcohol was against the law. Al Capone managed to do all of these and never got caught, he made lots of money doing this.

A few years later, in 1925 Torrio was killed by a rival gang and the position of crime boss as now Capone’s. As the leader, Capone focuses on making money by any means. He did this by “selling illegal liquor, offering ‘protection’ services, and running gambling houses.”

Capone was known to be a ruthless person. He had many competing gangsters personally murdered and others who thought they might betray him. By doing all of these led a risky lifestyle and avoided going to jail by bribing the police and many politicians. “During the Great Depression, it was Al Capone that opened the first soup kitchen for the homeless in Chicago.” He used what he had (money) to gain popularity with the people. Once Capone and his henchmen planned to dress up as police officers and kill several of his competing crime lords. This was on February14, 1929 and was in the newspaper the next day. When people saw the photos they realized it was Al Capone and he needed to be put in jail.

Capone spent several months in jail for previous crimes but he spent even more time in court. “A Prohibition Agent named Eliot Ness decided to go after Capone’s operations. He gathered a number of loyal and honest agents that later earned the nickname the ‘Untouchables’ because they couldn’t be bribed by Capone. Ness and his men managed to raid a number of Capone’s illegal facilities. Capone tried to have Ness assassinated several times, but failed. In the end, Ness didn’t catch Capone for his organized crime activities, but helped the IRS catch him for evading taxes.”

Capone was finally sent to prison in 1932 for tax evasion, or mostly known as not paying his taxes. He was sent to jail for a total of 8 years. In the year of 1939 he was finally released early or semigood behavior. After his time spent in the slammer he was sick metally and physically from disease. When he was 48 he passed from a heart attack On January 25, 1947 Al Capone was found dead in his home in Palm Island, Florida. 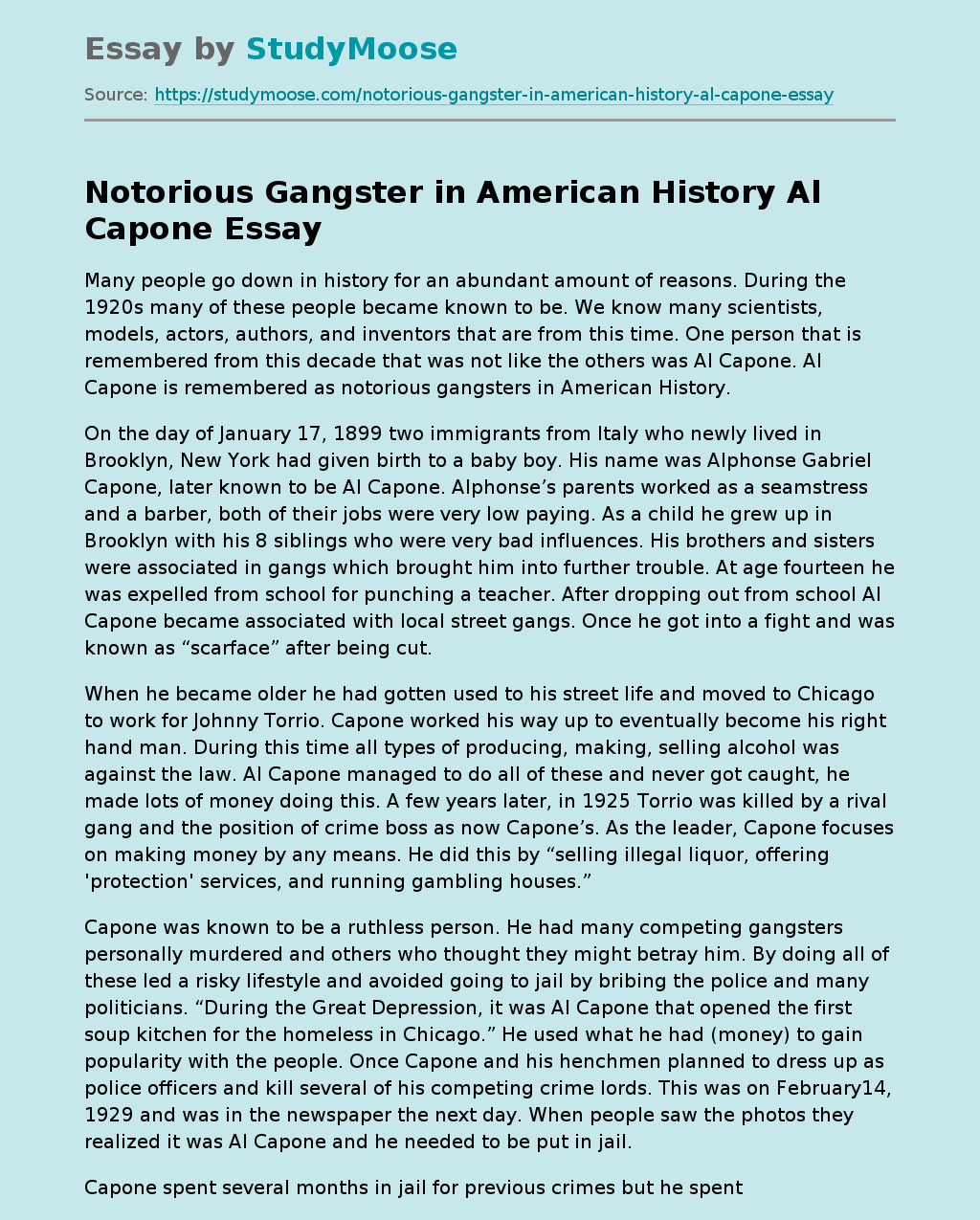