Nothing Can Change Past

Past is past, nothing can change it. Beautiful moments eventually will come to an end even for a fearless smuggler, like Bob; who lost his family from the infectious diseases; also known as cordyceps fungus that are spread all across the country, on the other hand, his daughter was killed by the Brazilian army, because they considered her a mutant compared to her kind, She is diagnosed with a disease that will make her turn to one of the nasty beings and contagious to others.

Don't use plagiarized sources. Get your custom essay on
“ Nothing Can Change Past ”
Get custom paper
NEW! smart matching with writer

However, there’s always a way for a better future.

Bob is a smart homeless smuggler who tries to survive despite the odds he’s facing. Bob and his older brother was the only survivors from their family, his brother Ted was charming and charismatic, he became a doctor after the death of his family to save people’s lives from the disease that is spread all across the country.

During 1971, where the darkness filled the sky, Bob was pondering his family picture that is worth a thousand words to him, he never stops thinking about his beautiful memories with his family, especially the moments with his beloved daughter, he was living in despair while his brother Ted was always trying to comfort him.

While Bob was riding his horse toward the general store to purchase some cigarettes, he heard a screaming sound coming beside the general store, shouting “help, somebody help me,” Bob immediately hop out of his horse and ran towards the sound, he saw a teenage girl trying to escape an infected being that attempts to transfer his infection to her to make her turn like one of them, Bob quickly grabbed his pistol from his waist and aimed it at the creature and fired a bullet right in his head, the creature is dead, but the girl is still in the ground Bob ran toward the girl to assure that nothing happened to her, but she was bitten by the creature, she will eventually die if she didn’t cure it.

Bob tried to help her.

“Hop on the horse and I’ll get you to my brother young lady, he knows how to cure this infection,” Bob demanded.

“Thank you for your help but I’m feeling well,” she responded.

“You’re dying here, you won’t make it without curing your infection,” he said

“Thank you for your kindness sir but I’ve got to go, I’m Sarah by the way.”

“I’ll feel guilty if something happened to you girl, I’m leaving here in case anything happens,” he said.

Sarah walked towards her wooden house and rearmed herself with weapons, therefore, Bob followed her and tracked every move she did to assure that she is fine, he was hiding in the woods waiting for her to leave her house, eventually she opened the door and left the house carrying weapons, Bob was surprised by the girl. He kept tracking her till they reach an old destroyed motel, she entered the motel and shouted “I’m here for revenge Mr. Bruce, you killed my father ten years ago, now I’m seeking for revenge.” Bob never lost track of her and entered the motel, Sarah didn’t noticed him, she went up stairs looking for Mr. Bruce, but she was surprised by a hostile men that tries to kill her, she quickly ran toward an obstacle to cover herself from the shots, Bob heard the shot fire coming from the second floor of the motel, he crouched and slowly walk up the stairs toward the sound, he sawed Sarah hiding from the hostile men, he called her “Sarah, Sarah,” but unfortunately she didn’t hear him because of the loud shot fire sound, Bob crawl toward the obstacle she’s hiding at.

“What are you doing here,” Sarah said.

“Follow me, we’re going to get out of this place,” he claims.

“It’s impossible they are everywhere, they’ve surrounded the whole motel, we’re going to die!” She said.

“Trust me young lady we’re getting out of here,” Bob persuades.

Bob took his gun and start shooting while finding a way out, he told Sarah to run to the fire exit door as fast as possible as he covers her back, while they were running Bob got shot at his back, Sarah turned and saw Bob in the ground, she quickly ran to help him.

“I’m not leaving you, please help me take you to the fire exit door,” she said.

“The horse is at the outside of the motel, let’s get to the horse,” He said with a stammering voice.

Bob was paddling toward the fire exit door with the help of Sarah till they reached the horse, Bob slowly hop on the horse with Sarah riding it. “What should I do now,” Sarah said. She was so nervous and scared as there are no nearby hospitals that can help them cure this wound, Bob was fading, She quickly ride him to her wooden house. She lay him on her bed, asking him for what to do.

“You have to get the bullet out of me as fast as possible,” Bob said.

“At first you have to clean the wound with hot water, then keep a knife on the fire for several minutes, after that enter the knife inside the wound with force and remove the bullet,” Bob explained.

Sarah did what Bob told her, she cleaned the wound with hot water, took the knife from fire and started, Bob was screaming in pain until the bullet is finally out. While Sarah is taking care of Bob, she heard a loud quashing sound coming from the woods, she looked through the window and saw the infected beings coming closer towards her house, she was frightened, Sarah grabbed her gun and start shooting them through her window, Bob was asleep, she was so good with shooting as her father taught her a lot of lessons on how to kill a deer using guns, bows and knives. She killed every single one of them.

Sarah started to feel the infection she got earlier, it starts to hurt her. When the sun rise Bob woke up he saw Sarah in the ground, he thought she was asleep, he started to call her name, but she wasn’t responding to him, he rolled her body toward him and saw the infection becoming more visible, he quickly carried her to his horse and heads to his brother, while he’s on his way a man stood in front of his horse which forced Bob to slow down he was infected too, Bob hopped out of his horse to help the man, all of a sudden a gunshot came from Bob’s horse “pew, pew, pew,” Sarah shot and killed the man!

“Sarah what have you done!” Bob said wrathfully.

“He was the murderer of my father, he is Mr. Bruce,” she responded with a stammering voice.

she quickly hopped out of the horse and beggan stabbing the man with her knife, Bob stopped her, she was crying and felt herself guilty for what she did, Bob comforted her.

They continued their way to Ted, when they arrived Bob founded an outcast trying to kill Ted using a gun, Bob tries to sneak and grab the gun from his hand, but got caught by the outcast, Bob and Ted both raised their hands trying to calm him down, “pew,” he fired the bullet right at Bob, Ted quickly jumped in front of Bob to save him, the bullet caught Ted in his heart, as the outcast man was going to shoot again a shot fire came from behind him to the back of his head, Sarah killed him. Bob falls on his knees, his heart was broken, his eyes were filled with tears, he begged for Ted to stay with him, but it was too late, Ted is dead. On the other hand, Sarah was struggling with the infection, as Bob tries to figure out the medicine Ted used to use to cure the infections, Bob was shaking while searching for the medicine until he found it, he then wiped the medicine on Sarah’s infected, she felt better.

Bob carried his brother with tears and buried him In the garden beside his house, he then wrote an epitaph on his tombstone, which was “You’ll be always in our hearts, hero.” After a year of fatigue and discomfort Bob and Sarah continues their life as the most dangerous and fearless smugglers across the country.

Nothing Can Change Past. (2019, Dec 12). Retrieved from https://studymoose.com/nothing-can-change-past-essay 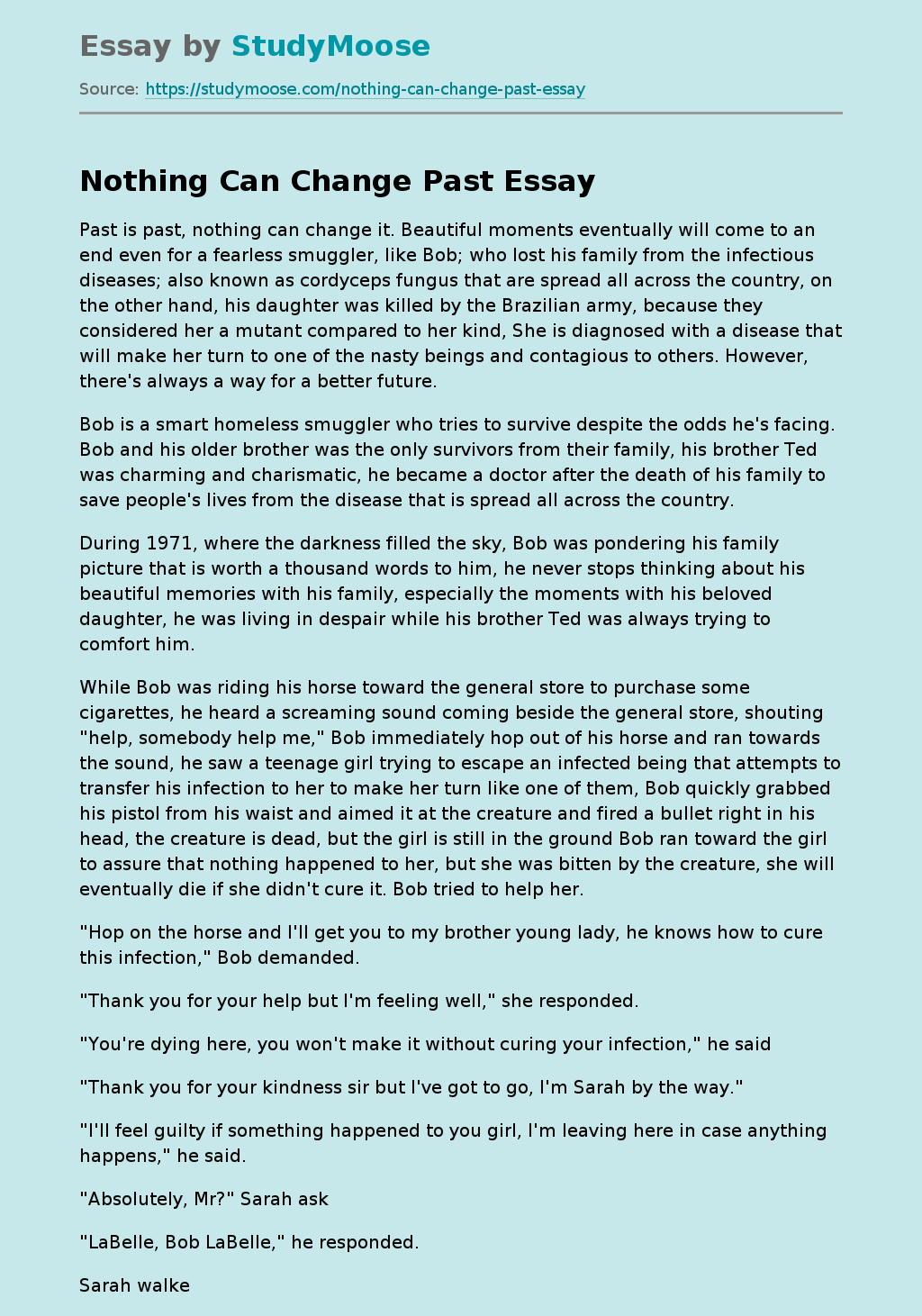