Background of the Greenhill Community Center

Greenhill was multi-service community center which was founded in 1982 in Coastal City, one of the poorest cities on the East Coast. The city had experienced several waves of immigration of refugees from Southeast Asia. Greenhill’s main purpose was to provide human service programs such as day care, elder programs, music classes and afterschool programs. The Center has a budget of nearly $700,000 with revenues coming from tuition, grants, fundraising and rental income.

Problems:During the time of management by Leslie, there were several issues and crisis coming up as following:The executive director:Leslie was learned her management skills from college, in actual, things happen differently from book; her previous job was focused on administration, not on business management, working as a executive direct in a non-profit organization is a totally different thing than her last job, during the time she’s facing to the problems of lack of experience, and having different management style from prior CEO.

Planning processLeslie suggested the Center with a wide and long-range planning process, it would better arrange the operation structure for the organization, but the trustees were only agreed to spend one hour more to one regular board meeting to do planning, and they refused to a day-long retreat.

Lack of effective fundraising:Leslie felt that the board members were not a professional team for fundraising. The trustees preferred to do special events but hide them behind. The current fundraising sources were only 20% depended on fundraising, it is not health for a non-profit organization, and the un-participation of the trustees left the executive director a heavy work load to do the fundraising alone. Fundraising had not met the target. It is the major problem, in case of the center cannot be survived with short on money.

Lack of racial diversity:Facing to the effect that the Center was reaching out the Asian community, Greenhill needed more capable staff who speaks more language to deal with different clients, but only one staff member supported Leslie’s idea for diversity.

Sexual abuse allegation:One of the day care workers sexually abused a three-year-old girl. Denise (daycare) dominated the session and the workers did not have a chance to openly discuss the issues. After this special event, the ethical training for staff was not successful, staff got defensive; Leslie still did not know what was happened.

All the program directors did not have any management experiences, some of them were only having working experiences in schools, did not work for a business management level before, this will cause a lot of issues, they might not be able to handle the conflicts (with staff) well, or not able to communicate with others effectively.

Faculty has space problem for program:The Center was trying to provide new program in late 1990, it required additional space. But the implementation did not work out because the directors did want to share their room.

Communication throughout:Leslie to staff: different management style, Staff felt to be not involved to the projects and other activities.

Leslie to board: although, the organization had done a management assessment by The United Way, but some of the trustees were seeing it as a criticism, even finally it had been followed for months; Leslie still felt that the board was forced to do so, not considering improvement for the Center.

Board to staff: Trustees refused to communicate with the staff, and making decision neatly.

Advises and Suggestions:After analyzing the problems above, I felt that the Center’s problem were mainly focused on the following areas, these suggestions and solutions are supported by the text book with professional strategic theory.

Planning Process: (chapter 8)The goal of the Greenhill is providing services included day care, elder programs, music classes and afterschool programs to the community, the executive director and the board should be focused on this mission and able to make maintenance and improvement. Put this in actual, every week, the board should arrange a sufficient time to discuss with Leslie on the current situation of the organization, the improvement for better service for the clients and making milestones or schedules to these plans.

The Greenhill needs to do an environment analysis immediately:External: the trend of Asian community become more and more important to the community, it is an opportunity to the Center. To benefit with this effect, Greenhill needs to hire more staff or volunteers whose capable with multi languages, not only to translate the document and communicate with client, these staff can better understand the client’s culture, showing respect from the organization and help with others to deal with problems.

Internal: Greenhill’s strengths are their directors, even they do not have much experiences on management, but based on their previous working position, these teachers have great ability on teaching the programs which are provided by the Center. This reputation will attract more clients join or introduce others into the programs.

The best suggestion is involving the staff, executive director and the board get together and discuss the planning process for the Center, so each of them will understand and do his/her part to fit the requirement for Greenhill’s operation.

Communication:Lack of communication became a big issue to the executive direct, the staff and the board. Most of the problems were caused by this. To deal with it, the most solutions might be set a brief meeting every day before or after work, during the time, staff and directors will discuss and review the short term goal, it also helps employees better understand each other.

Involve staff into teambuilding programs and compensation plans to encourage relationship between the management level and employee level.

If we solve the current communication crisis, Leslie will be able to spend more time focusing on other issues, such as diversity, fundraising or ethical training. And it will also eliminate the staff conflicts, such as space problems: the directors will be noticed early with full details about what the new program will be and how it will benefit the Center, after better discuss with this, everyone could common and share their ideas, so the issue will be solved peaceful.

Fundraising Plans: (Chapter 17)The current fundraising was only 20 percent of the total funds, it become a serious financial issue to Greenhill, Leslie and the board need to make a budget for the amount of funds they are going to need for the Center, then choose a suitable ways for fundraising plans, it should be focused on what types of the donors are, which types of promotion plan will be (e.g. TV, Paper or Radio, even leaflet to current members), the board member should step forward and participate into the programs, use their reputation to influence donation. Or contact with potential partners for suggestions to see what we can learn from them.

Inviting guest speakers or lecturers to the Center for the employees, this will be more focused on the issues about ethical, so the staff will be working professional, and the director will know how to deal with this type of issues, prevent the sexual abuse be happened again. And about the diversity training, it is important that Greenhill serve the community with multi culture and religions, the staff are required to serve with people with different background, also the Center needs to recruit more volunteers or paid staff who speak more language rather than English, it will not only increase the number of clients, but also benefit with reputation and able to maximize its influence to the community.

Conclusion:After study with this case, we found the problems for the Greenhill were mainly focused on planning process, communication, fundraising, and staff training & recruitment, with our advises and suggestions, we hope these will help with the management level to deal with such issues and making improvement for further development and services for the community in Coastal City. 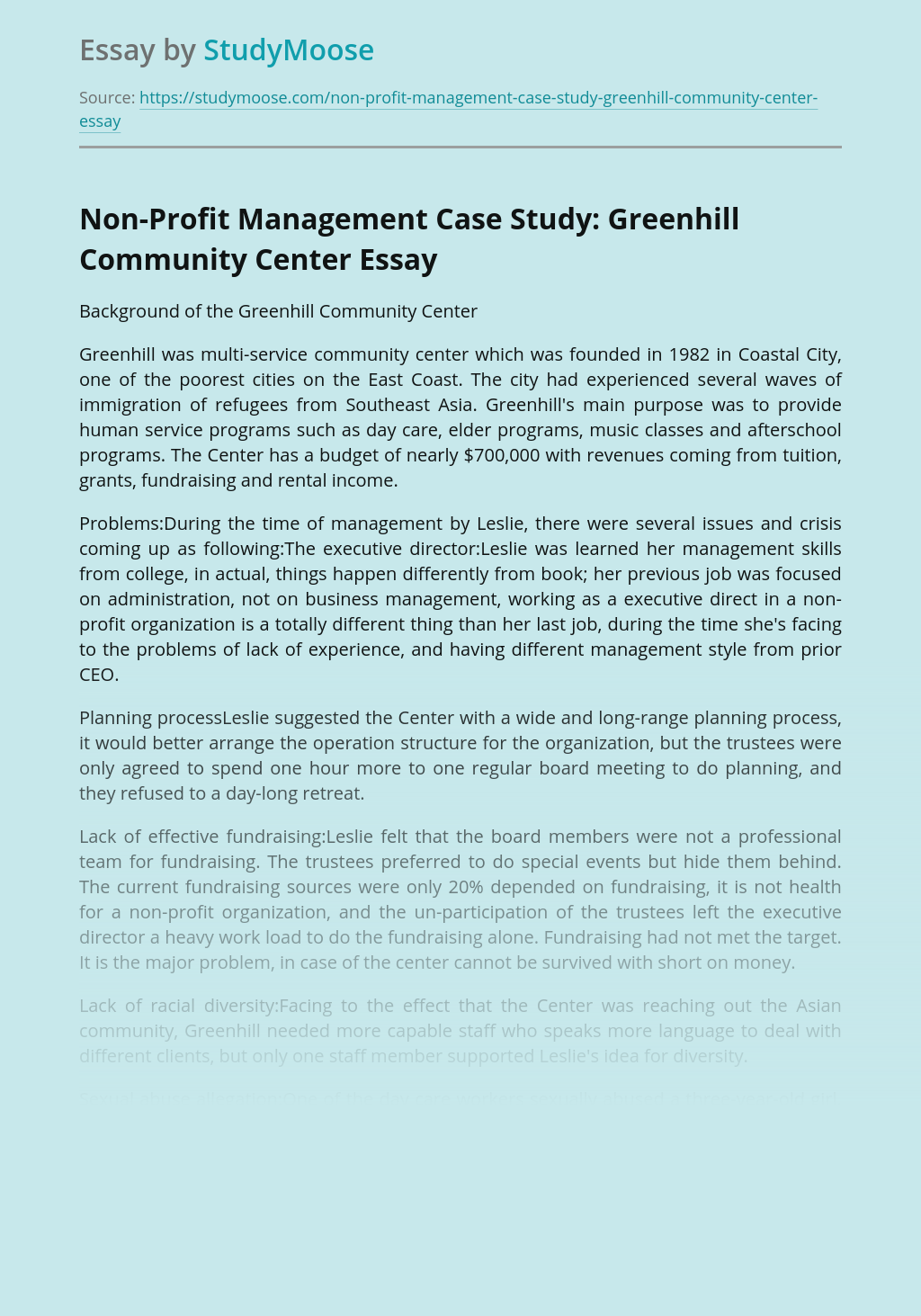 Managing resources of a business can be hard for the business they have to maintain the resources by doing various checks over the years. For example maintaining a physical resource like a building, can be challenging, but in order to maintain it, a business has to insurance the building and the contents need to be... VIEW ESSAY

Carnival Corporation as the largest cruise line in the world is being a leader and innovator in the cruise line industry. Many of the onboard activities and services were introduced to strengthen the competencies between competitors. The challenges of the Carnival were being overcome by the management with creative and innovative strategies. As a corporate... VIEW ESSAY

Background of the Greenhill Community Center Greenhill was multi-service community center which was founded in 1982 in Coastal City, one of the poorest cities on the East Coast. The city had experienced several waves of immigration of refugees from Southeast Asia. Greenhill’s main purpose was to provide human service programs such as day care, elder... VIEW ESSAY

CHAPTER 19 CORPORATIONS 1. – THE NATURE AND CLASSIFICATION OF CORPORATIONS A corporation is a legal entity created and recognized by state law. It can consist of one or two persons identified under a common name. CORPORATE PERSONNEL When an individual purchases a share of stock in a corporation, that person becomes a shareholder and... VIEW ESSAY