Children enjoy playing strategic violent video games because it challenges them and allows them to use their imagination to pretend they are someone else. My cousins enjoy playing and watching other people play violent video games. While watching them play, I have noticed that some of these video games always begin with providing players basic guns and ammo and as the player advances in the game, they are able to earn better guns and ammo. Other video games allow them to wrestle, kick and punch each other until they have lost all of their strength.

Don't use plagiarized sources. Get your custom essay on
“ Negative Effects of Video Games ”
Get custom paper
NEW! smart matching with writer

Most players enjoy the competitiveness required to level up.

They become more aggressive as a player because they want better guns and ammo or more skilled moves to increase their chances of defeating their opponent. This aggressiveness becomes a learned behavior. It seemed as if wrestling, kicking and punching each in the video games wasn’t enough. Eventually, my cousins began wrestling, hitting and kicking each other when they weren’t playing video games.

Video games can have a negative effect on children by influencing behavior, encouraging negative thoughts, and causing injuries.

Violence in video games encourage kids to behave the way they do. Studies showed that a child’s behavior can be influenced by repeatedly playing violent video games. In other words, a child becomes more aggressive after playing violent video games. ProCon.org is a nonprofit nonpartisan public charity that provides professionally-researched pros and cons on more controversial issues. According to an article on this website titled “Do Violent Video Games Contribute to Youth Violence?, ” “60% of middle school boys and 40% of middle school girls who played at least one Mature-rated (M-rated) game hit or beat up someone, compared with 39% of boys and 14% of girls who did not play M-rated games”.

Because the content seems so real, a child’s mind may not be strong enough to realize that the content in a video is not real. Katherine Lee, a former editor and writer at Parent and Working Mother Magazines, refers to the results of a study conducted by Douglas Gentile, PhD, an associate professor of psychology at Iowa State University. These results support that “children who repeatedly play violent video games learn to think in aggressive ways that can eventually influence their behavior” (Lee). When children are exposed to this content, they think it is ok to hit another student because the said something they do not like, or because they mistakenly bumped into them. Violent video games have become a way for children to practice bad behavior.

Exposure to violent content in video games provides children a way to practice bad behavior. “Practicing aggression in violent video games, teaches real-life aggressiveness” (Lee). According to a study conducted by Dr. Gentile, “repeated exposure to violent or inappropriate content can provide a setting for ‘practicing’ violent behavior until a child learns how to do it well“ (Lee). Playing violent video games is like playing sports. Unfortunately, a child acquires learned behaviors the more they play violent video games. The more they play the more skilled you become. Today, children are spending more and more time playing violent video games. As they play these violent video games, they are being rewarded for the number of kills or fighting its opponent until they have lost their strength. Eventually, their minds are molded to thinking this in normal behavior. Kid use video games as a way to release anger. They can fight and hurt characters in a video game without consequences. It seems as if the children described above lack empathy and kindness.

Children who play violent video games are less empathetic and lack kindness. According to The American Academy of Child and Adolescent Psychiatry (AACAP), an organization that represents over 8,700 child and adolescent psychiatrists, “studies of children exposed to violent media have shown that they may become numb to violence, imitate the violence, and show more aggressive behavior”. Young children as well as individuals with emotional, behavioral or learning problems may be more influenced by violent images (“Video Games and Children: Playing with Violence”). Once children have been exposed to violent behavior, it is hard for them to feel sorry for someone who accidentally hurt themselves. Instead, they do not care about what happened to that person. Harris and Klebold, the individuals responsible for the Columbine High School shooting, “enjoyed playing the bloody, shoot-’em-up video game Doom, a game licensed by the U.S. military to train soldiers to effectively kill” (Korach). These young men created a videotape that was very similar to the video game Doom. They lacked empathy for how the victims of the shooting feel and they lacked kindness because a kind person would have engaged in such an act. This is proof that playing violent video games increase aggressive thoughts, angry feelings, along with aggressive behaviors.

On the other hand, playing any type of video games can have positive effects on children. Playing video games can improve cognitive skills, hand and eye coordination, and decision making skills. “Cognitive scientists from the University of Rochester have discovered that playing action video games trains people to make the right decisions faster” (“Video Games Leads to Faster Decisions that are No Less Accurate”). Children become more aware of their surroundings, pay attention to detail, and they are able to do more than one thing at a time. When playing video games, children have to think and react quicker. They also have to pay attention as they maneuver through the video game to react properly to what they see on the screen. They have to make decisions quickly to prevent the game from ending. Also, when children are allowed to play violent video games, this becomes their outlet and prevents them from becoming aggressive with others. They release all of their anger in the video game. “A study conducted in 2014, at Stetson University in Florida, shows that the playing of death-bloated video-games actually caused real-life violence to decrease” (Kaplan). The word violent or violence automatically makes a person think that anything associated to the two words is bad. Sometimes good things can be associated to a bad word. 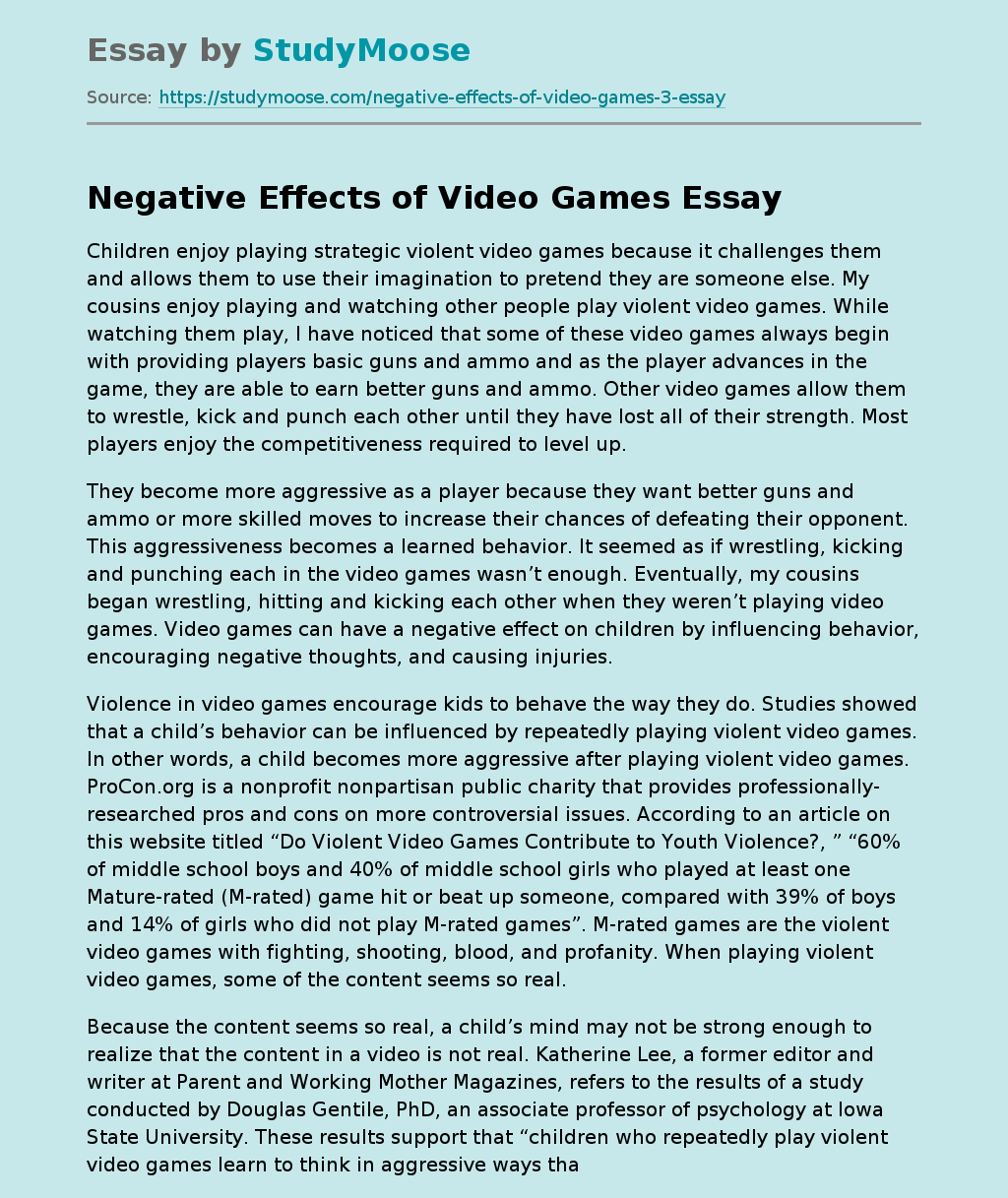