Globalization is not a new phenomena. It was primarily formed long time ago, when Greeks, Romans conquered other countries and spread their power to them. However, the nature of globalization has been changed over time and reached to the stage of modern globalization. In the article “Spiritual perspective on globalization”, Ira Rifkin (2003) says that the modern globalization could be identified from a meeting on 1944 in Bretton Woods where forty five nations agreed to establish the IMF and the World Bank. The renovation of information technology, especially the spread of Internet has pushed the globalization process to happen faster than ever before and changed the whole world dramatically.

Turn in your highest-quality paper
Get a qualified writer to help you with
“ Negative Effects of Globalization ”
Get high-quality paper
NEW! AI matching with writer

Many countries are taking advantage of globalization to stimulate their economic growth, create more jobs and improve social benefits. However, they are also suffering several negative effects of globalization: the disappearance of some traditional culture, the destruction of environment, and the disparities between rich and poor.

The first negative effect of globalization is that it is reducing the diversity of traditional culture of some small nations.

Each country has its own identical culture. However, with the development of advance technology as well as international trade, a lot of multinational corporations are established; result in an interconnected world and the removal of national borders. Some countries are unable to resist the cultural interaction with other countries as well as the cultural imperialism of developed countries. Their traditional culture is losing and replaced by Americans and Western styles. Rifkin writes that the Americans and Western culture have affected or even obliterated the traditional culture of some countries.

People in these countries are more and more prefer McDonald’s fast food, Hollywood films or Disney entertainments. In “The deadly noodle”, Hasting, Thiel and Thomas also mention that the American processed food may be one kind of American cultural sovereign. It has changed the food habits of many countries.

In addition, in some extend, globalization also impacts on the way people consider knowledge. In this Information Age, it is easy to get all necessary information on the Internet and they are often formal modern knowledge. Thus, traditional knowledge is disappearing. In “Exiled to Cyberia”, Kunda Dixit says that we have paid too much attention on formal modern knowledge, and overlooked the traditional knowledge. These cultural changes also happen in Vietnam. Young people now like to listen to the songs of the world famous singers like Celine Dion, Micheal Jackson or Lady Gaga and keep away most of Vietnamese traditional music. A lot of traditional games are no longer their favorite things. They like to spend their free time playing games online or chatting with friends on the Internet. At cinemas, Hollywood films are advertised everywhere but it is difficult to find a Vietnam film. Gradually, many countries are losing their cultural diversity and identity. And there will be no big differences between countries’ culture because of the powerful spread of America and Western culture.

Perhaps the next generations will not be aware that they used to have an unique traditional culture in their society. Another problem which countries are facing with under the effects of globalization is the degradation of environment. Human can be considered the owner of natural environment and have power to change it. However, the impacts of human on environment are more and more aggressive because of the explosion of population and economic growth. Global environment has been destroying in many different ways. In “Poverty and Environmental Degradation”, Mabogunje writes that the world’s population has increased rapidly, especially in developing countries and urban areas due to medical achievements. This population explosion has put many people in the poor standards of living. As a result, to make a living, they have cut trees in forests and over cultivated their farmlands.

Therefore, a lot of species have no place to survive and then be extinct, a wide range of lands become desertification, and losses of topsoil are happening in many countries. The global ecosystem is becoming imbalanced and the environment is seriously degraded. Also, globalization has brought serious pollution for many countries in the world. Air pollution, water pollution and climate changes are now a big issue which requires all countries to cooperate to resolve. There are several factors causing pollution. One cause of air pollution and global warming is the increase in numbers of vehicles in cities, especially in developing countries. In “If poor get richer, does world see progress”, Knickerbocker tells us that Chinese economy has been quickly developing. In Shanghai, numbers of cars have been increasing significantly every week while the bicycles may be not permitted on some big roads.

This change is making global atmosphere polluted. The situation of Vietnam is as same as other developing countries. Recently, numbers of vehicles have been growing faster in big cities and they are a main cause of air pollution in Vietnamese urban areas. The consumption of the poor people also results in pollution. According to Maboguje, the biomass fuels and other products consumed by the poor are causing serious air pollution. The broad uses of chemicals, fertilizers and pesticides are another cause of pollution. Maboguje says that in order to produce more agricultural products, farmers in many countries have broadly used fertilizers and pesticides which pollute water sources and are harmful to environment as well as people’s health.

Lastly, globalization is widening the gap between the rich and the poor. It has affected all the participants who involved in globalization process in many ways. Although some countries have already got out of poverty and developed their economy, wealth countries are those who have taken most benefits from globalization and become richer and more powerful. Multinational corporations in developed countries make huge profits from outsourcing their productions to developing countries where labor costs are very cheap and other production conditions are more favorable. As results, the gap between rich countries and poor countries are increasing. According to Rifkin, the unequal difference between the rich and the poor are widening. More than one billion people in the world are ling in very poor conditions.

The rapidly economic growth in developing countries also results in the inequality in income and living standards of people living in cities and those living in rural areas. In fact, the economic growth often happens first in industrial areas and in cities, so people who have good education or working skills can get higher income and improve their lives. In rural areas, on the other hand, people’s lives basically depend on agriculture which is slowly developed so their incomes do not change very much or even decrease because of the impact of environment changes on their agricultural production. Moreover, when economy is growing, the goods price and standards of living are also higher. These things affect seriously to the poor people and make their lives become harder.

In conclusion, globalization is unavoidable trend in this advanced technology era. Most countries in the world were involved in this spiral of globalization. Although globalization has created a lot of significant benefits to these countries, helped them increase the economic growth, improve people’s living standards, it also has brought many challenges and disadvantages for these countries, in which the dismissal of traditional culture, environmental degradation, and disparities between rich and poor are notable issues. Each country suffers the negative effects of globalization on different levels. Thus, many countries may have different solutions to their problems. However, in order to reach to the sustainable development, every country needs to coordinate together to solve the issues and minimize the disadvantage effects. 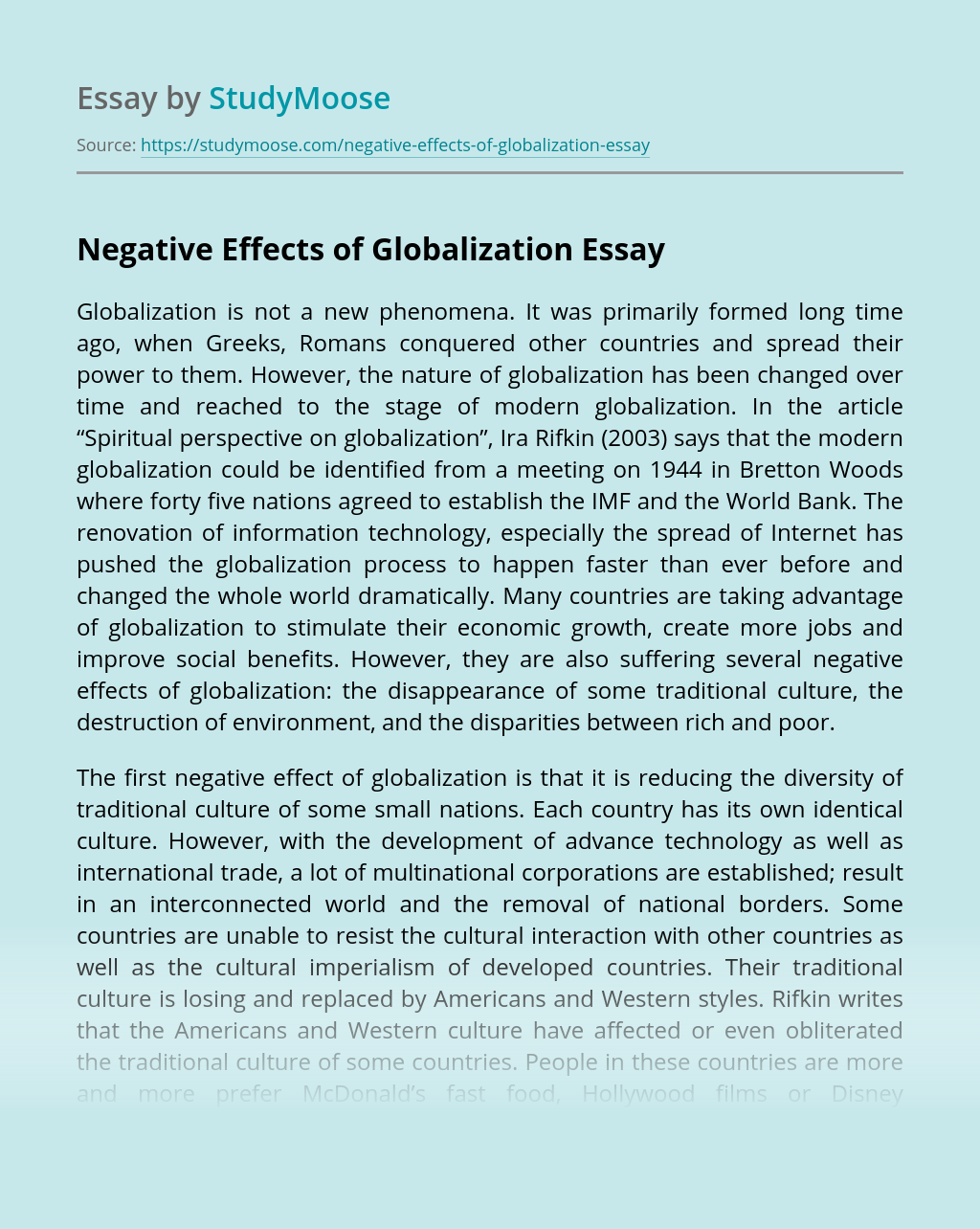 Turn in your highest-quality paper
Get a qualified writer to help you with
“ Negative Effects of Globalization ”
Get high-quality paper
Helping students since 2015
Stay Safe, Stay Original