2012 HSC Question –“ How successful was Nazi foreign policy in achieving its aims to September 1939?” Following the Nazi rise to power, Adolf Hitler’s regime conducted, and to a certain degree implemented a foreign policy that aimed for the incorporation of all Germanic speaking peoples into the Reich (Volksgemeinschaft); German domination of Western Europe; and the attainment of vast areas of living space (lebensraum) for the greater good of the volk.

While the Nazis experienced great success in their plight for German hegemony in Europe, they ultimately fell short in achieving these aims as is abundantly clear in the collapse of the Third Reich in 1945.

Don't use plagiarized sources. Get your custom essay on
“ Nazi Foreign Policy ”
Get custom paper
NEW! smart matching with writer

Nazi foreign policy was inherently nationalistic and expansionistic, and as Hitler calculated, German hegemony in Europe would require war, especially in Eastern Europe. In the words of Carl von Clausewitz “war is simply the continuation of policy by other means”; this would prove the case for Hitler as the final step of his foreign policy up until 1939 involved the invasion and occupation of Poland.

Moving and preparing the ‘Wehrmacht’ into action was a process of several years and was inextricably linked to other elements of foreign policy. Nazi withdrawal from the “League of Nations” and “Geneva Disarmament Conference” in 1933 made it abundantly clear that multilateralism played no role in Nazi foreign policy. Rearmament peaked in the years of 1933-1936, with the Nazi war timetable being actualised in the reoccupation of the Rhineland in 1936. Nazi foreign policy to this degree, suffered no real hiccups thanks not to the proficiency and aggression of Hitler, but to the inaction of Allied powers in their appeasement policies towards Germany.

The remilitarisation of the Rhineland and the passive reaction from the international community could be seen as a success for Nazi foreign policy as it not only put Germany into a greater position of power, but also proved the flexibility of the West towards Germany, enabling several other areas of foreign policy. With Hitler being an Austrian born Fuhrer of Germany, the union of German speaking sovereign states remained a high priority. A common language and common sovereignty has always been one of the greatest nationalistic tools for any country, thus Volksgemeinschaft was of great importance.

The Anschluss of 1938 was a clear success for Nazi Germany; it was carried out in a non-violent manner and Nazi propaganda succeeded in portraying the “Anschluss” as a union between the two nation states free of political and military duress and aggression. “Grossdeutschland” was the concept of greater Germany in which Hitler believed and wanted to bring all the German-speaking peoples back into the Reich; Hitler described the “Anschluss” as Austria’s return to its original home (Heimkehr).

This union would prove successful right through to the commencement of the war. The realisation of the union of Greater Germany and the concept of Volksgemeinschaft coincided with Hitler’s firm belief that Greater Germany now needed greater living space. War was a matter of necessity as it pertained to achieving Lebensraum; however as made evident in the Anglo-German naval treaty of 1935, Hitler’s Lebensraum was more concerned with the east; with this foreign policy, Hitler hoped that the Western powers would continue their policy of appeasement so with the British declaration of war in 1939 one could ascertain that the Nazis were relatively unsuccessful.

Britain was seen to be Germany’s natural ally in the west, and thus foreign policy was based upon the belief that Britain would maintain neutrality while Hitler focused on the domination of France. The Hossbach Memorandum of 1937 was a key indicator of the recent Nazi successes in foreign policy as Hitler now felt encouraged to pursue a new, more aggressive phase of foreign policy.

The Munich Conference was a stepping stone from the Hossbach Memorandum and was the last sign of appeasement from the Allies, and perhaps where the success of Nazi foreign policy would ultimately end. The Munich Conference handed over regions of Czechoslovakia to Hitler; despite Hitler saying that the Sudetenland was his last “territorial demand” he would inevitably refuse to allow Czechoslovakia remain a full state. Right up until September 1, 1939 it can be argued that Nazi foreign policy was completely successful, suffering very few setbacks.

The swift British declaration of war that resulted from the German invasion of Poland was not foreseen by Hitler and was perhaps his greatest failure up until 1939. Considering the point in time, at 1939, Nazi foreign policies were unimpeded and ultimately successful as the two major concepts of space and race were being executed at a considerable pace. Hitler and the Nazi party were able to actualise the majority of their foreign policies with minimal cost and conflict, the invasion of Poland notwithstanding. 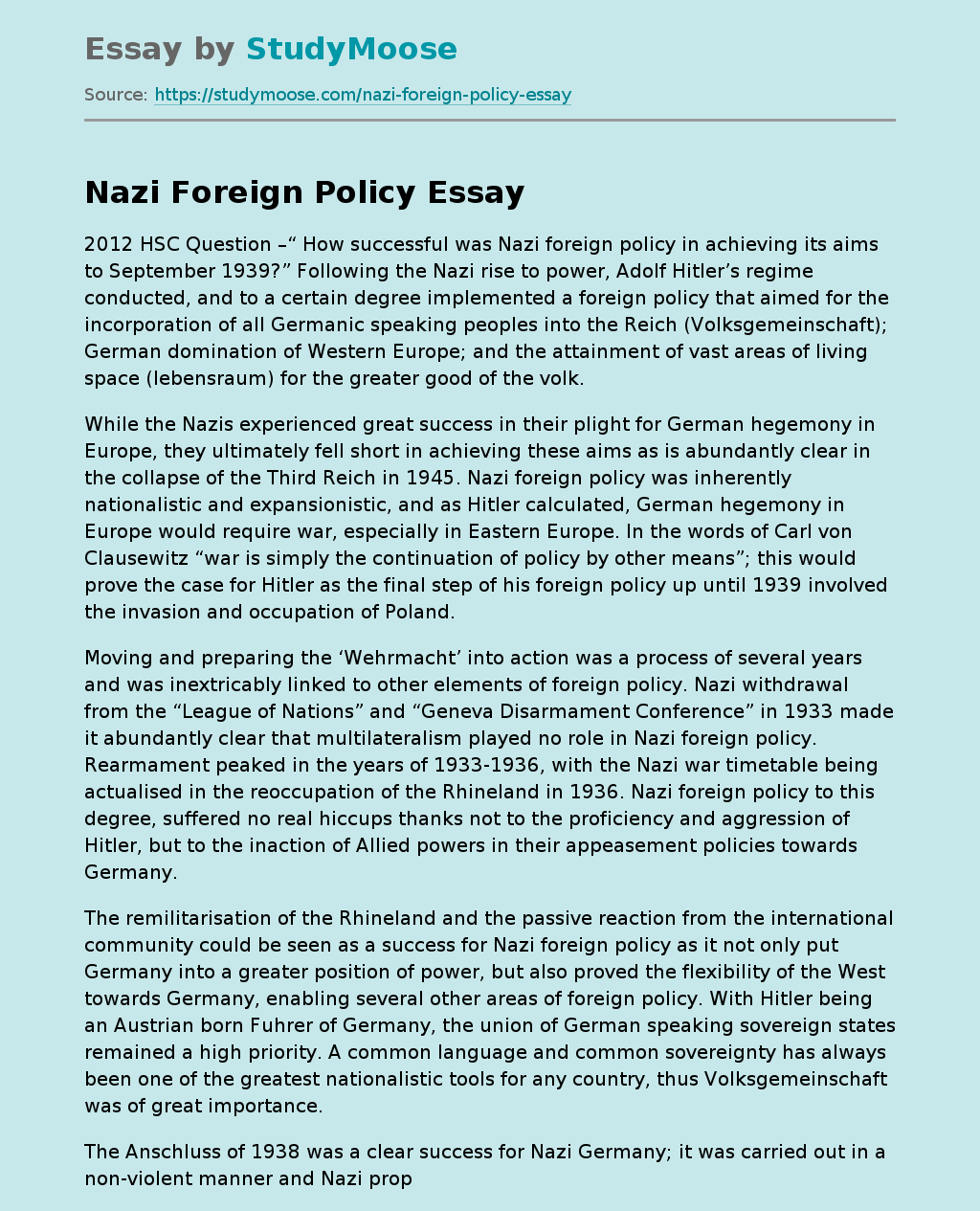