In the summer of 1775, the legendary seafarer James Cook was returning to the British Isles from his second voyage. The mysterious Omai, a native from Ulietéa island, was coming to the old world on one of the captain’s ships. Omai’s body was decorated with drawings; he was a great master of such drawings. Captain Cook called these drawings “tattoos” which means “wound” or “sign” in Tahiti. Europeans knew about tattoos before James Cook’s voyages. But Omai was nicknamed the Great and he got enormously popular in the English high society— people lined up for an opportunity to be given an indigenous mark on their bodies.

Don't use plagiarized sources. Get your custom essay on
“ Naval Traditions Tattoos ”
Get custom paper
NEW! smart matching with writer

And sailors were the first in line… Famously, sailors are quite superstitious people, this is why seafarers from many countries have invented a lot of tattoo charms in the last two centuries. The most symbolic tattoo for sailors has always been the North Star— the primary waymark for sailors from ancient times.

Sea folk believed that the tattooed North Star would grant them protection and safe passage. Another naval symbol that you could often see on a sailor’s body is the anchor, symbolizing a safe haven.

A swallow often accompanied the anchor: more than 500 miles grant a sailor the first swallow; when a sailor reaches 1,000 miles, he adds a second bird. A swallow became a symbol of hope, faith, and salvation in naval tradition. At five thousand miles, a seafarer deserved to tattoo an image of… a sparrow, a highly important bird for sailors.

If a sailor had a pig tattoo on their left knee and a rooster on their right knee, they would never lose their warrior spirit. Why? Pigs and roosters are the most frequent survivors of a shipwreck. As for the soles of the feet, it was essential for a sailor to tattoo crosses: sailors believed the crosses would definitely scare away sharks. You can always tell a seasoned old dog from a fresh sailor boy: if there’s a dragon on their back, it means the sailor has been to China. If there’s a turtle or Neptune on their arms— the sailor has crossed the Equator. During World War II, sailors of the allied navy crossing the Mediterranean Sea tattooed palm trees, and the Americans based on the Hawaiian Islands tattooed a famous picture of a Hula dancing girl.

Now we need to recall the superstitions again. For example, a sailor who rounded Cape Horn got a sailing ship on their chest. But the mast count should be odd— an even number would bring bad luck to the owner. Tattoos also served as insignias to distinguish sailors among themselves: crossed guns or muzzles denoted navy service, a harpoon—service in the fishing fleet, and a rope around a wrist denoted a deckhand. Today, anyone who wants to can decorate themselves with the naval symbols, and navy sailors usually have a single exclusive tattoo, representative of where they served. Finishing on superstitions: the famous captain James Cook looked down on the new trend of decorating a body with magical patterns, and made disdainful remarks about their protective properties. His third voyage didn’t go so well— the famous seafarer unwittingly found his final resting place on the Hawaiian shores with the assistance of tattooed natives. So to believe or not to believe, to tattoo or not to tattoo— it’s for each sailor to decide… . 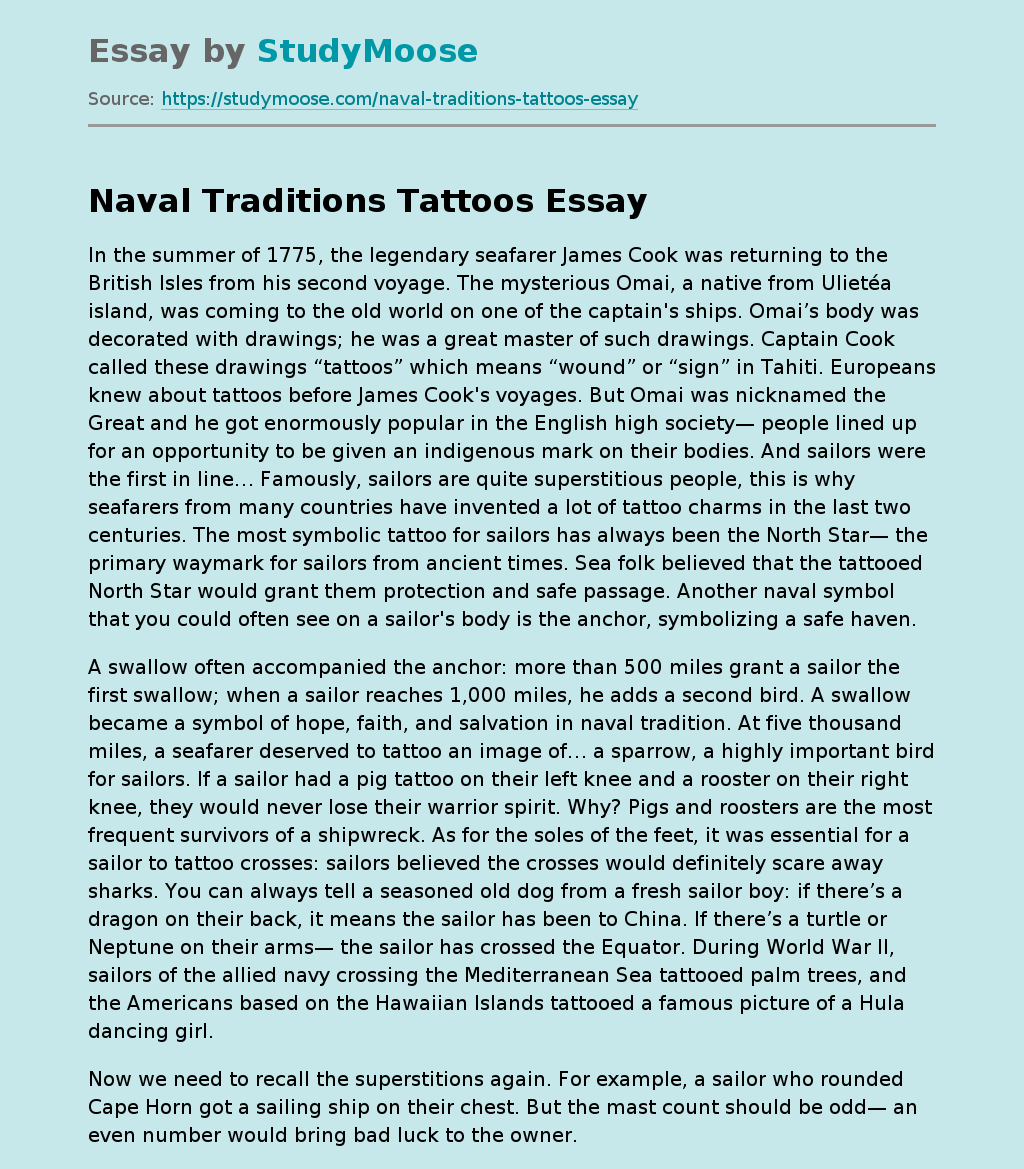