"My Financial Career" by Stephen Leacock

Write an short essay on the story “My Financial Career”. State whether you think the narrator will succeed or not in his financial plan. Give proofs.

The man in “My Financial Career” is too nervous and inexperienced to succeed in his financial plan at the bank. The people in the bank particularly the manager and the accountant do not help him because the man said everything about the bank rattled him in the first sentence of the story. He is not confident when trying something new.

Turn in your highest-quality paper
Get a qualified writer to help you with
“ “My Financial Career” by Stephen Leacock ”
Get high-quality paper
NEW! AI matching with writer

He acted vaguely when he decides to open a bank account. He emphasized a few times on requesting to see the manager “alone” in which he should not be doing this because it makes him very suspicious.

The manager fetched an accountant to help him open the account. After depositing his fifty-six dollars, he wanted to draw six dollars with a cheque. However he was too nervous that he made a mistake to draw all of his money out he had deposited.

The accountant gave him a chance to correct it as he says “What! Are you drawing it all out again?” However because of his pride, he pretended to do it on purpose.

Not only the man himself is responsible for this failure, the people in the bank are also factors that made him fail. Firstly, the clerks in the bank are not enthusiastic enough. They are not willing to help him initiatively. Secondly, the accountant is lacking zeal and acting coolly to him in which was making him even more nervous.

Lastly, the manager of the bank was impatient and spoke to the man abruptly after realizing that the man was not a rich person, it made him feel very embarrassed.

In conclusion the man failed because the lack of care from the people in the bank and his shyness, pride. He would not have failed if he was more insistent on getting his job done ignoring his pride or if the people in the bank helped him warmly. This is a humorous story but the writer wrote the story based on real situations. He tells us that people in big banks only cares about money, normal people with little money are not very important to them. The writer thinks both rich and poor people should be treated equally by banks and other companies.

"My Financial Career" by Stephen Leacock. (2016, Jul 20). Retrieved from https://studymoose.com/my-financial-career-by-stephen-leacock-essay 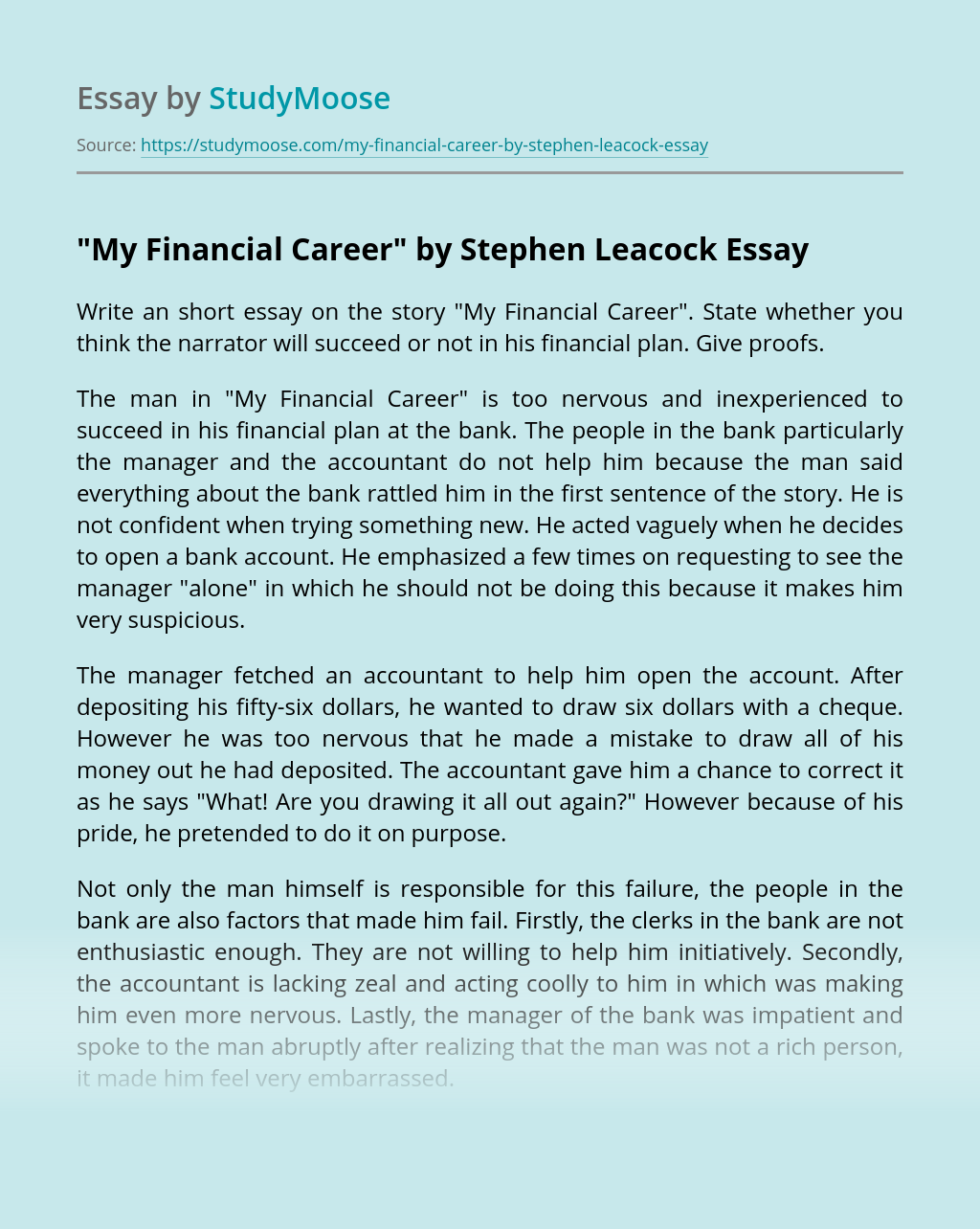 Turn in your highest-quality paper
Get a qualified writer to help you with
“ “My Financial Career” by Stephen Leacock ”
Get high-quality paper
Helping students since 2015
Stay Safe, Stay Original