What is Musical theatre and what makes it different than any other theatre with music forms, especially Opera? Musical Theatre  The art of music, dance and drama have been linked together since the dawn of time and are still really connected with one another that it is inadvisable to try to tell the difference between them too definitely.

It is rare a production has no music in it whatsoever. Most plays either call for music or may be enhanced by the addition of music.

Don't use plagiarized sources.
Get Your Custom Essay on Musical Theatre Just from $13,9/Page

The characters would play or sing, accompanying themselves or accompanied by others. The music in theatre plays in the distance or from on stage electronic source. Usually, live ensemble or live band plays music on stage or at the wing of the pit. The word ‘musical’ started life as an adjective rather than a noun, and there are some people who think it should stayed that way. Musical theatre is a form of theatre that combines songs, spoken dialogue, acting, and dance.

The story and emotional content of the piece – humor, pathos, love, anger – are communicated through the words, music, movement and technical aspects of the entertainment as an integrated whole. Musical theatre in Europe dates back to the theatre of ancient Greece where music and dance was included in stage comedies and tragedies during the 5th century BCE. It’s a development of musical comedy or opérette. Theatre with song and dance became more popular in the 1600 -1700’s. Soon musical became very popular in France, Britain, and Germany.

The music in musical theatre helps to support as a storytelling device. The songs that they use in the play would help to describe their situation or plot or simply describe their feelings.  Although musical theatre overlaps with other theatrical forms, it may be distinguished by the equal importance given to the music as compared with the dialogue, movement and other elements of the works. There are only slight differences between all of them, which make it very hard for the people that don’t know anything to distinguish them.

Musicals are performed all around the world. They all have similar idea of the performance, just different styles. The countries that perform musical theatre a lot other than America are Netherlands, Italy, Sweden, Mexico, Brazil, Argentina, Russia, Turkey and China. Figure 2 – Broadway, New York 6

They may be presented in large venues, such as big budget West End and Broadway theatre productions in London and New York, or in smaller fringe theatre, Off-Broadway or regional theatre productions, on tour, or by amateur groups in schools, theatres and other performance spaces.

The staging for musical theater is not so different from the usual theatre staging. They just have to keep the stage pictures fluid and interesting, and give a central focus to the main character. One difficulty in musical theatre staging is the direct consequence of the use of amplification. The voice are miked and transmitted through speakers in a mix with the orchestral sound, so the audience won’t hear them acoustically. The costumes that they wear depend on the story that they’re telling. The thing about musical theatre is that it’s really free. As long as there are a lot of music and dancing and everything, it is considered a musical theatre. Doesn’t really matter how the stage looks like, or how do the actors dress up like, there are no boundaries. It goes according the type or story.

Types Of Theatre With Music

There are 7 types of theatres that are very similar or are considered as musical theatre; opera, operetta, comic opera, musical revue, musical comedy, musical play, and concept musical.

Opera is the oldest form of musical theatre. It is “Total Music”, they do not speak at all, even in conversations. The show is all about the music as in, the music is the main focus and everything else in the production is secondary. Operetta’s music is lighter than operatic music. The singer or actor speaks lines rather than sings them. The plots are flimsy and serve only to connect one song to another. All the plot, character, and acting are incidental to the music. The music must be well written and actors have to be accomplished singers. Comic opera is the offshoot of an Operetta. It is usually humorous or satirical. It is also considered an opera with a happy ending and in which some of the text is spoken. Musical Revue is a type of multi act theatrical enter­tain­ment that uses any combination of music, dance and sketches. It is a loosely connected series of production numbers. Figure 4 – Guys and Dolls, an example of musical comedy 7

Musical comedy is a combination between the elements of musical revue and the elements of Operetta. The music is always the most important element. The plots are usually fairly weak. All the characters are more believable. Dialogue they use is clever because it’s also comedic and it has to be creative. The emphasis of Musical Play is on the character. There are real people in real life-like situations. Acting and choreography as well as music are integral to the production as a whole. It usually contains good story, clever dialogue, interesting characters, well-designed choreography, bouncy tunes, and also meaningful ballads. Concept musical is a musical where the show’s metaphor or statement is more important than the actual narrative. It was built around a single theatrical idea. The plot is secondary to situation. Usually, they are a series of independent scene loosely tied together. A director of a concept musical is more concerned about how the show is handled than what it has to say.

From the slight differences between all of these types of theatres mentioned, most people would still be confused with the difference of musical theatre and opera. Both forms can be comic or serious, long or short, ‘sung through’ or partly spoken. Both may or may not contain dance, choral singing, or other musical-related things like rhymes.

Operas tending to be written in classical ‘long form’, with strong sense of overall thematic unity, and musical theatre tends to be written as a succession of ‘short form’ songs. Opera singers mostly use a highly developed head voice when they sing, while musical performers tends to sing more on the chest, but then again, not exclusively so.

Musical theatre performers are usually required to sing eight shows a week, and they could not possibly sustain that number of performances without some electronic help, especially when they are competing with electronic instruments on stage. Opera singers rarely sing their roles more than twice or three times a week, almost always without amplification, but even this is starting to change because many opera houses sneaking in subtle forms of ‘voice enhancement’.

These inconsistent and often insignificant differences between the two forms are more associated with the way the works are perceived by their audiences than with any fundamental artistic quality they might have. Those differences have more to do with the manner in which the two forms are written and brought to the stage than anything fundamental to do with their form or content. 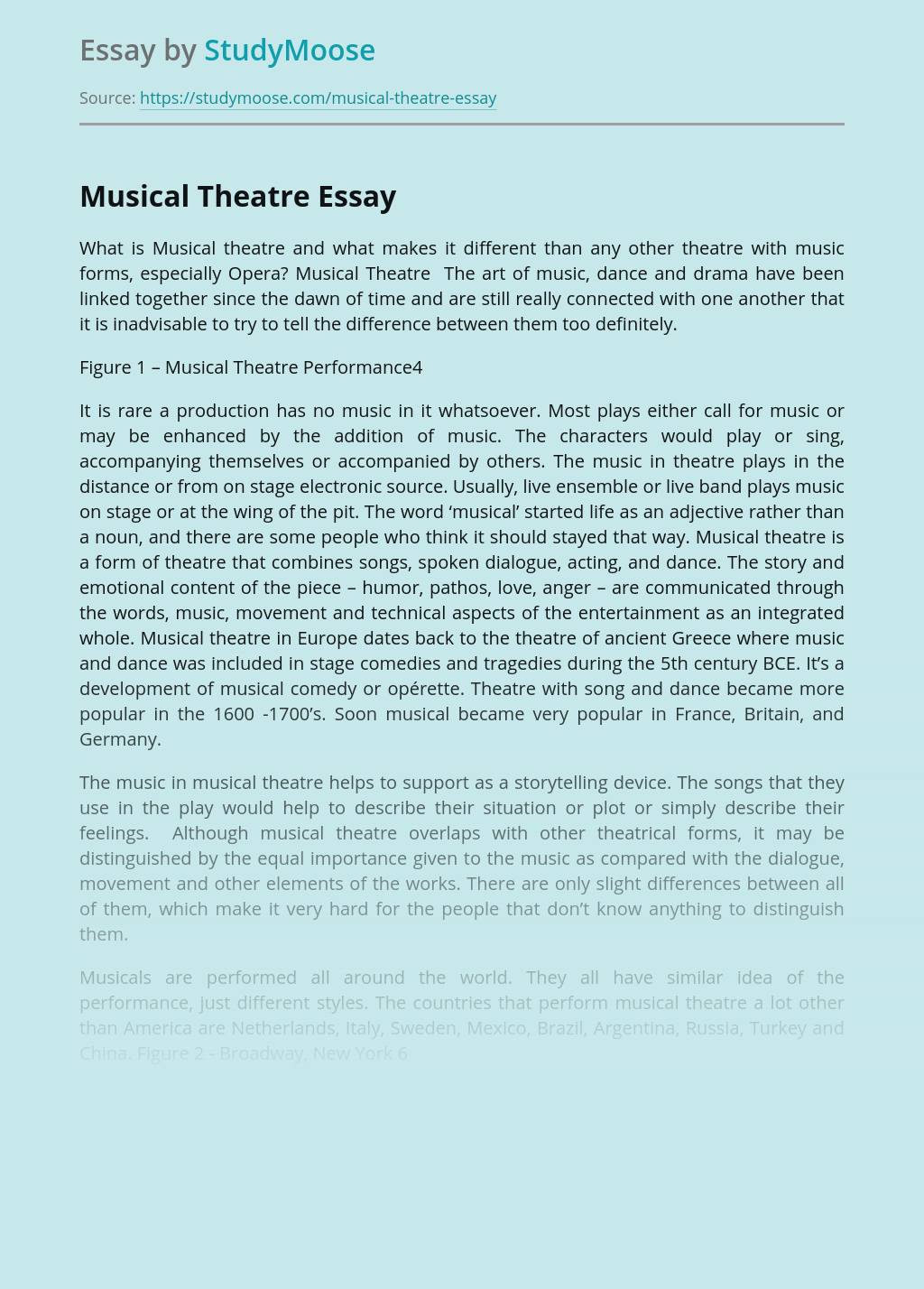 The power of music

Did you know that music have some special power that help our mankind too? Most people love to listen to music because music give us feel comfortable. That is why people are create several types of music such as hip-hop, rock, pop-rock, pop, metal, classic and jazz. Music had been with human for such a...

The History of African Music

Get Essay
Music of the World

1.What is popular music? Popular music is any music since industrialization in the mid-1800s that is in line with the tastes and preferences of the middle class. 2.What theme does pop music typically use in the lyrics? Describe one pop song that uses this theme. Why is this theme such a popular one? One theme...

Music of Cuba and Puerto Rico: A Comparison and Contrast

Music is an important aspect of both the Cuban and Puerto Rican cultures because music forms part of everyday life. To the people in these countries, music is a way of expressing unity and belongingness. The European explorers, particularly the Spanish, who came to Cuba and Puerto Rico (Thompson, 1991) enriched music in both countries....

We live in the age of information; where our generation needs some sort of communication in various ways. Weather it may be through music or books, there are several variations on communication, just depends on how you want to target them in order to get the information across. Both music and books have similarities as...