British humor has a reputation for being puzzling to non-British speakers of English. Nonetheless, many UK comedy TV shows which use it as a basic have been internationally popular. The most of use theme for British comedy are:

Turn in your highest-quality paper
Get a qualified writer to help you with
“ Mr. British Humor – Mr. Bean ”
Get high-quality paper
NEW! AI matching with writers

It is generally referred to as a comic or a comic magazine, and historically as a comic paper. British comics are typically aimed at children, and are published weekly, although some are also published on a fortnightly or monthly schedule. To any English comedy fan or hopefully, anyone English who is capable of understanding humor-Rowan Atkinson is a well known name. This is the man who brought us Black Adder I trough IV, The Thin Blue line, and Mr.

Bean. And it’s for this rubber-faced inept buffoon that he’s best known worldwide-thanks to the success of the 1997 movie of the same name, which as I recall was supposed to catapult him into superstardom. It didn’t happen and five years down the line Atkinson’s trying the all movie career reboot with Johnny English, a spy spoof movie based on a series of commercials for a credit card.

Rowan is a man who brought us Black Adder I trough IV, The Tine Blue Line, and of course Mr.

Bean. Thanks to the success of TV series Rowan is famous in all world. Some of the best movies and TV series are…

Since his first appearance in 1989, Mr. Bean has achieved a massive following around the world – he’s now recognized as the most popular British comedy export since Benny Hill. Some people even thinking of him as sex symbol. His visual humour and celebrate sight gags transcend linguistics frontiers, and have earned comparisons with the great silent movie star Buster Keaston – although apparently his character was based on the work of French comic genius Jacques Tate. Mr. Bean is a British comedy television series, starring Rowan Atkinson. The programmed was produced by Tiger Television, later renamed Tiger Aspect productions (a company in, which Atkinson has a stake), for the Thames Television and originally shown on ITV. It is written by Atkinson, Robin Driscoll and Richard Curtis. The first episode was broadcast on 1 January 1990, with the final episode, “Goodnight, Mr. Bean”, on 31 October 1995.

In the United States the show has been broadcast on the PBS intermittently over the past few years and is now available on DVD. In the show, Atkinson plays a selfish, sometimes ingenious, and generally likeable buffoon who frequently gets into hilarious situations due to his various schemes and contrivances. The show relies upon physical comedy, with very little dialogue. It features Mr. Bean trying to undertake what would normally be considered simple tasks, such as going swimming or taking an exam. One of his acts, most beloved by fans is stuffing a turkey and getting it stuck on his head. The popular US sitcom Friends later reused this same joke.

The humor largely comes from his original solutions to any problems and a total disregard for others when solving them. Mr. Bean is the only significant character in the program (save for Teddy, his lovable stuffed teddy bear). Other character exist simply as foils for his various antics, and besides the star, there are only two recurring supporting characters; his sometime “girlfriend” Irma Gobbl (played by Matilda Ziegler) and Mr. Sprout, who often seen in a light blue Reliant Regal superman.

Mr. Bean is alone in the world, is frequently childlike, and often seems unaware works. A movie, Bean, was made based on the show in 1997, but this broke from the show’s tradition by using a subplot with more developed characters. Instead of being the sole center of attraction, Mr. Bean here played second fiddle to the travails of a typical suburban Californian family. Many fans of the original series were quite disappointed with this Americanization and break from format.

The character was revived again in the 2002 animated series, Mr. Bean, again featuring little soundbites or mumbling. Some people have questioned the point of an animated Mr. Bean-although he is now capable of far stranger adventures (and facial expressions), they lock the interest generated when it was an actual person doing it. The series is notable, however, for following up on the “alien” origin theory for the character, with its final episode revealing a race of identical Beans. Not the Nine O’ Clock News

Before The Thin Blue Line, before Mr. Bean, before Blackadder, Rowan Atkinson starred in (and wrote for) the BBC’s collection of topical comedy, Not the Nine O’ Clock News. Running from 1979 to 1982, the show was what Americans have compared to a half-hour long version of the “Weekend Update” segment on Saturday Night Live (although not everyone would agree with that). Pamela Stephenson who wound up on SNL a few years later, also appeared on Not the Nine O’ Clock News along with future Alas Smith & Jones stars Mel Smith and Griff Rhys Jones. A better American show to compare this to would be HBO’s 1983 series Not Necessarily The News, which many remember for the Sniglets segments besides the news paradise. It was a direct, American style, of Not the Nine O’ Clock News, and lased until 1990.

The sleepy English hamlet of little Wallop is about to receive a rude awakening, as the absent-minded Reverend Walter Goodman, his dissatisfied wife Gloria, and their two children, Holly and Petey, await the arrival of their new housekeeper, Grace Hawkins.

Set in contemporary London in the two months before Christmas, it weaves together a series of touching and hilarious stories, which end in not one, but lost and lost of romantic climaxes on Christmas Eve.

During the course of the story we follow our hero as he attempts to single-handedly save the country from falling into the hands of a despot.

Scooby and the gang will have to forget everything they know about fake ghouls and phony creatures to crack the case, save themselves and possibly the world.

Donald Sinclair owns the biggest, snazziest, flashiest, high rolling-est casino in Los Vegas. And to entertain some of his wealthiest patrons, he’s created the most original high stakes game that SinCity has ever seen.

Bean works as a caretaker at Britain’s formidable Royal National Gallery, and his bosses want to fire him because he sleeps at work all the time, but can’t because the chairman of the gallery’s board defends him. They send him to USA, to the small Los Angels art gallery instead, where he’ll have to officiate at the opening of the greatest US picture ever (called “Whistler’s Mother”).

Four Weddings and a Funeral

A young boy stumbles onto a witch convention and must stop them, even after he has been turned into a mouse.

Rowan Atkinson returns as the hilarious, legendary character Mr. Bean in the long awaited launch of Mr. Bean on DVD. Delighting all ages with his madcap antics, fans can relive classic Bean episodes whilst younger family members can be introduced the crazy world of Mr. Bean.

A comedy about a couple who are trying to conceive a child.

It was a pleasure to write about one star like Rowan Atkinson. The first what I thought about this man was that he is just Mr. Bean, but it is not like that at all. He did lot of another things. He is very special and complete person. He makes me laugh even when he doesn’t act. I really enjoyed doing my work about him because, every time I saw a picture of him picture I laughed. I hope that you find out that Rowan Atkinson is not just Mr. Bean, that he is a family man, actor, writer, producer … We all should enjoy in our lives and try to make our days much funnier, because only that is the only way to live longer. I hope I managed to show what humor really is. Every nation has its own way to make us laugh and no matter how, it is important that we accept it in a good way as they want us to do. After all this I only can say that we all should laugh more because it is very god for health and it helps us to be in a good mood. 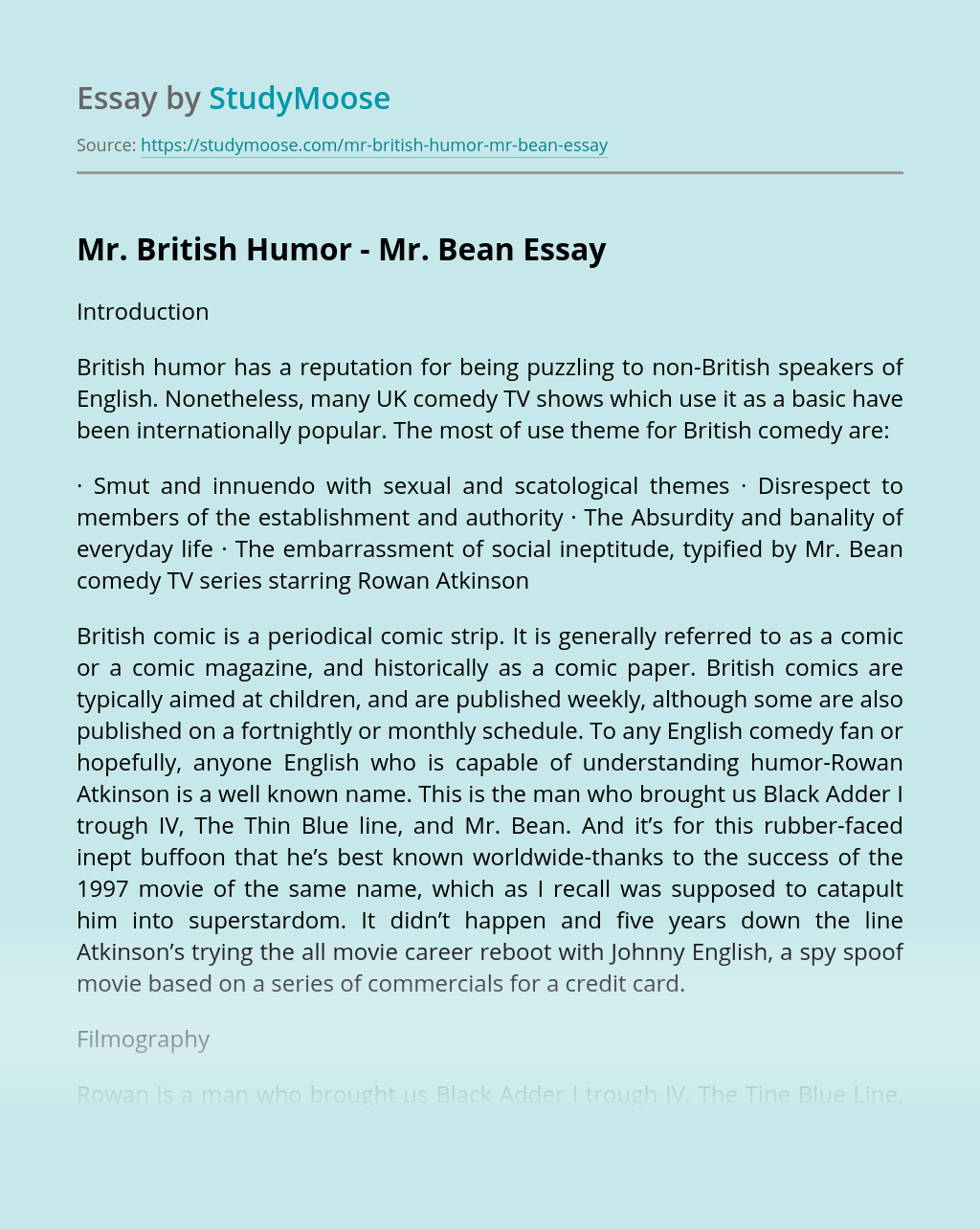 Turn in your highest-quality paper
Get a qualified writer to help you with
“ Mr. British Humor – Mr. Bean ”
Get high-quality paper
Helping students since 2015
Stay Safe, Stay Original