The purpose of this project is to determine the effect the size of an automobile’s wheel radius will have on that vehicle’s performance. To determine this, the distance a car travels when tested with the same propulsion force but different wheel diameter is measured. We expect that there will be an optimum size that should be utilized in order to achieve maximum efficiency. A larger or smaller wheel size should change the distance that the car will travel. The cars we will test will be made of common and inexpensive materials.

Turn in your highest-quality paper
Get a qualified writer to help you with
“ Mousetrap Car ”
Get high-quality paper
NEW! AI matching with writer

The design of the cars will consist of simple wheel and axel setups and a lever; two simple machines that can be used to cause forward movement. The means of propulsion for our cars will be spring-loaded mousetrap with a length of string that connects to the axel supporting the wheels being tested.

As the trap is set the lever will pull the line and thus rotate the axel causing movement.

The size of the wheel should have a direct relationship with the distance that the car will travel. Small wheels will require more revolutions to move the same distance while large wheels will require more torque to make them begin to turn. The goal of the project is to find the most efficient use of the energy provided by the mousetrap for both speed and distance by adjusting the size of the wheel. A mousetrap car is a combination of two simple machines designed to operate much like a gas-powered car.

However, a mousetrap is used instead of an internal combustion engine for the motor. The most common design involves positioning the mousetrap on the chassis of the cars and attaching an extended lever on the trap to one of the car’s axles by using a length of string.

The end of the string on the mousetrap is tied to the arm of the trap while the opposite end is wound around the axle. When the mousetrap is “loaded,” potential energy is stored. The pulling force of the arm turns the potential energy into kinetic energy, causing the wheels to turn and boosting the vehicle. The mousetrap will provide a limited amount energy that the car can use as propulsion force that causes forward movement. The length of the string connecting the lever on the trap to the axel will remain constant through out the duration of the experiment. This will ensure that each of the wheel sizes will receive the same amount of energy. The wheels will also be made of the same material so that each will have the same traction, be about the same weight, and attach to the axel in a similar fashion.

A circumference of five inches will travel 25 inches in five revolutions while a circumference of three inches will travel only 15 inches with the same number of revolutions. The larger wheels seem to make more efficient use of the revolutions provided by the springing mousetrap. However the larger diameter also requires more energy to make them revolve. The energy required to turn an axel is known as torque. The more torque an engine (or a mousetrap) can provide, the faster the car will accelerate.

Acceleration is also important to the efficiency of the mousetrap car. The faster a car can accelerate, the more momentum it can build up. Momentum is a force that keeps moving objects moving in the same general direction and force until some outside force acts upon the object. Momentum will conserve the energy from the mousetrap while providing thrust. If the wheels are too small, the axels will have to revolve more times to build up any significant momentum. If they are too large, they will require much more torque, which would reduce the amount of energy available to turn the axel once momentum is built up.

Friction also plays a major role in the performance of mousetrap-powered cars. Friction between the car’s wheels and the surface it is traveling on is beneficial to the operation of the vehicle. This traction helps the wheels to propel the cars across further distances and at greater speeds. However, friction can also occur between the axles and the cars, which can be detrimental to performance. To combat this, lubricants are used on the axels where they are in contact with the chassis of the car. Also, more mass involved with the rotation of the axels will cause more friction. Therefore, heavier cars will be much less successful than vehicles using much lighter materials due to the amount of friction and inertia, which will not allow the car to travel as far or as fast under the same conditions.

The design used in the testing phases of the experiment consisted of thin pieces of plywood for the chassis and axel supports while 3/16-inch dowel rods were used for axels. The wheels were made of three sizes of circular pieces of foam board supported by a slice of a cardboard tube. A standard sized mousetrap was secured to the chassis and a 3-inch length of copper pipe was used to lengthen the lever to provide more mechanical advantage. A two-feet length of nylon string was secured to the copper pipe and the rear axel.

The wheels were attached to the axels with rubber cement. The various larger sizes were designed to fit over the smallest ones that were attached to the axels. A single front wheel was used throughout the experiment Tests were ran to determine how far the car would travel and how fast they traveled a distance of five and feet. Each wheel size was tested three times and the results were then averaged:

Our results show two distinct characteristics. The larger wheels traveled a significant amount further than the smaller wheel sizes. However the smaller wheels were capable of quicker acceleration than the larger wheels. Since the wheels all had about the same amount of mass, the amount of friction did not increase of decrease enough to effect the results significantly. The wheel sizes could thus be adjusted depending upon the type of race the car was involved in; distance, in which the largest wheels would be used, or speed, in which the smallest wheels would be used.

Experience in the design and function of the mousetrap cars would help us to design an even more efficient vehicle. Two layers of foam board would probably be used to cause the wheels to be more level and stable. Also, a longer lever would likely be attached to the existing lever on the mousetrap so that more advantage is achieved. 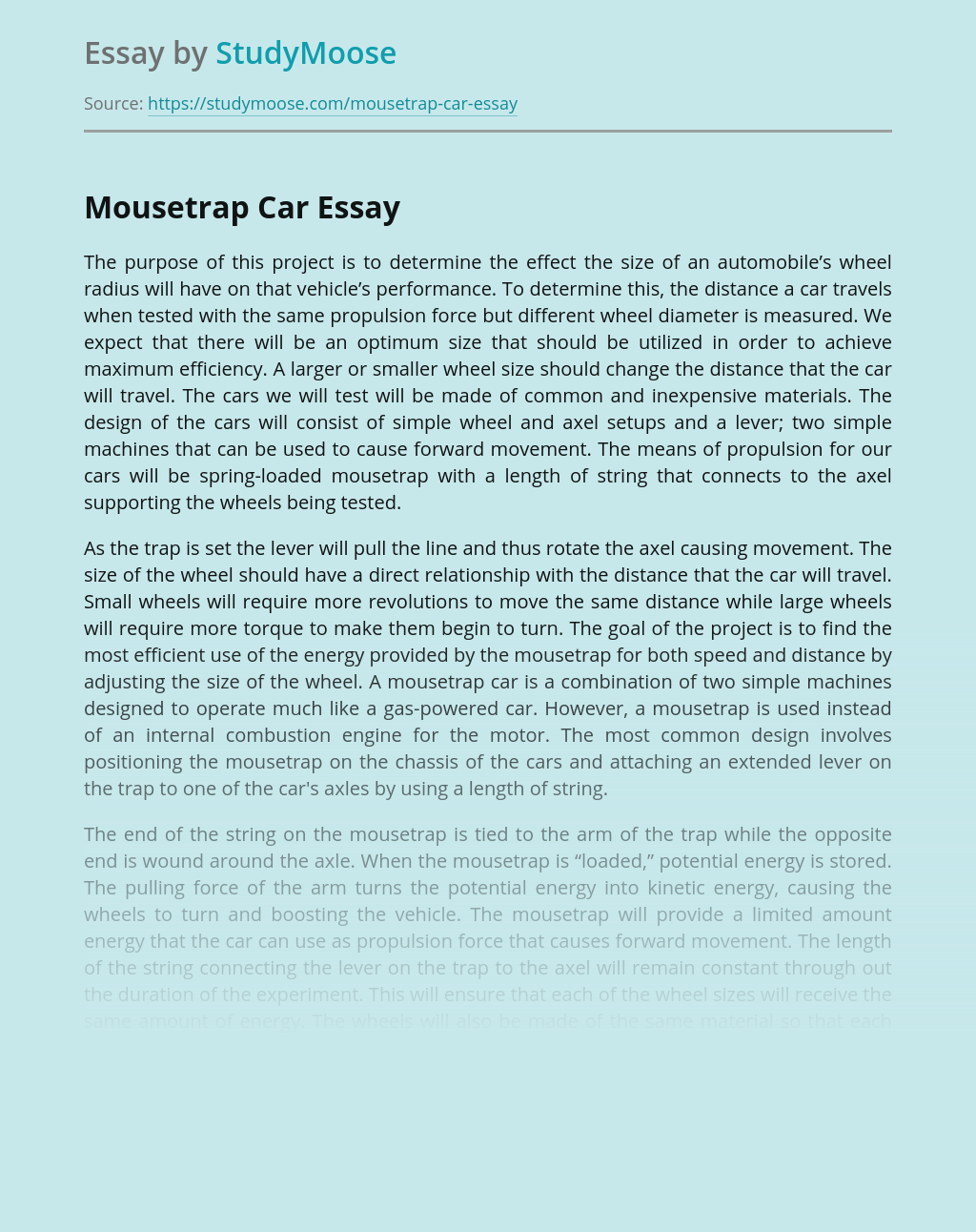 Turn in your highest-quality paper
Get a qualified writer to help you with
“ Mousetrap Car ”
Get high-quality paper
Helping students since 2015
Stay Safe, Stay Original