One of the most prominent features of the present century is the progress of science and its effects on almost every aspect of social life. Nowadays, more and more new things invented to make our life more comfortable and convenient. It is difficult for us to point out which inventions changed human’s life the most, but in my opinion the three most remarkable inventions changed the world the most are the creations of electricity, aircraft and computer. Firstly, electricity actually becomes necessary in human beings’ life, it has contributed much in manufacturing, curing and operating machines.

Don't use plagiarized sources. Get your custom essay on
“ Most important inventions ”
Get custom paper
NEW! smart matching with writer

If the power of electricity had never been existed we wouldn’t have even a fraction of what we have in the world today. No electricity also means that there is no TV’s, no computers, no air conditioning… Indeed, we cannot even imagine how we would live in absence of electricity in modern times. In addition, many diseases are treated by electric treatment today.

Surgeons will not be able to carry on their instruments and machines without electricity. For example, X-ray machine which enables the doctor to take the photograph of the internal parts of the body can be operated only with its help. This is an industrial era.

Many big and heavy machines are used to generate foods, goods, clothes….Nonetheless, such machines works only with the help of electricity. In some progressive countries, like Japan, electric power is used in almost all the factories, a power cut in one day could lead to the deadlock.

For this reason, electric power is really useful in production as well as the growth of industries. The second invention I believe that it has great impacts on our social life is the creation of computer. It would actually be difficult to say when the first computer was made but Charles Babbage was the first one to conceptualize it. He called it ‘The Analytical Engine’ though he never could build it. In fact, computer is the extremely important Invention because it helps us to display and save information; this invention is also applied in almost all fields. In olden times, storing information had many disadvantages. You had to write information on the papers and then store them a certain place. As a matter of fact, the data could be lost after a long time due to old paper, wood-borer .

However, today it becomes easier and more convenient with computer. You just type the information you need, save it and it is done. You do not need many shelves to save data anymore. On the other hand, you can edit them as you like and you can save them as many files as you want. PC actually is utilized in almost all fields such as studying, working and entertaining. For instance, people can use computer for presentation, planning a project, playing videogames, watching TV and listening to music. The last but not least is the invention of aircraft. All of us cannot deny the creation of aircraft has changed the way of our traveling. The airplane is not only one of the greatest inventions in the 20th century, but also one of the most wonderful scientific creations of the human history at large. This mean of transport made it possible for people to work in places miles away. The existing of aircraft has turned long and exhausting journeys into a trip completed within hours.

Also, the people from divergent parts of the world could travel from one region to the other quickly, thereby exchanging different aspects in social and cultural experiences. It is one of the crucial factors that help business expand to global market. Furthermore, children can attend school in distant countries. In the past, this was impossible. Hence, the children of today are better educated than those of the past. Thanks to the creation of aircraft, human beings became more dynamic, they are able to do business in foreign lands and visit various countries all over the world. Scientific inventions have made this world worth living. They help our life become more comfortable and convenient. And three of the inventions modifying deeply the way we live are the creations of electricity, computer and aircraft. We can sure that these changes will not stop there, these inventions have just built the foundation for the future scientists to create more and more inventions, and we cannot imagine how our life would change in the next few years. 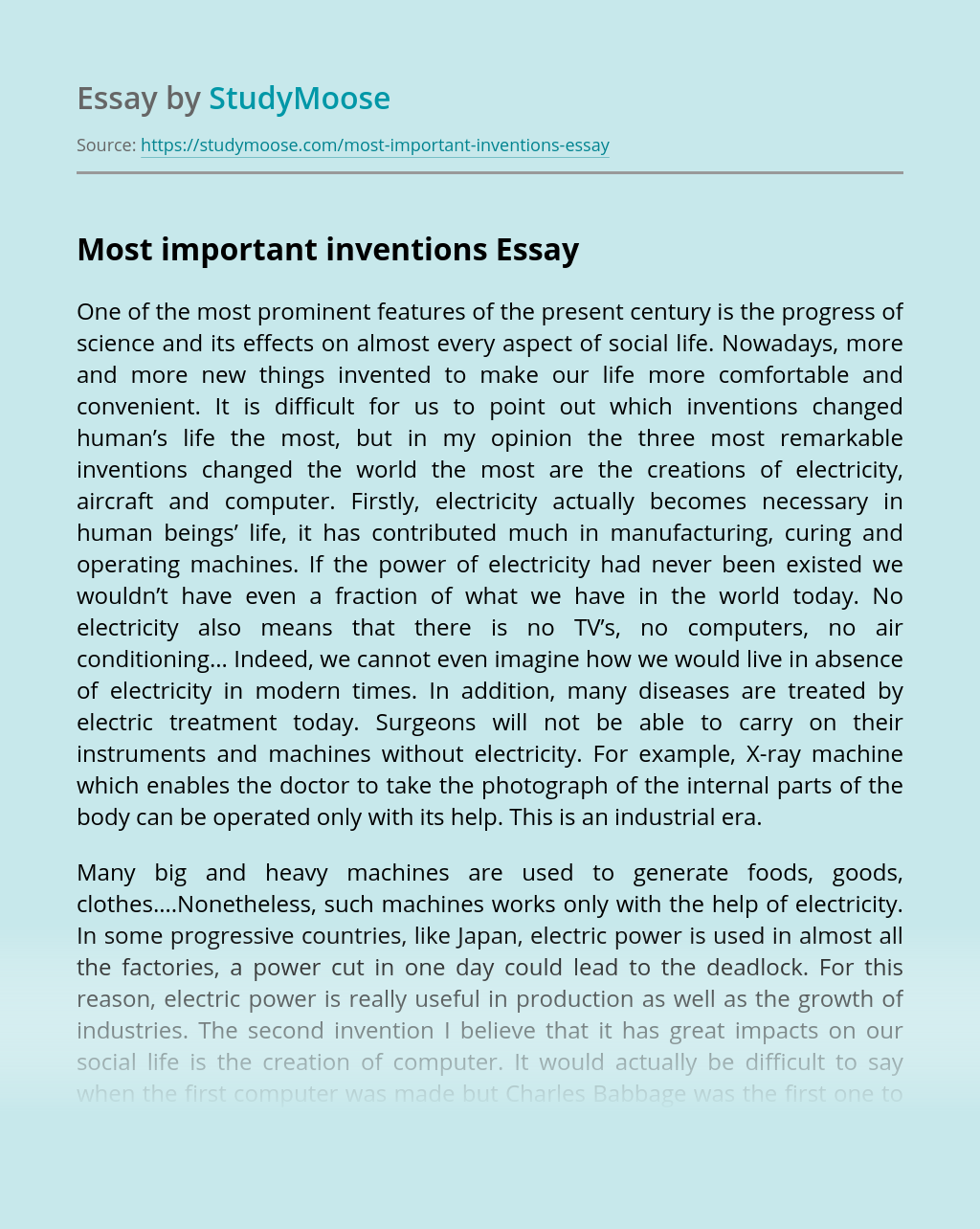