Moral Virtue According to Aristotle

According to Aristotle, we get moral virtue as a result of habit and none of the moral virtues arise in us by nature, because nothing that exists by nature can form a habit contrary to its nature. Nature has no effect on how moral virtues arise in us. Instead, we receive nature when we adapt, and therefore are made perfect by habit. A good example Aristotle uses is that we have senses before we even know how to use them. Eventually we learn how to use them by exercising them everyday.

Don't use plagiarized sources. Get your custom essay on
“ Moral Virtue According to Aristotle ”
Get custom paper
NEW! smart matching with writer

Another good example is that “men become builders by building,” which states that if one has never been taught to do a certain task before, he/she will have a high degree of difficulty performing that specific task. Aristotle stated that “it makes no small difference, then, whether we form habits of one kind or of another from our very youth; it makes a very great difference, or rather all the difference,” which means that from our early upbringing is where we develop our virtues that will make each person who they are.

Many people are said to have “natural talent,” but Aristotle’s view disagrees in the sense that those who are naturally talented have developed their virtues by learning and experiencing those virtues in their youth. Aristotle’s belief of virtue comes from our interactions with nature that form habits in us. He says we must learn to become virtuous by forming the right habits when we are young.

According to Aristotle, virtue is in choice lying in the mean.

The mean is relative to the individual; which is to say that in each situation there is a different mean and therefore a different way of going about acting virtuously. Because the mean is different in each situation, it is up to the individual to identify it and practice virtue by going about the situation correctly. Aristotle gives the example of courage in the reading. Courage is a mean in the situation, which calls for fear and confidence.

Courage becomes the mean because it does not make the mistake on either side of the situation’s possibilities of you as an actor; it is the correct action to take. Aristotle believes that virtue is hard and the task of being good is not easy. The reason for it being hard involves using the system in real life. Using the system in real life is hard because in the example of courage, you are not going to have such a simple choice. It will always be more complicated and mistakes almost must be made.

Moral Virtue According to Aristotle. (2016, Dec 13). Retrieved from https://studymoose.com/moral-virtue-2-essay 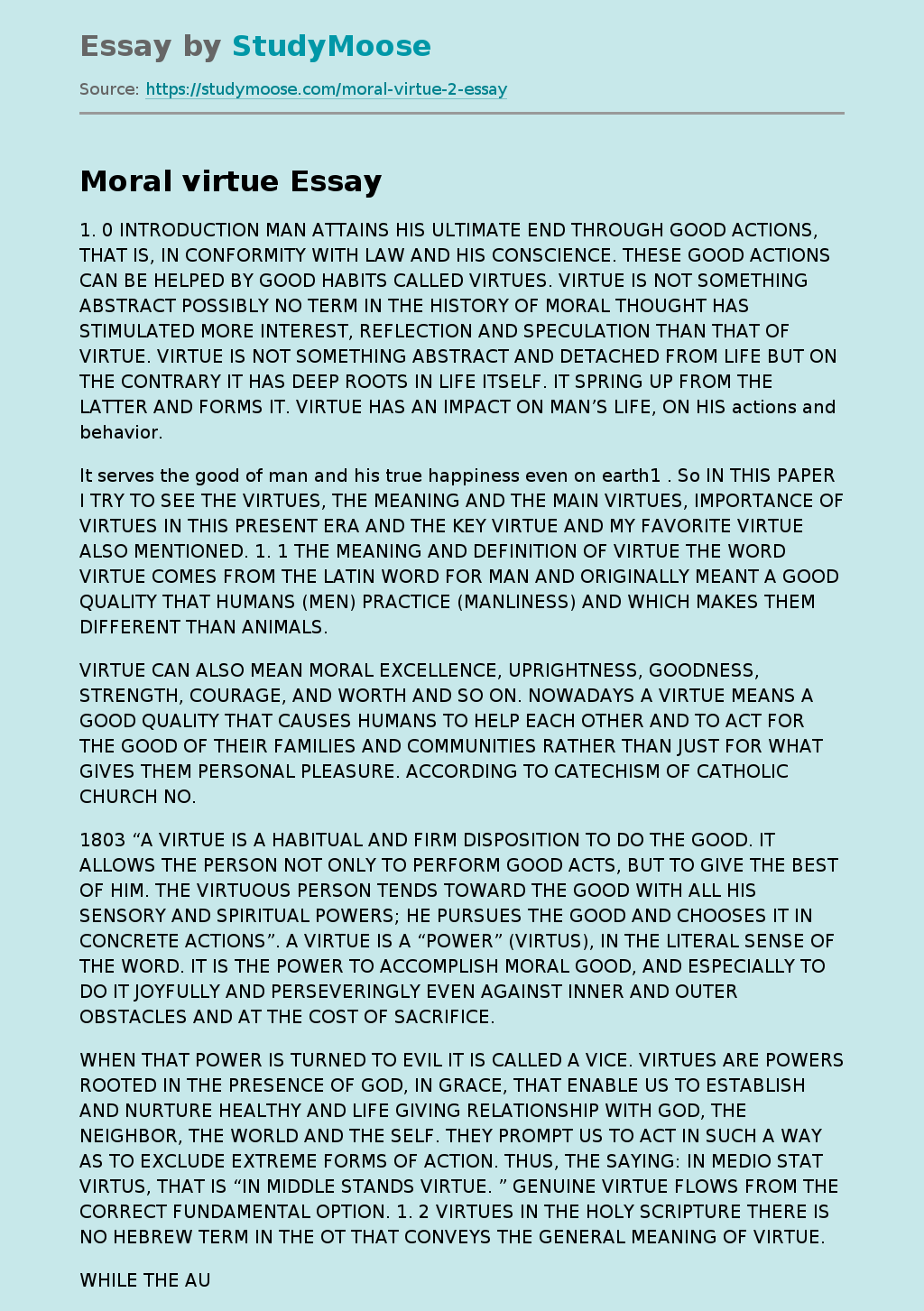