Standard money is the monetary unit recognized by the government as the ultimate basic standard of value upon which all other kinds of money are convertible. In the Philippines, the monetary system is the managed currency system, and the monetary unit is the Peso.

Don't use plagiarized sources. Get your custom essay on
“ Monetary Standard ”
Get custom paper
NEW! smart matching with writer

A. Commodity Standard is a monetary system in which the purchasing power or value of the monetary unit is equal to the value of a designated quantity of a particular commodity or set of commodities sometimes called full-bodied money because it is one hundred percent (100%) backed-up by gold or silver reserves

2) Bimetallic Standard- when each of two metals provides the basis for the money in circulation and the issuer stands ready to buy or sell either of two metals at stated prices, the monetary system is called a bimetallic standard – May also be defined as a monetary system in which coins of two different metals at a fixed legal ratio of weighs and fineness are used as the monetary unit or the standard unit if value – Legal ratio /coinage ratio/mint ratio refers to the ratio between the weights of gold coins and silver coins in the mint – Market ratio refers to the ratio of the value of gold and silver as being bought and sold in the market Gresham’s Law states , that the bad or overvalued money drives out the good or undervalued money from circulation. Given a sufficient supply of bad or overvalued money which has the qualities of general acceptability, the good or undervalued money will be displaced by the lighter or overvalued money. The law operates whenever the market ratio of silver to gold shifts away from the mint or legal ratio.

B. Non-Commodity or Fiat Standard- refers to a monetary system in which the face value of the monetary unit is much higher than that of the value of the material used as money

Utopian Paper Standard/ Pure Fiat Standard- proposes the adoption of standard money that is desired primarily because of what it can buy for the individual and not because of its gold or silver content. This is the forerunner of the Involuntary and managed currency system. Involuntary paper Standard- adopted by a country that finds itself in a dilemma of not being able to redeem its currency in either gold or silver and so is forced by circumstances to adopt the involuntary paper standard.

This is often the standard used during wartime. Managed Currency Standard- espouses the use of an inconvertible and irredeemable paper money that is issued against no gold or silver reserves, which is managed by the Central Bank in such a way as to keep the price levels fairly stable by increasing the amount of paper money at one time and decreasing it at another time, using the trade and industrial conditions as the barometer. – People accept this paper money because the government has given it a legal tender power.

Between the 8th and 14th century, the penniform gold barter ring was being used in trading with foreign merchants. It was believed that the Piloncito, a crude rounded gold coin with flat sides and with a diameter of about 3/8 of an inch circulated in the country during the Majapahit Empire. This was believed to have been used for big transactions.

Hilis kalamay was used after the arrival of the Spaniards in 1521. It bore the seals of the Spanish rulers Charles II, Philip IV and Philip V.

When the Spanish regime started in 1571, coins minted in Mexico called cabo de bara de plata where the first coins that were widely circulated during and after the reign of King Philip II. During the reign of king Philip V (1700-1746), the first coin minted in the Philippines was called Spanish Barilla. The coat of Manila was engraved on the center of the coin, The term barya was rooted from this coin. From 1732-1772, during the height of the galleon trade, the Spansih Dos Mundos was used. In 1776, a second coin was minted in the Philippines colderillas. It was about half of the size of the Spanish barilla and was made of copper. It was issued to augment the shortage of the coins circulating due to the Spanish-English War of 1762-1764. The colderillas was easily replaced by the barillas bearing the bust of Carlos III. This coin has the inscription Ciudad de Manila 1776. In 1770, silver quartillos from the Spanish Mexico was minted soley for Philippine circulation

After the death of King Ferdinand VII, his daughter Queen Isabel II became the new monarch. During her reign coins made of silver called Isabelinas were circulated. In 1880, the value of silver peso was higher than that of the American gold dollar. This explains why the Chinese traders did not want gold coins but instead silver and reals. This made Filipinos export the gold coins in exchange for Mexican silver. Their importation continued, which made the silver coins the sole currency in the Philippines. In 1852, the first Filipino bank note was printed called pesos Fuertes issued by the El Banco-Espanol-Filipino de Isabel II. In 1855, the five pesetas made in Madrid or Paris was circulated.

In 1887, the Isabel silver one real was issued and this time the word Manila was engraved on the face. In 1857, Queen Isabel II ordered the establishment of the Manila Mint, and started operation in March 18, 1861. In 1877 a royal decree was promulgated to allow Manila Mint to coin silver coins of the same fineness as the Spanish coins of .835 instead of the .900. In 1880, gold coins minted bearing the bust of king Alfonso XII. However, the people disliked these coins and melted them instead. The government was forced to re-issue the Isabelinas bearing the year 1868.

In 1887, the first Treasury Certificates were issued bearing the official seal of the Philippine Government. It bore the signatures of Clem de Santiago, the Insular Treasurer. In 1897, several coins were received by the Philippines from the Spanish government in Madrid to alleviate a shortage of coins because of the great increase in world trade which affected the country. Six million silver dollars marked Filipinas were circulated. Inspite of this supply of coins remained limited because they were not freely coined, and importation of money was restricted.

Gen. Emilio Aguinaldo’s administration issue paper money bearing the signature of Pedro A. Paterno, the President of the Council of State at that time. Considered as the Second Treasury Certificates that were issued by the Philippines. In 1899, coins in two centimes denomination with the inscriptions Republica Filipina and Libertad were circulated. The Island of Panay and the Province of Tarlac struck their own coins • With the capture and surrender of Gen Aguinaldo, these currencies were withdrawn from circulation and were declared illegal currency

American regime started August 28, 1898 but it was during the Treaty of Paris December 10, 1898 that the sovereignty of the US over the Philippines was established. There were several currencies that were allowed to circulate a. Mexican Silver Dollar or Peso Containing Eight Reals b. American Dollar- the Americans would have wanted US Dollar to be the sole currency in the Philippines but many Filipinos objected since they preferred the Mexican Silver since they are more accustomed to it. The Philippines during that time was effectively under quasi-bimetallic standard since both gold and silver were used. When the Third Treasury Certificates were issued, the US Dollar was withdrawn from circulation

In 1901, Charles Connant, an American banking expert came to the country and recommended the gold exchange standard. Americna Congress acted upon this recommendation and in March 2, 1903 the Philippine Coinage Act was passed. The Gold Exchange Standard provided that the monetary unit of value of the Philippines was a theoretical gold peso containing 12.9 grains of gold .9 fine. The American dollar was containing 25.8 grains of .9 fine so that the value of the peso was exactly one-half of the American dollar. In order to maintain the parity of the silver peso with the theoretical gold peso, a fund known as the Gold Standard Fund was established. The Philippine stood ready to sell drafts from the fund to settle international obligations. The drafts were redeemable into American dollars which in turn were convertible to gold coins.

When the volume of trade increased due to an increased demand for Philippine product, the newly created Philippine National Bank were allowed to issue Philippine Bank Notes to augment the insufficient money supply. These notes were not legal tender, but it was payable to the bearer and the bearer was promised the corresponding equivalent in treasury certificates, a silver peso or subsidiary coins.

Later the El Banco De Las Islas Filipinas known as the Bank of the Philippine Island was authorized to issue its own bank notes. In 1933 , the United States of America abandoned the gold standard when the United States President Franklin Delano Roosevelt proclaimed the gold embargo in his territories and colonies. The Philippines was affected and had to abandon the gold standard. Gold drafts could no longer be redeemable to gold coins but could only be exchanged to US dollars. New types of coins bearing the new coat of arms were circulated.

When the Japanese forces occupied the Philippines, they issued a great quantity of paper bills called the Japanese War Notes. These were popularly known as the “mickey mouse” money. These bills had no reserves, neither was it backed up by any government asset. Peopl were forced to accept these bills and since there was no control in its issuance it became inflationary. The Philippines then was under the Involuntary Paper Standard.

In 1972 after the declaration of the Martial Law the Central Bank of the Philippines adopted the Floating Rate where the peso was allowed to seek its own level in relation to foreign currencies depending on the demand and supply of such foreign currency. 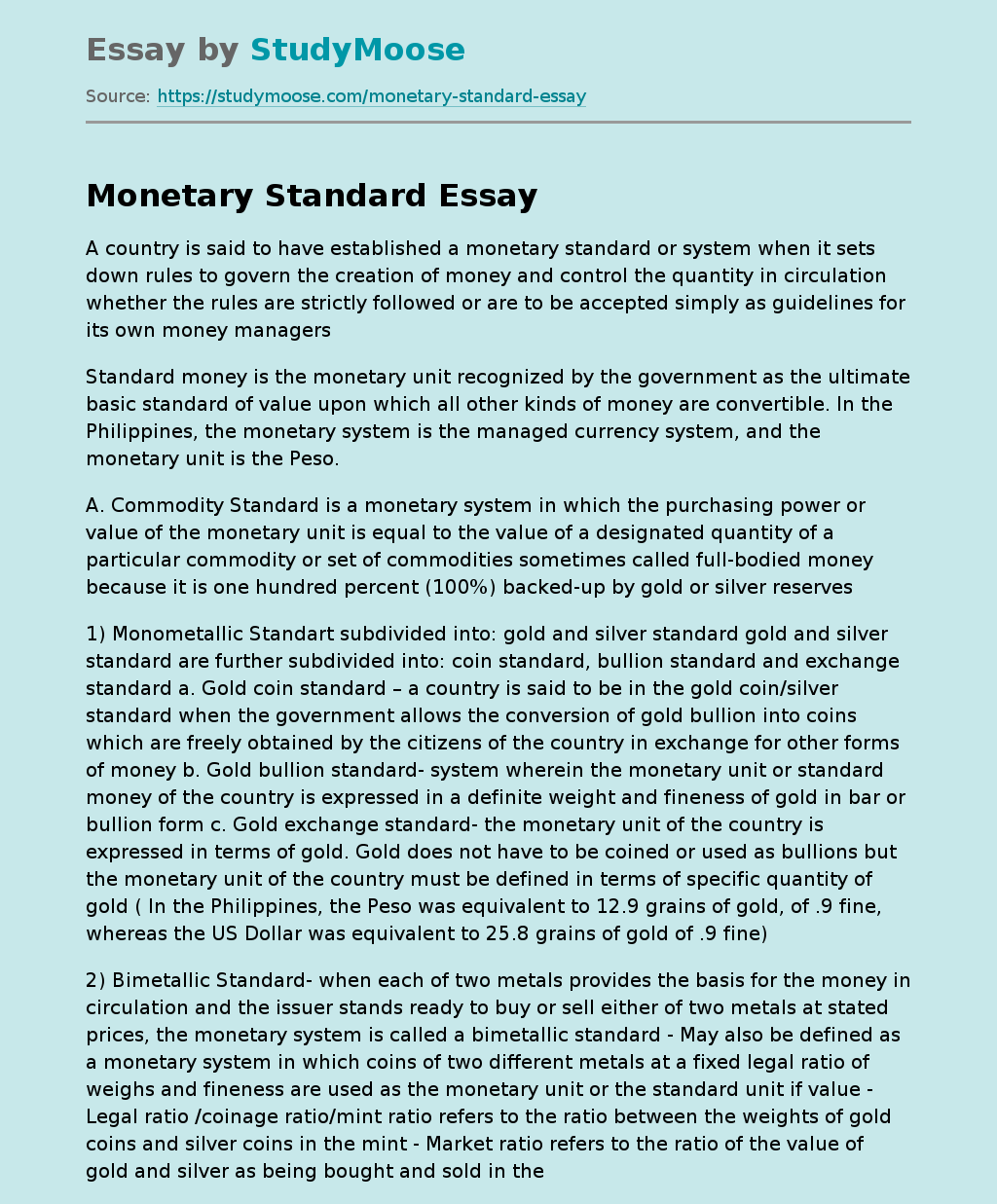