Ethiopia has implemented monetary policy of economy from the time when the period of imperial government by established the national bank. The National Bank of Ethiopia was established in 1963 by proclamation No. 206. Then again, the bank was reestablishing in 1976 by proclamation No. 99 the shape of banks was monetary and banking role admiring to the socialist economic principle that the country adopted. Ethiopia had been ruled by the centrally planning command regime for nearly two decades (1974 ” 1991). For the period of this the macroeconomic variables for instance interest rate, exchange rate and prices of main products were governmentally monitored.

Don't use plagiarized sources. Get your custom essay on
“ Ethiopia has implemented monetary policy of economy from the time when the ”
Get custom paper
NEW! smart matching with writer

Due to this reason there was bringing a macroeconomic imbalance and poor performance in the economy. Following the fall of Dergue regime in 1991 the EPRDF declared a liberal economy system. During 1989, 90-1991/92, broad money grew was substantially higher than the annual nominal GDP growth rate. Despite the negative interest rate on deposits, quasi- money (interest earning deposits) increased by an average, reflecting forced saving by the private sector owing to policies that restructured private expenditure.

4% (EEA, 2006/07). Broad money to GDP ratio reduced from 33 percent in 2006/07 to 27.5 percent in 2007/08 and further to 24.6 percent in 2008/09 but re-surged to 27.2 percent in 2009/10. In 2011/12 domestic liquidity, as measured by broad money supply (M2), reached Birr 189.4 billion reflecting a 30% growth. In 2013 the growth of money supply, domestic credit and foreign asset was increased. But in 2015/16 the national bank focuses on keeping inflation rate to be a single digit. To this end, the National Bank of Ethiopia has made reserve money as its monetary policy special correspondent and closely monitored developments in monetary aggregates. In 2017 money supply is increased to birr 534 billion and the government improve utilization of domestic credit and increase the government deposit. But interest rate is unchanged and the exchange rate has reached birr 22.58/USD (NBE, 2009-2017).The purpose of the evaluation is to look specifically effectiveness of monetary policy channels in Ethiopian economy at macro level. The main outcome of this research is investigating the effectiveness of monetary policy channels, there strengthens of the channels to transmit and importance of this channels by using time series data analysis models. It in the main considerations on the evaluation of the monetary policy instrument channels such as, money supply channels, exchange rate channel, interest rate channel and credit channel effects on Ethiopian economy. 1.2 Problem StatementThe Monetary policy of Ethiopian is ineffective to stabilize the macroeconomic performance of the country. When we have seen the years of 1970s and 1980s, Ethiopia practiced economic problems and poor economic performance. The reasons of this poor economic version of Ethiopian economy are different. But poor macroeconomic policies were the major ones Dournbusch (1993). The main macro-economic variables like money supply, interest rate, exchange rate and price in Ethiopia since 1991 consistently increase. For instance in few years there has been sharp rise in money supply, broad money has grown-up from 30.5 billion in 2002/2003 to 56.7 billion birr in 2006/2007 and still there is also fast growth of money result of growth fiscal deficit and increase government expenditure in the period of 2002/2003 (NBE, 2007). After this the Ethiopian economic growing rate is 7 percent but price rises around 22% (IMF, 2011/2012). It indicates quantity of money stock raises almost three times more rapid than real output growth. Policy responses in Ethiopia during recent years illustrate well the challenges facing monetary authorities. Inflation began to rise already in 2005 in Ethiopia. Primarily, there was little effective response but in 2009 bank-by-bank credit ceilings were so introduced to control money supply growth (IMF, 2011). Also, the birr was devalued by 16% against the US dollar in 2010 to increase competitiveness. Upcoming in 2010 inflation started to rise again, and in 2011 the Ethiopian authorities sharpened the focus on monetary targeting, adopting high powered money as nominal anchor (IMF, 2012). The IMF report of the Ethiopia’s macroeconomic during the past year 2015/2016 has been harmfully affected by a severe drought and the week global environment. Such as the result output growth is decrease to the year 2015/16 to 6.5%. Though, the external current account deficit, assessed at 10.7% of GDP, continued widespread. Interest rate deregulation where the government bonds are sold at market rates is less inflationary and obliges to raise real income the keep of an artificially overvalued exchange rate and credit rationing that considered the era of financial repression are shown to have rate a negative effect on output. Money financing of the budget deficit is highly inflationary while increase in the premium on the informal exchange rate results in decline in real output (Tesfamariam Mehari, 1998). The economic boom where demand overcooks production and treat to create inflation monetary policy channels are used that could counterbalance condition and achieve price stability approach repeated action upon money supply (Johnston and Sundarajan, 1999)As described by Smal (1998), economic decisions such as investing, borrowing, buying and selling are encouraging by the current price and expected future price. High and uneven inflation causes doubt about future prices. More precise measure of policy variability (Aizenman and Marion, 1993): used standard deviation exchange rate, standard deviation of inflation and domestic credit growth, and complex indicators using foregoing variables. Bleaney (1996) the 1980-90 cross sectional study of Macroeconomic instability (measured by the fiscal stability as well as the degree of volatility of the real exchange rate) had a significant negative effect on the degree of economic growth and possibly also a negative effect on investment.Other some studies explain effect of monetary policy on economy in different mechanism for example described by (Mustafa Isedu, 2013) the Nigeria economy is an exogenous response towards short term interest rate has positive effect on real domestic output and consumer price followed by a transitory effect of the broad money. In addition, if real sectors and inflation are expected as monetary phenomena for Ethiopia case and different researchers are focusing on inflation effect of Ethiopian economy from different view, it will be an undoubted fact that this research wills analysis the monetary policy effectiveness over which channels affects real sectors and output. Analysis of such policy channels will have important to gain the consequence of assessments of different theories involving monetary theories. The most well-known monetary policy channels are exchange rate channel, interest rate channel, money supply channel, and credit channel. And analysis strength and importance of these channels to decision of a policy transmission in both short run and long run effects.

Ethiopia has implemented monetary policy of economy from the time when the. (2019, Aug 20). Retrieved from http://studymoose.com/ethiopia-has-implemented-monetary-policy-of-economy-from-the-time-when-the-essay 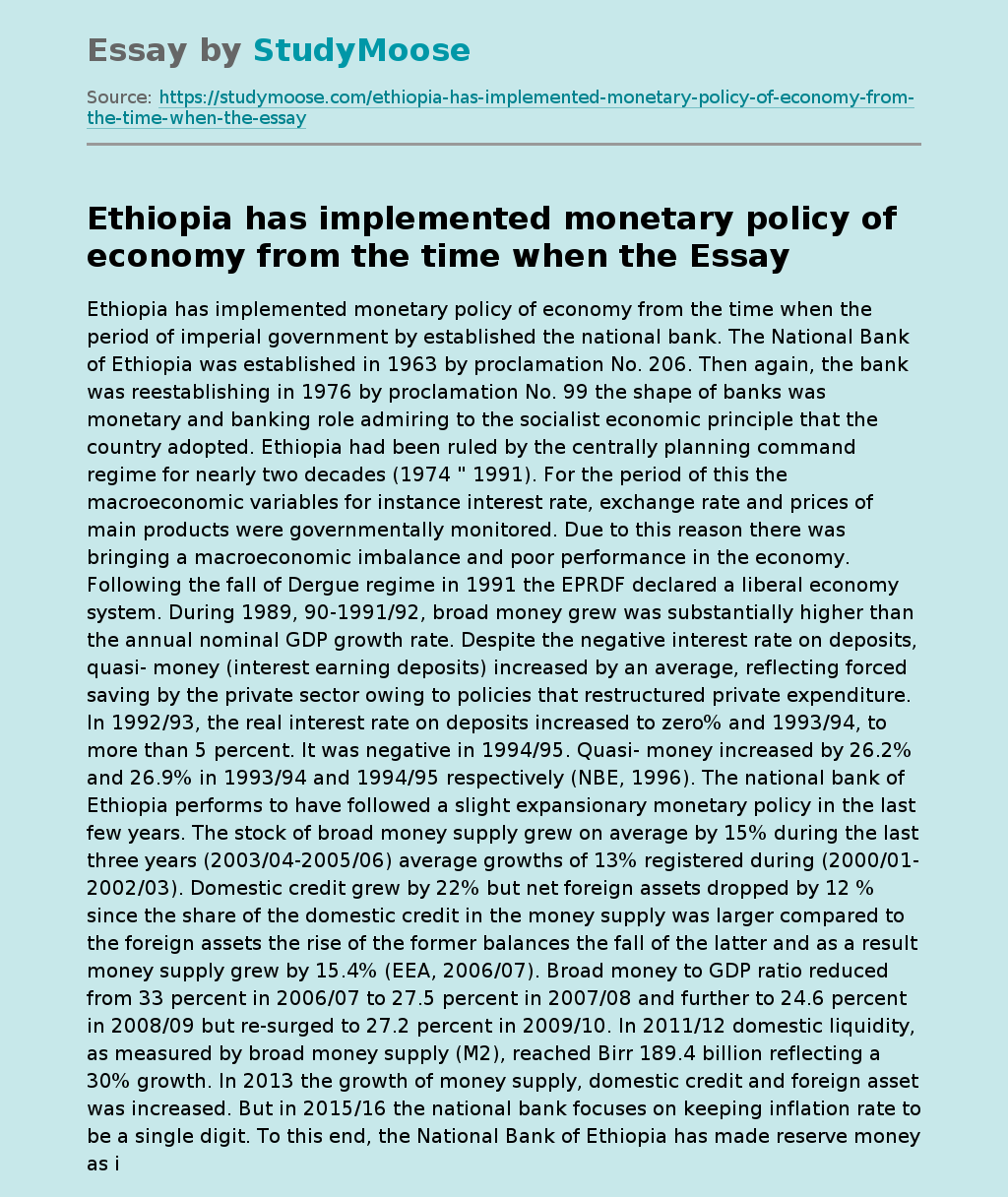