The mind can only be controlled if at some point, the person starts to believe what is being told to them as truth. It is at that point they will question their own opinions. In the novel, The Circle by Dave Eggers, the protagonist, Mae Holland, allows herself to be manipulated by The Circle company. Mae represents herself to others the way she wants to be perceived throughout the book. The Circle lures Mae into their mind game which causes her to become desensitized and without a conscience; ultimately detached from her most intimate relationships.

Don't use plagiarized sources. Get your custom essay on
“ Mind Control in Dave Eggers ‘The Circle’ ”
Get custom paper
NEW! smart matching with writer

It is through Mae’s complete character transformation that The Circle becomes complete.

Healthy relationships starting when we are young play a vital role in shaping the type of people we later become and by fulfilling our need of acceptance. The Circle prides itself on creating a more social society, when in fact it actually isolates Mae from all those she cares about most. Mae’s most important relationships prior to joining The Circle are with her parents.

She is an only child and is very close with her supportive, loving parents. As the novel begins Mae seeks comfort from her parents when she is stressed. She even travels home for the weekend after her first week at The Circle. However, as the story progresses, there is a clear shift in her actions with regards to her relationship with her parents. The narrator even states that, “Increasingly, she found it difficult to be off campus” (Eggers 373).

This is strange because in the beginning of the novel, Mae is constantly at home checking up on her father who had recently been diagnosed with Multiple Sclerosis. Mae’s parents are incredibly proud of her when she is hired at The Circle, especially when she gets them on the company’s health insurance. Her parents had been battling insurance bills because they did not have a secure health insurance plan, however, The Circle’s plan offers them a reprieve. Her parents’ content takes a downward spiral once the SeeChange cameras are installed in their house. At this point, Mae “admits that she hasn’t spoken to her parents in over a week but promises to pay them a visit” (Eggers 361) solely to find out why they covered up the cameras in their house. It is here that the final wedge forms between Mae and her parents. After accidentally walking in on her parents while they are having sex Mae’s transparency camera live-streams this unfortunate accident and all ties of communication are cut off between them.

The next of Mae’s relationships to combust is that with her ex-boyfriend Mercer. From the very beginning Mercer is very vocal about his disapproval of The Circle. In one of their earlier conversations, Mercer states, “It’s people talking about each other behind their backs. That’s the vast majority of this social media, all these reviews, all these comments. Your tools have elevated gossip, hearsay and conjecture to the level of valid, mainstream communication” (Eggers 263). Throughout the book, Mercer does everything he can to defy The Circle and its motives. He disconnects his social media forums, shuts down his antler-business website and even goes as far as traveling up North in an effort to outrun technology’s advancements. Mercer also reverts in communication and only contacts Mae through hand-written letters. Before being pushed to his own demise, Mercer also says that The Circle has, “eliminated my ability to just talk to you. I mean, I can’t send you emails, because you immediately forward them to someone else. I can’t send you a photo, because you post it on your own profile. And meanwhile, your company is scanning all of our messages for information they can monetize. Don’t you think this is insane?” (Eggers 132). As a result, Mae continues to push Mercer to accept the ways of The Circle and simply conform. In the end, Mae and Mercer’s relationship crumbles with the invention of SoulSearch, which allows you to find anyone’s whereabouts. Despite his efforts to stay hidden, Mercer is tracked and located in Oregon. After being found and chased by drones, Mercer fears that he could be chased to the ends of the Earth and sees no other way to escape except committing suicide and driving his car off a bridge. Mae’s indifference and lack empathy for causing Mercer’s death are a direct result of The Circle’s influence.

This influence continues to impact Mae’s core relationships as seen with the deterioration of her friendship with Annie. The two had met in college and when Mae applies for a job at The Circle, Annie vouches for her and gets Mae the job. Their friendship begins to take a downward spiral when Mae begins to gain more popularity among their coworkers. Annie feels threatened by Mae’s quick success, which leads to a constant competition between them. Most of Annie’s signs of jealousy are seen passive-aggressively through facial expression. For example, at the meeting that the gang of forty holds Mae sees that, “alighted on Annie’s face, and because it was stern, and dissatisfied, and seemed to be expecting, or wanting, Mae to fail, to embarrass herself…” (Eggers 390). Moreover, at that same meeting, Annie challenges Mae’s proposition by asking, “How do we do that?” (Eggers 392). Annie attempts to make Mae look inferior at this meeting because she is envious of the attention that Mae is receiving. In a last effort to triumph over Mae, Annie volunteers to be a part of The Circle’s latest project, PastPerfect. In the end, the project causes Annie to suffer from a major anxiety breakdown and she ends up in a coma. While monitoring Annie, it becomes apparent to the reader how bothered Mae is that she cannot read Annie’s thoughts. She decides to, “bring this up with Stenton and Bailey. They needed to talk about Annie, the thoughts she was thinking” (Eggers 497). In the end, Mae has no care for Annie’s health and is more concerned with pitching an idea that could gain her more popularity at The Circle.

Instead of attempting to rekindle her relationships with her parents, Mercer and Annie, Mae puts all of her energy into her work, her social rank and most importantly her viewers. The longer Mae is at The Circle, the more numb she becomes to humanity. The narrator even explains that, “This was a new skill she’d acquired, the ability to look, to the outside world, utterly serene and even cheerful, while, in her skull, all was chaos” (Eggers 325 ). Despite the company’s dedication to all things social, Mae’s peer interactions become less meaningful as the story progresses. When Mercer commits suicide, Mae carries on like nothing happened. Mercer’s death is seen as insignificant to both Mae and The Circle because they do not view him as a contributing member of society.

Similar to how she feels about Mercer, there are many instances in which Mae’s beliefs are skewed by The Circle. The beginning of the novel shows the only clear representation of the person Mae was before becoming involved with The Circle. At this point, Mae is her own person and her mind is not controlled by outside entities. However, Mercer tells Mae that she, “willingly ties herself to leashes. And you willingly become utterly socially autistic. You no longer pick up on basic human communication clues. You’re at a table with three humans, all of whom are looking at you and trying to talk to you, and you’re staring at a screen” (Eggers 134). In the end, Mae is perfectly okay with being under constant surveillance. She is a massive supporter of the “See Change” cameras and transparency. Mae goes as far to say that, “Most people would trade everything they know, everyone they know- they’d trade it all to know they’ve been seen, and acknowledged, that they might even be remembered” (Eggers 490). By the end of the novel, Mae has surrendered herself to The Circle. In fact, Mae’s constant obsession for information is simply not enough for her and she comes to the conclusion that, “It was internal: it was subjective: it was not knowing” (Eggers 194). Mae now suffers from anxiety if she doesn’t know something. While watching Annie’s brain waves while she is in the coma, Mae actually expresses how bothered she is at not knowing what Annie is thinking. By the end of the book, The Circle succeeds at creating the new Mae, a loyal servant of their company.

Mae has become so transparent by the end of the book that there is no substance left to her. She lets The Circle isolate her from her closest relationships which makes her more malleable to the company. This causes her to become detached from her former relationships, giving her no reason to leave the campus. The Circle’s constantly new and upcoming technology gives Mae the opportunity to portray herself the way she wants to be seen by her digitized peers. Mae loses her sense of humanity and becomes the indoctrinated and disillusioned figurehead that The Circle wants her to be. With Mae on their side, The Circle has completely devoured the person she once was and with that, the circle is complete. 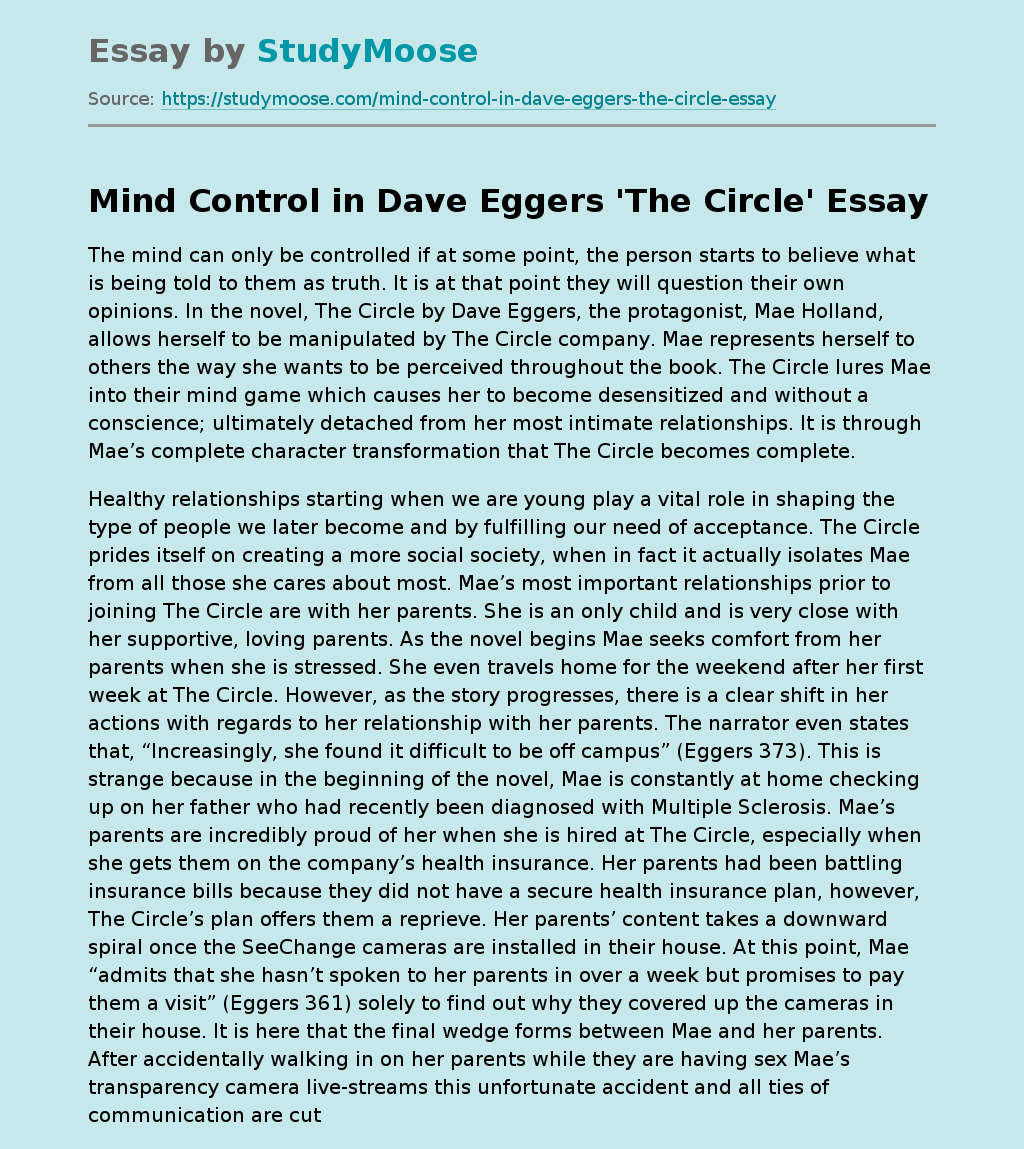