The fascinating mystery of the universe has continued to intrigue scientists and the mathematical application to the puzzle is crucial to astronomical knowledge. A series of formulas define concepts of gravity, light, stars, and cosmology, therefore it is crucial for astronomers to understand the complex mathematics of their studies. Astronomy has a long and intricate history that dates back to ancient Egypt and Mesopotamia when mathematics was first applied to astronomy as lunar calendars were created and an accurate prediction of the circumference of the Earth was proposed.

Don't use plagiarized sources. Get your custom essay on
“ Mathematical Techniques in Astronomy ”
Get custom paper
NEW! smart matching with writer

It is crucial to understand what astronomy is and why scientists study it to understand how mathematics is applied to it. Astronomy is the branch of science that deals with celestial objects, space, and the physical universe as a whole. The Big Bang Theory is a model that explains that the universe expanded from a dense, high-temperature state to a cooler less dense state and is still expanding.

Mathematics is used to define the inflationary epoch which is the interval of time less than a second after the big bang when the universe exponentially expanded its volume by a factor of at least 107. Stars are hot spheres of gas and plasma that get energy by means of nuclear fusion. A planet is described as a celestial body revolving in an elliptical orbit around a star.

Mathematics is used to describe planets and stars with calculations of the circumference, eccentricity of the celestial object’s orbit, as well as the mass and volume of a celestial object. A galaxy is a cluster of stars, cosmic dust, and gas that is held together by gravitation. There are millions of known galaxies in the universe that vary in size and shape, for example, a galaxy may have a spiral, elliptical or irregular shape and can range in sizes from dwarfed to massive. Stars in the universe do nuclear fusion which is a process by which stars convert lighter elements into heavier elements through nuclear reactions. The Heliocentric Model describes Earth’s place in the universe as a planet that revolves around one sun and has one moon that revolves around it, Earth is in a solar system with 7 other planets and Earth’s solar system is located in a spiral galaxy called the Milky Way Galaxy in the only universe known to man. The knowledge of factors of astronomy such as stars, planets, and the origin of the universe is prominent to the mathematics is applied to the topic.

The intellectuals that invented mathematical formulas revolutionized mathematical astronomy so that simply understanding an equation answers question that has been asked for thousands of years. According to Kepler’s third law, the reason that planets far from the sun have longer periods of revolution than planets closer to the sun is that the square of the orbital period of a planet is proportional to the cube of the semi-major axis of its orbit, this can be displayed in the equation P2=a3. In this equation P is the period in units of Earth’s years and a is the semi-major axis in astronomical units, this equation can only be used if the object is revolving around the sun, is in astronomical units and the units of P are in Earth’s years. An example of this is Mars’s orbit is 678 days, which converts to 1.88 of Earth’s years (687 days (1yr/ 365 days)= 1.88 yrs), so if 1.88 is substituted for P in the equation, the semi-major- axis of Mars’s orbit could be found by simplifying 1.882 to 3.5344 and identifying the cube root of that to conclude that the semi-major- axis of Mars’s orbit is 1.52 AU or 1.882yrs=1.52au. Newton’s law of gravity states that any two objects exert a gravitational force of attraction on each other, this can be explained through the equation Fg=G(m1m2/r2). In this equation, Fg is the force between the masses and is measured in units of newtons, G is the gravitational constant which is always 6.674×10−11 N · (m/kg)2 and is in units of SI, m1 is the mass of the first object, m2 is the mass of the second object and the mass is measured in units of kilograms, lastly, r is the distance between the centers of the masses and it is measured in units of meters. An example of when this equation is applied to astronomy is to calculate the force of gravity between the sun and Neptune. Neptune has a mass of1.024×1026 kg and the sun’s mass is 2×1030 kg, and the mean distance between Neptune and the sun is approximately 4.5×1012, this information can be imputed into the formula with the gravitational constant to calculate the force of gravity between the sun and Neptune to be 6.7×10^21 N. The calculation for this equation is as follows Fg = 6.674×10-11 N · (m/kg)2[(1.024×1026 kg)(2×1030 kg)/(4.5×1012)2=6.7×10^21 N.

It is important to use the right units when utilizing the equation for Newton’s law of gravity so as to calculate the proper force of gravity. Stellar parallax is the apparent shift of the position of any nearby star against the background of distant objects and it can be identified by using the formulad=1/p. In this equation, d represents the distance to the star in units of parsecs (pc), and p is the parallax angular shift in units of arcseconds.The relationship between the angular parallax and the distance is inverse, so the closer a star, the smaller its distance and the larger its angular parallax will be. An example of the stellar parallax equation is to find the parallax angle of Betelgeuse. The star Betelgeuse is 642.5 light years away from Earth, using this knowledge along with the conversion of light years to parsecs (1 pc to 3.26 ly) will result in the identification of the parallax angle. It is necessary to translate the formula from d=1/p to p=1/d so as to solve for the parallax angle rather than distance. The product after inputting the values and converting light years to parsecs in the formula is 0.0051’and the calculation is as follows p= 1/642.5ly (3.26ly/1pc)=3.26/642.5pc=(3.26/642.5)arcsec= 0.0051′.The complex principles of astronomy can be made simple through an understanding of the multitude of mathematical equations and calculations applied to astronomy.

The proper application of mathematical formulas in astronomy enables greater comprehension by scientists of the infinite outer space of the universe. The equation of Kepler’s third law (P2=a3) is used to determine a planet’s distance from the sun with knowledge of the semi-major axis and to conclude that planets that are far away from the Sun have longer periods of revolution than those close to the Sun. The equation of Newton’s laws of gravity (F= G(m1m2/ r^2)) is used to calculate the force of gravity between two celestial objects. The equation explains that the force of gravity is directly proportional to each object’s mass since both object’s masses are in the numerator of the equation. The reason that there is a lesser gravitational force when the distance between the two objects is greater is because the gravitational force and distance between the two objects squared have an inversely proportional relationship, this is displayed in the equation as the r value is the denominator. Also, since is squared it means that as distance increases the force of gravity decreases rapidly. The equation of stellar parallax (d=1/p) is the method used to estimate the distance and angle of nearby objects in space. Astronomers measure the distances to nearby stars throughout the year as Earth changed position in its orbit and as the apparent position of stars shifts in relation to its background stars. The knowledge of astronomers to properly apply mathematical formulas such as the equation of Kepler’s third law, The equation of Newton’s laws of gravity, or the stellar parallax equation permits a greater understanding of the universe.

Historical astronomical beliefs and theories enable scientists to advance their knowledge and understanding of astronomy as they can now prove ancient theories to be true and utilize them or prove why they may be wrong. Eratosthenes was a Greek mathematician of ancient times who accurately measured the circumference of the Earth using the formula 360/ (angle of the sun’s ray)= (circumference of the Earth)/(distance between two points), which is now known as the Eratosthenes method that may be used to calculate the circumference of spheres. Ptolemy was a greek-roman mathematician who proposed the geocentric theory of the universe in his work Mathematik Syntaxis, this theory explains that the Earth was the center of the universe and the sun, the moon, and the stars all revolved around the Earth, this theory was accepted for an extensive period of time. Copernicus proposed his heliocentric theory of the universe that states that the Earth revolves around the sun and is not the center of the universe, this theory has been proven to be true and has become a basis for astronomical knowledge. Galileo used a telescope for astronomical purposes and discovered 4 Jovian moons, the Moon’s craters, and the Milky Way Galaxy, this research launched the widespread use of telescopes in the scientific world and initiated the thorough research of his discoveries that has continued to the modern-day. Kepler’s laws were proposed in the sixteenth century and described the principles of planetary orbits in the solar system, these laws were further researched leading to a multitude of scientific and mathematical discoveries and theories, these laws are also a basis for astronomical knowledge.

The start of Modern Astronomy is shown when Sir Isaac Newton published his work Philosophiae Naturalis Principia Mathematica which explains the theory of universal gravitation. An Austrian physicist and mathematician, Christian Doppler, discovered the Doppler Effect which describes the motion of galaxies to be moving further from each other as they produce a redshift (or blueshift if it is moving towards) of electromagnetic light. The Doppler Effect is significant to modern cosmology as it supports the Big Bang Theory as it proved that most galaxies are moving away from each other, this means that the universe is still expanding. This vast history of astronomical theories such as the Heliocentric Theory and the Doppler Effect permits scientists to further progress their comprehension as they utilize the methods and theories that ancient astronomers and mathematicians discovered.

Progressions in the mathematics of astronomy are caused by an increased comprehension of the topic, new discoveries of mathematical formulas, application of mathematical formulas to astronomical science, and the great history of beliefs in astronomy. Understanding the meaning of astronomy enables scientists to ask abstract questions about the topic, equations relating to those abstract questions answer them if they are applied properly, and utilizing historical astronomical ideas proves to develop even more questions to be answered with mathematics. Innovations of mathematics prove to be essential to understanding the infinite space around us, so as astronomers, cosmologists, mathematicians, and other scientists in a similar field of work continue to make mathematical discoveries, human understanding of the universe will progress. 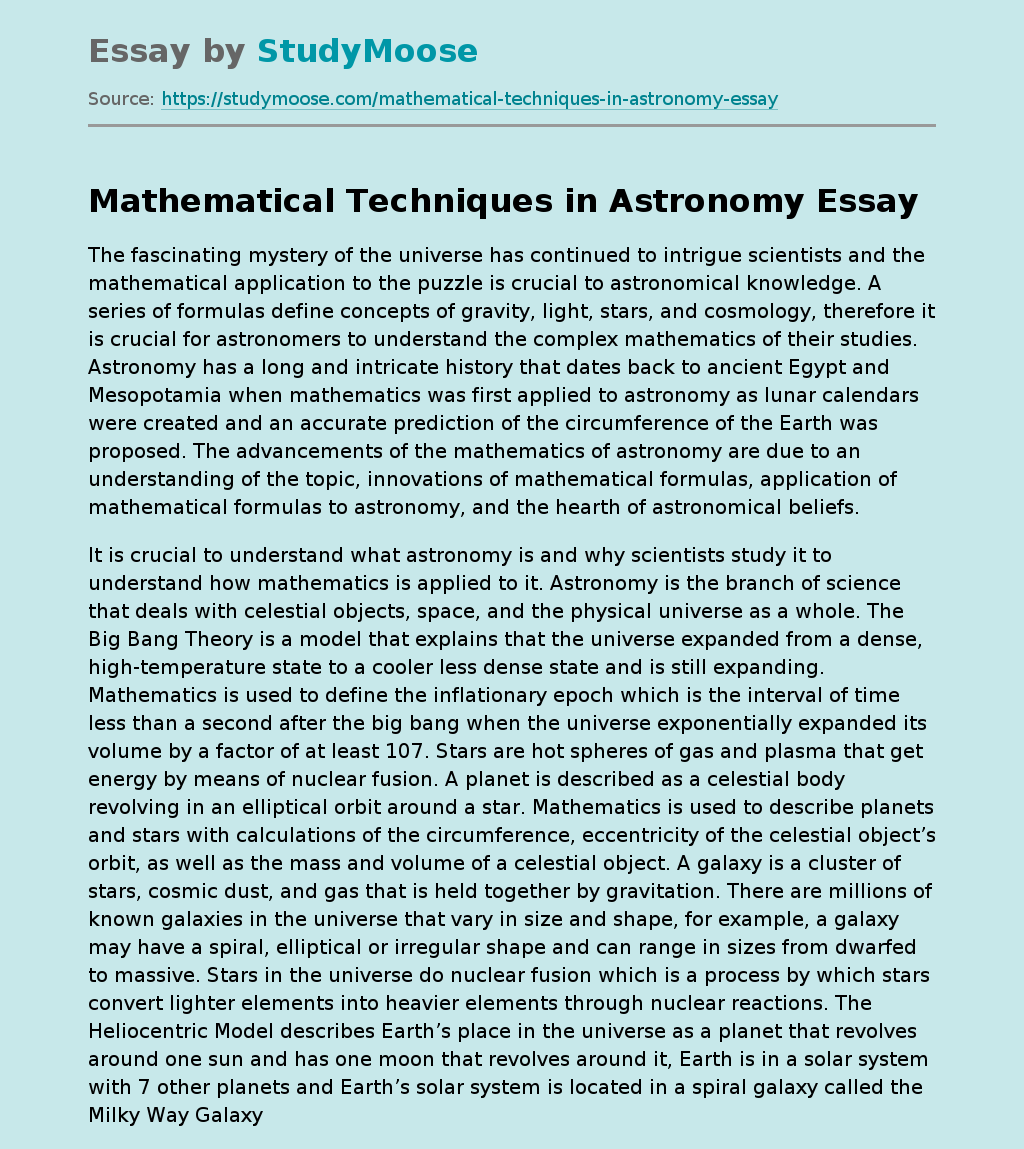