The films of Alfred Hitchcock

In 1960 Alfred Hitchcock produced and directed ‘Psycho’. An incredible film which revolutionized the industry. It practically created the horror/thriller genre and although the question still arises of whether or not you can call it a slasher movie, it most certainly inspired such productions as ‘scream’ and ‘I know what you did last summer’. Alfred Hitchcock was an inspiring director. He was an ‘auteur’, his style was very idiosyncratic and this made all his movies very appealing, one such idiosyncrasy was his tendency to create cameo roles for himself where he would have a walk on part.

Don't use plagiarized sources. Get your custom essay on
“ The films of Alfred Hitchcock ”
Get custom paper
NEW! smart matching with writer

His films were also famous for twists or ‘macguffins’ as he would call like to them, at the end of each picture. Hitchcock also uses red herrings. He would adopt conventional techniques used in film to portray a traditional story line, then suddenly end it, this would misdirect the audience to believe the film was about something it was not. Also it would deter them from guessing the end.

Alfred Hitchcock made many films including ‘North-by-North West’, ‘Vertigo’, ‘Dial m for murder’ and ‘The Birds’.

But arguably his greatest concoction and certainly most controversial motion picture would have to be the Oscar nominated ‘Psycho’. ‘Psycho’ was truly ground braking. The novel it was based on gave it all the makings to be a good film, however, it needed something new, something people hadn’t seen before, to make it a great film. All it took to do this was a slightly eccentric director, a television camera crew and just under million.

Hitchcock believed the actors to be merely tools in what was his creation.

They were the paint used to create a true masterpiece, which would be signed and taken credit for, by Mr Alfred Hitchcock. In his eyes the technology available to him was more important than the actors were. Even though each actor was chosen specifically for his or her role, after intensive screening. There are very few films in the history of the big screen that have managed to live up to the book which they originated from but ‘Psycho’ is one of them. ‘Psycho’ managed this because of the horror and suspense portrayed by Hitchcock to keep the audience on the edge of their seats, thinking about what is coming next.

The audience however are cleverly manipulated by Hitchcock, who uses the film, the red herrings, many ironic lines and the music to make the viewing public think exactly what he wants them to. He uses red herrings many times to manipulate, and basically lead the audience down the wrong path. The first example of this is at the very beginning when the camera fly’s in, and you see Marion Crane in a hotel suite having an affair with another man. This immediately makes you think the plot is based on, or will have a lot to do with her love life.

The most influential red herring

Shortly following this one is the second and the most influential red herring of all, when Marion Crane steals a large sum on money from one of her employer’s clients and heads of to phoenix to start a new life with her boyfriend, Sam. This leaves the audience under false pretences because they are tricked into believing the film is about stolen money, when in fact that has got nothing to do with the main plot, although you don’t find this out until quite a way through the film when Norman Bates, unaware of the cash, dumps all of Marion’s belongings in a swamp along with her car and the $40,000.

This is how the main red herring is manufactured: You see Marion Crane going to work, just getting on with her life as usual, further more portraying the idea of the film being based on her. While she is at work a very wealthy man named Mr Cassidy arrives to buy a house, he seems to be attempting to flirt with Marion and keeps boasting about his money. Most his comments though turn out to be very arrogant and chauvinistic. Hitchcock chooses the actor to play Mr Cassidy very well.

He’s a middle-aged man, a very stereotypical American rich guy and with the cheesy grin and strong accent he just has a sense of arrogance that makes you side with Marion, in the event which is soon to happen. Mr Cassidy takes out an extremely large wad of cash, $40,000 to be exact, (The equivalent of $400,000 today), and makes the very confident statement of “I only carry as much as I can afford to lose” Now he says this trying to impress Marion and as I will explain one of Hitchcock’s main favourite tools was irony, and that line just as many others turns about to be very ironic because he does indeed lose it, Marion steals it. 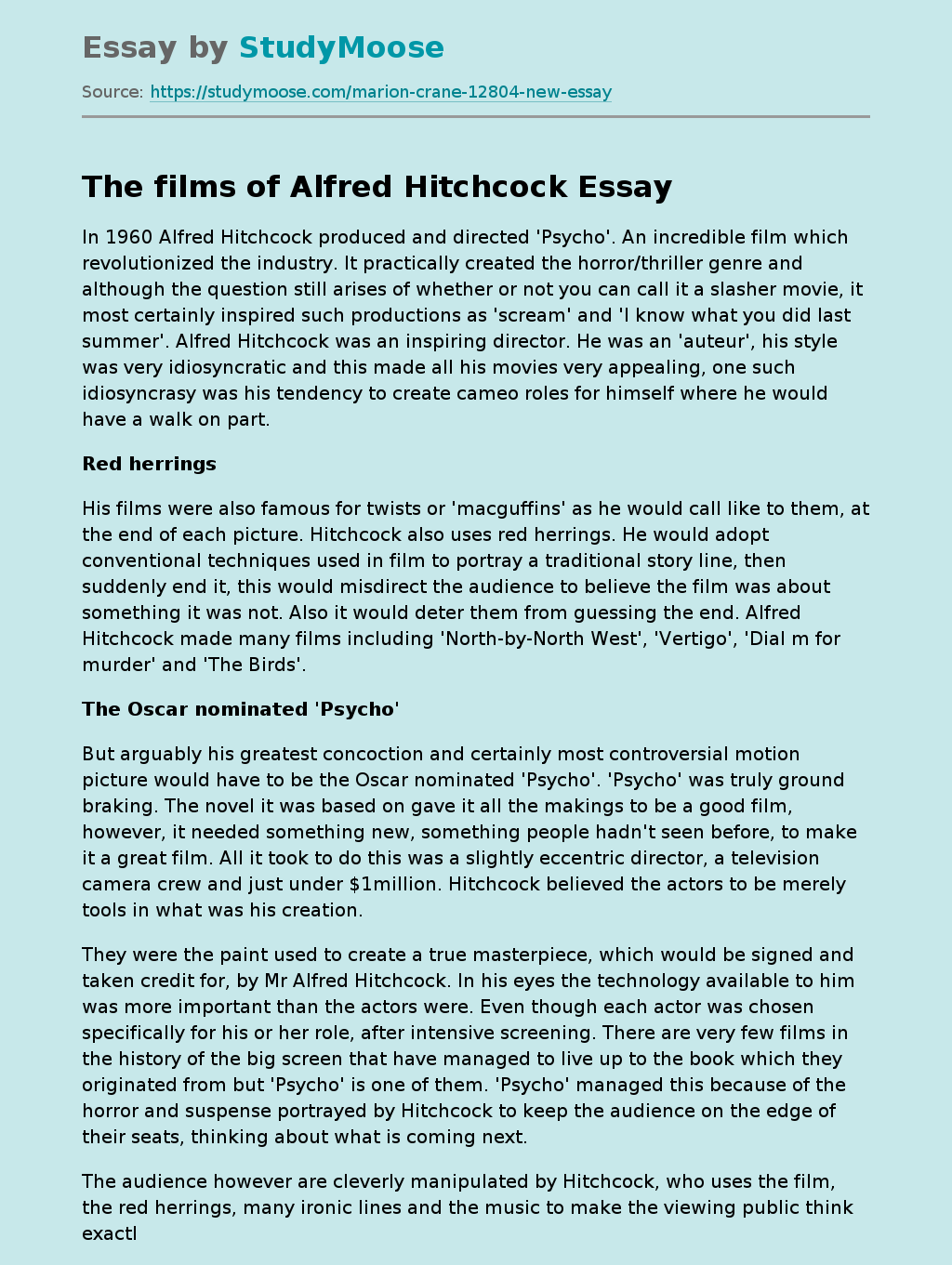