Major Differences Between Islam and Judaism

After doing some research on the religions Islam and Judaism, I’ve found many links between the two as well as many differences and similarities.

Some major similarities are: Both religions are monotheistic, meaning belief in one only true God. Both religions believe in a distinct afterlife being either good or bad depending on how a person has led their life according to their religion. Judaism and Islam both have writings with describings of how one should live as a part of either religion (Qur’an and the Torah).

Don't use plagiarized sources. Get your custom essay on
“ Major Differences Between Islam and Judaism ”
Get custom paper
NEW! smart matching with writer

There are rules regarding eating restrictions such as only being able to consume Halal (in the name of Allah) produced goods in Islam and eating Kosher meat in Judaism. Both religions have special holidays to celebrate various historical and spiritual events of their beliefs. Both religions have special headwear – a Jewish yarmulke worn by men during prayer and a hijab worn by Islamic women conforming to a standard of modesty.

Some major differences are: Judaism is over one millenium older than Islam.

Islam is a far more strict belief with many more demands and rules compared to Judaism. Judaism has a sabbath – day of rest while Islam believes that Allah – God does not need rest.

Similarities include belief in one God, preserving the faith through prophets, scriptures and observance of religious laws through expression of faith or submission. The major difference is that while Islam acknowledges that the Old Testament once was Allah’s true revelation, they believe it was altered by the Jews to reflect Jewish views and opinions.

The Jews are seen by Muslims as once having true revelation and submitting to Allah, but now being misled, unbelieving and no longer in submission.

Both Judaism and Islam have changed over time. Judaism began with Abraham essentially promising to only worship the one true God in which God pledged to uphold a special relationship with Abraham’s descendants. Over time, God introduced the law to the people of Israel of which to observe their faith in him as the one and only God, but by the time of Jesus, the law had merely become a stone cold tradition and faith of something of the past.

Islam, too, has changed over time though there are some uncertainties of the details. Islam began with Allah’s first revelation to Muhammad. It was mainly a warning to the Arabs who were practicing polygamy and worshipping false gods to turn to the one and only true Allah.

Yet, there is a strong probability that Muhammad was simply influenced by Christian and Jewish traders coming through his city. The idea is that he wasn’t thoroughly impressed by their behavior, so he sought his own version of a monotheistic religion by adding commands from Allah regarding issues in life. Later on, people realized that the Qur’an didn’t fully cover how to be a muslim in everyday life. The Hadith was created. The Hadith is a saying or a sort of guidance sought to relate to how Muhammad or his close friends would have decided on a particular issue. These have some authority within Islam today.

Believers of Judaism more or less see Islam as an attempted copy and distortion of Jewish monotheism because Islam dismisses the Jewish revelation in scripture and therefore seeks a path other than the one described in Jewish scripture. Also, Islam rejects Jews as God’s chosen people, which goes against the basic Jewish belief.

The subject at hand could be, and has been, argued for an eternity. It is clear there are vast similarities, likewise differences between Judaism and Islam. Personally, I do not believe in any religion, though they are quite interesting to study.

Major Differences Between Islam and Judaism. (2016, Nov 15). Retrieved from https://studymoose.com/major-differences-between-islam-and-judaism-essay 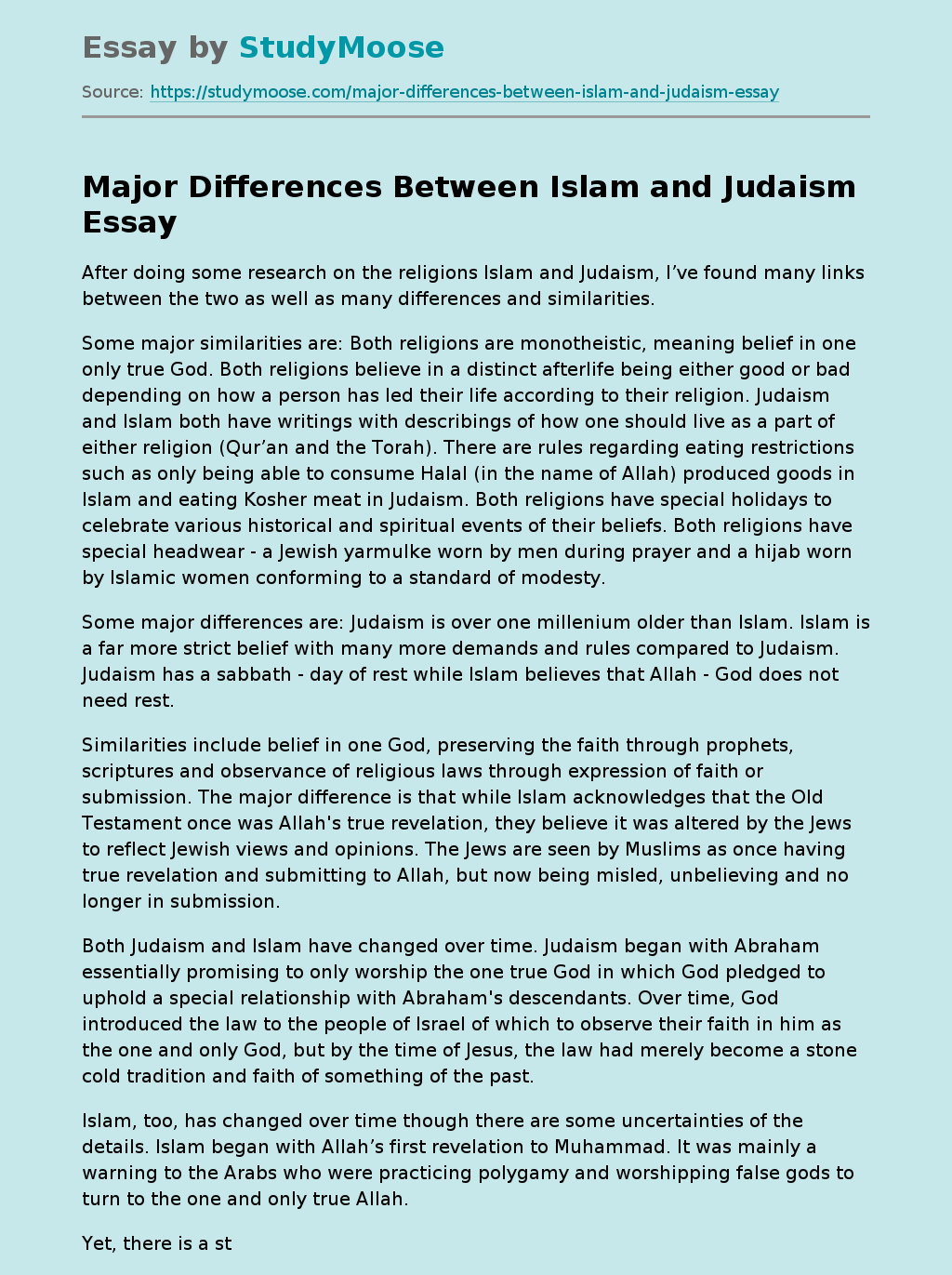