A discussion of destiny versus fate in Gustave Flaubert’s “Madame Bovary”.

Destiny: the seemingly inevitable succession of events.1 Is this definition true, or do we, as people in real life or characters in novels, control our own destiny? Gustave Flaubert’s Madame Bovary exemplifies how we hold destiny in our own hands, molding it with the actions we take and the choices we make. Flaubert uses Emma Bovary, the main character of his novel, to demonstrate this. Throughout her life, Emma makes many decisions, each one of them affecting her fate and by analyzing these decisions one could see from the beginning that Emma is destined to suffer.

However, one can also pinpoint such decisions making events as her marriage, her daughter’s birth, her adulterous relationship with Leon and her taking the poison, as times when, if she had made a different decision, her life would not have ended as tragically. When we first meet Emma, the future Madame Bovary, we perceive her as being a woman who is refined perhaps a bit more than the average peasant girl living on a farm.

We conclude this because she attended a boarding school where she was taught “dancing, geography, needlework and piano.” (p.15)

Charles, on the other hand, gives her more credit than she deserves. He regards her as well very educated, sophisticated, sensitive and loving, with the last characteristic being the one she lacks most. Soon after Emma marries Charles we see her unhappiness, and we are faced with a dilemma, why did she marry him? There are numerous possible answers to this, but the end conclusion is the same: if she had not married him it would have been better for both of them.

Emma would not have been so miserable and depressed throughout her life and Charles would have found someone who would return his love and who would appreciate him. Throughout the novel Emma never expresses her appreciation for her husband. On the contrary, she often expresses her loathing for him – “Charles never seemed so disagreeable to her, his fingers never seemed so blunt, his mind so dull of his manners so crude .” (p.161) However, Emma and Charles were married. An uneventful year passed and Emma reached yet another fork in the road of life – should she have a baby now, or wait until later? She reasoned that it would bring excitement to her life so she decided to go ahead and have the baby. She wished for a boy because he would have the freedom to “explore the whole range of the passions, go wherever he likes, overcome obstacles and savor the most exotic pleasures.” (p.76) The baby was a girl. Emma “turned her head away and fainted” (p. 77) upon hearing this news.

She felt let down by the world, as she saw her hopes and dreams shatter before her eyes. Yet again we are faced with a dilemma: why did she chose to have a baby? Was it only for selfish reasons? And yes, there are many answers, but the conclusion remains the same, if she had not had this baby girl, her destiny and that of her husband and her daughter would have been greatly altered. Emma would not have had the chance to cause so much suffering to a little girl through her thoughtless actions. Why did Emma choose to have to commit adultery and sleep with Leon when she had already experienced first hand the consequences ? This question leads to the third major event in her life, one that could have easily changed the outcome of her life if it had been approached differently.

Emma had had and affair previously that had devastated her in the end. She recovered from the pain and the emptiness she felt at the end of this affair, only to begin the cycle again with Leon. If she had taken only a few minutes of her time to analyze the situation she would have realized that an affair only brings happiness for a time and then it only brings misery. Her affair with Leon is the cause of many of her later problems, such as her debt, her sickness, her depression and her eventual death. Death. This brings us to the final fork in the road of Emma’s life. She chooses to take the Arsenic as she feels overwhelmed and sees this as the best solution for all her problems.

Why does she take the Arsenic when she is still young and still has her entire life ahead of her? One could argue that she saw no way out and she saw death as the only answer. But is this not selfish when there is a little girl that she must raise and nurture and a husband who needs her? Emma tries to hid away from her husband and make herself think that he does not love her, only to realize how deep his love really is when it is too late – “And in his eyes she saw a love such as she had never seen before.” (p.274) Considering the aforementioned reasons, one can only conclude that Emma controlled her destiny, as we all do to a great extent. There is no guiding hand that told Emma to go ahead and marry Charles, have his baby, cheat on him with Leon and then kill herself. She did all this for selfish reasons, to fulfill her own fantasies and needs. She never once stopped to think about her actions and how they would impact others. It is true, we all think about ourselves, but only to an extent.

People usually stop to think about what they will do, and they are aware of the impact their actions will have. Emma, on the other hand, not only does she not consider the consequences of her actions, but she does not learn from her mistakes either. She is an idealist who lives in the world of novels and fantasies and tries to compensate for the monotony of her life by making ‘of the wall’ decisions that only hurt her in the end. Throughout the novel Emma is faced with moments where her decision is needed, and rarely does she make the right one. Bibliography 1. Flaubert, G. Madame Bovary. Toronto: Bantam Books, 1972. 2. Guralnik, David B. Webster’s New World Dictionary of the American Language. New York: Warner Books, 1982. 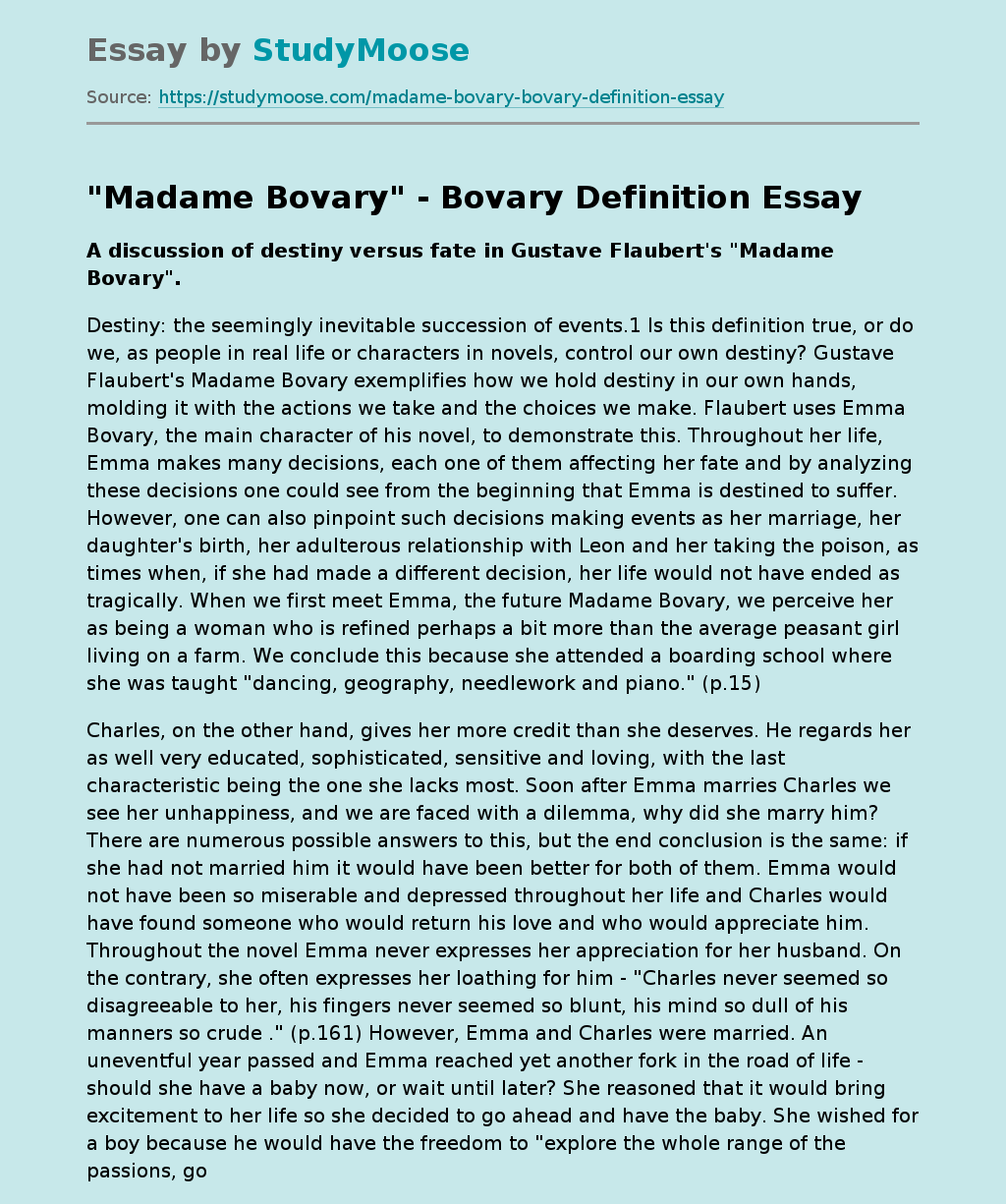