Macbeth - During Shakespeare's time, England was hysterical about witches

During Shakespeare’s time, England was hysterical about witches. There were witch-hunts and sixteen thousand women were killed because they were thought to be witches. They were burned at the stake or drowned. Shakespeare knew of this hysteria so he added them into the storyline so lots of people would be interested in the story. The story was originally written for King James 1st. It was aimed at him because of his unique fascination of the supernatural. He even wrote a book called ‘Demonology’.

Don't use plagiarized sources. Get your custom essay on
“ Macbeth – During Shakespeare’s time, England was hysterical about witches ”
Get custom paper
NEW! smart matching with writer

Witches were seen as the devil’s advocates. At the time there were apparently thousands of them around. If a woman made special herbal medicines or owned a black cat then she was seen as a witch.

In the opening scene of the play Macbeth, the witches are in a desolate place. There is thunder and lightning in the background. This makes the atmosphere seem eerie. It creates tension because there is electricity in the air. The witches are chanting in riddles ‘when shall we three meet again, in thunder, lightning or in rain?’ This makes it seem as though they can control the weather.

This is how Shakespeare grabs the audience’s attention to the play.

The witches mention their familiars ‘graymakin’ and ‘paddock’. Familiars are the witch’s companions. They are often associated with black cats, although they were sometimes made out to be mythical creatures. Familiars were said to be able to cast the witch’s spells.

The witches speak in riddles. They have a sense of telepathy around them.

Shakespeare introduces some ideas into the play by using the witches he introduces evil, ambition, nature and rhyme. They speak in riddles during the whole play ‘when the Hurley burley’s done and the battles lost and won’ the witches say this at the beginning and later on they also talk in rhyme ‘a drum a drum macbeth doth come’ this shows that they are unnatural. They chant together in rhyme going back to the earlier theory of telepathy.

‘Fair is foul and foul is fair’ this says that nothing is, as it seems. It shows that good can be bad and bad things can be good, like with macbeth, he was good at the beginning, fighting for his country but then at the end he killed lots of people because he wanted to be king. The witches are also like this; they seemed good at the beginning when for seeing Macbeth’s future but then closer to the end of the play you find out that they were just causing trouble and making hatred between people and Macbeth, their king ends up dying.

The beginning of the play makes the witches seem evil because there is thunder and lightning and they are eerily chanting together. The story of the woman and her chestnuts is another sign of their evilness, a woman has some chestnuts and the witch goes up to her and asks her if she can have one, the woman says no so the witch seeks revenge by killing her husband while he was at sea, this shows the witches are capable of doing some things that have disastrous effects. They chant together at the beginning and they also talk about things in three, this shows that they are always together in that threesome. ‘Thrice to thine and thrice to mine.’

They know Macbeth is coming so they chant about him ‘a drum a drum Macbeth doth come’ this again shows that they can see into the future. They want to harm people; they prove this by always threatening people and saying about severed body parts. Macbeth and Banquo meet the witches after winning a battle. Macbeth says ‘so foul a day I have not seen this fair’ this echoes what witches aid at the beginning of the play. He then asks the witches what they are because he is confused; when Banquo sets eyes upon them he is also confused. He does not know whether they are male or female ‘you should be women but your beards forbid me to know.’ This is what Banquo says when he sees them. This makes the witches seem deceitful because no one will ever know who or what they are.

Macbeth - During Shakespeare's time, England was hysterical about witches. (2020, Jun 02). Retrieved from https://studymoose.com/macbeth-shakespeares-time-england-hysterical-witches-new-essay 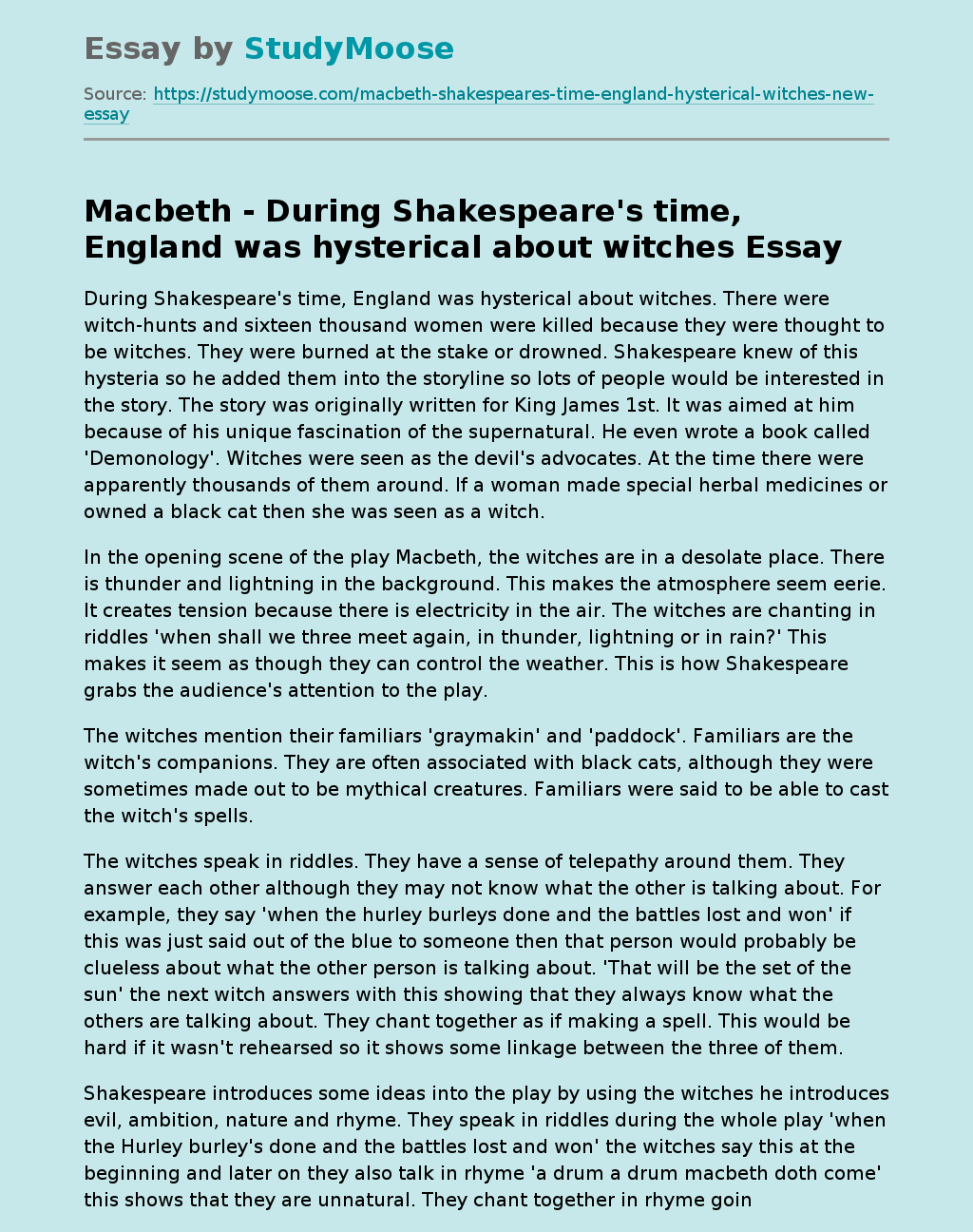