Statement of the Facts

Zehmer owned a Farm that Lucy had made several offers to purchase, all of which Zehmer rejected. Lucy met Zehmer in the latter’s restaurant one evening. After drinking, they had a substantial discussion about the sale of the farm. Lucy made an offer of $50,000. Zehmer drafted up Lucy a contract specifying the land, the amount, title satisfactory to buyer. Lucy took the written agreement and offered $50,000 to Zehmer who refused to abide to the written agreement.

Turn in your highest-quality paper
Get a qualified writer to help you with
“ Lucy v. Zehmer Case Brief ”
Get high-quality paper
NEW! AI matching with writer

Lucy filed a lawsuit against Zehmer to compel him to transfer the title of the farm to him for $50,000. Zehmer supported that the writing was prepared as a bluff, the whole matter was a joke, no binding contract was made, and at the time he made the offer he was “was as high as Georgia pine”. The trial court ruled in favor of Zehmer. Lucy appealed to the Supreme Court of Appeals of Virginia.

Does the offer made by Zehmer – supposedly as a joke – constitute a valid contract?

“The first requirement for effective offer is a serious intent.

Not determined by subjective intentions, beliefs and assumptions of the offeror. Rather it is determined by what a reasonable person in the offeree’s position would conclude that the offreror’s words and actions meant.” Offers made in jest, obvious anger, or undue excitement do not count and the acceptance of them does not create an agreement.

In his defense, Zehmer claimed that the offer to sell his farm to Lucy was made as a joke and at the time he made it they were both drinking and he was not in a state of sobriety.

The court judged Zehmer’s argument about his mental state inconsistent due to the fact he was able to provide great detail what was said and done that night in his testimony. The court found that the contract was discussed for forty minutes, rewritten to include Mrs. Zehnmer, and she did sign it. The discussion of what to be included in the sale and the provisions of it made a serious transaction. The delivery of the written contract shows a good faith offer and a good faith acceptance. 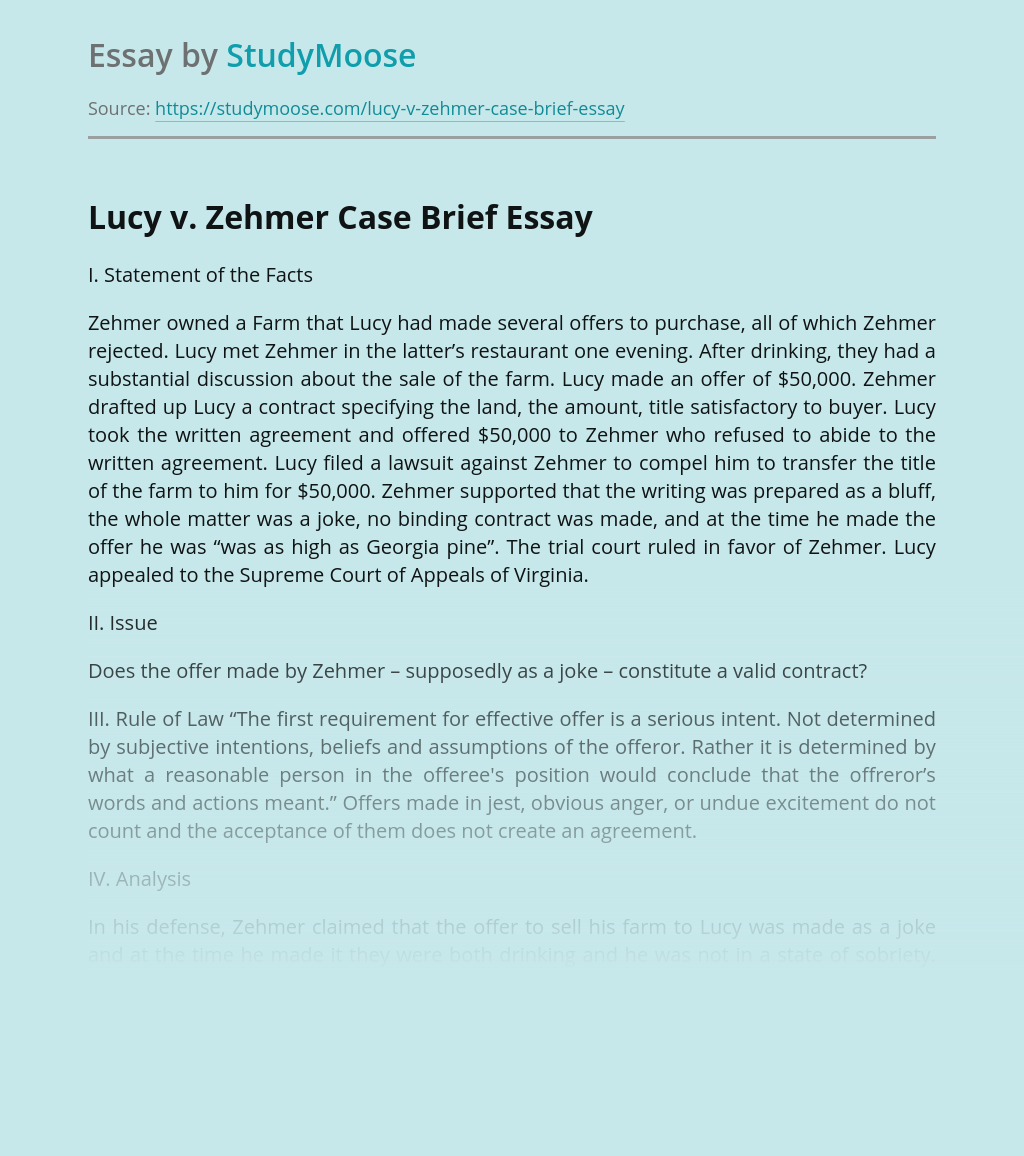 Turn in your highest-quality paper
Get a qualified writer to help you with
“ Lucy v. Zehmer Case Brief ”
Get high-quality paper
Helping students since 2015
Stay Safe, Stay Original