Looking for Alibrandi: Influence of Family

Family has a strong influence on everybody’s lives, it often affects the way everyone views themselves and how people view others. How we are raised will also affect our personalities, relationships and judgement of others. The novel Looking for Alibrandi by Melina Marchetta comprises all these factors around the characters in the story.

Everyone’s persona is based on what our family teaches us. Our persona reflects on how parents raise their children. Josie grew up fatherless which caused her sense of insecurity leaving a void that couldn’t be filled.

Don't use plagiarized sources. Get your custom essay on
“ Looking for Alibrandi: Influence of Family ”
Get custom paper
NEW! smart matching with writer

Until Michael Andretti showed up but ‘seventeen-year olds don’t need a father ‘ because Josie can’t the sudden change that was occurring in her life. Jacob grew up motherless never learning the true meaning of love and family, ‘his found his place’ in society and is content on staying that way never questioning or trying to change these boundaries however ‘if his mother was still alive he’d probably be a better person.

‘ John Barton coming from a well-known and respected family has everything people all want looks, money, name and power ‘a step in the door’ that would lead to a better future yet with all those going for him his self-esteem didn’t change.

Relationships are formed through bonding and time spent one another. Josie and her mother Christina ‘have a pretty good relationship if a bit erratic’ like teenage girls Josie is at her teenage years of rebellion which is why there are times they have disagreements and fallouts but eventually make-up since they would feel guilty with the time apart from each other.

They are able to influence each other because of this mother daughter unit, ‘I’ve spent my how life trying to impress her because I know that deep down she is the only person who loves me for who I am.’ John Barton and Josie’s relationship was based on admiration of one another because of their intellectual minds. They are attuned to each other since they share similar thoughts about society, school and individual opinion.

How everyone was viewed in the story affected the way they treated everyone. With Josie’s perception of everyone around not fitting in because of culture held her back critically. Her judgment based on people was stereo typing every person from their nationality, culture and class. That is why names such as ‘wog’, ‘ethnic’ or ‘Australian’ were often heard in conversations of the story. Or as Lee would say ‘The rich marry the rich, Josie, and the poor marry the poor. The dags marry the dags, and the wogs marry the wogs.’ Since she believes that the world around us will never change and people only associate with others like themselves.

To conclude, family plays a very hefty role in all people’s lives, they are the foundation of a person no matter how much they try to deny its ‘nailed into you so deep you can’t escape it.’ Just as Josie, Jacob and John they have all grown up in different family environment and that has all affected them differently.

Looking for Alibrandi: Influence of Family. (2016, Dec 16). Retrieved from https://studymoose.com/looking-for-alibrandi-influence-of-family-essay 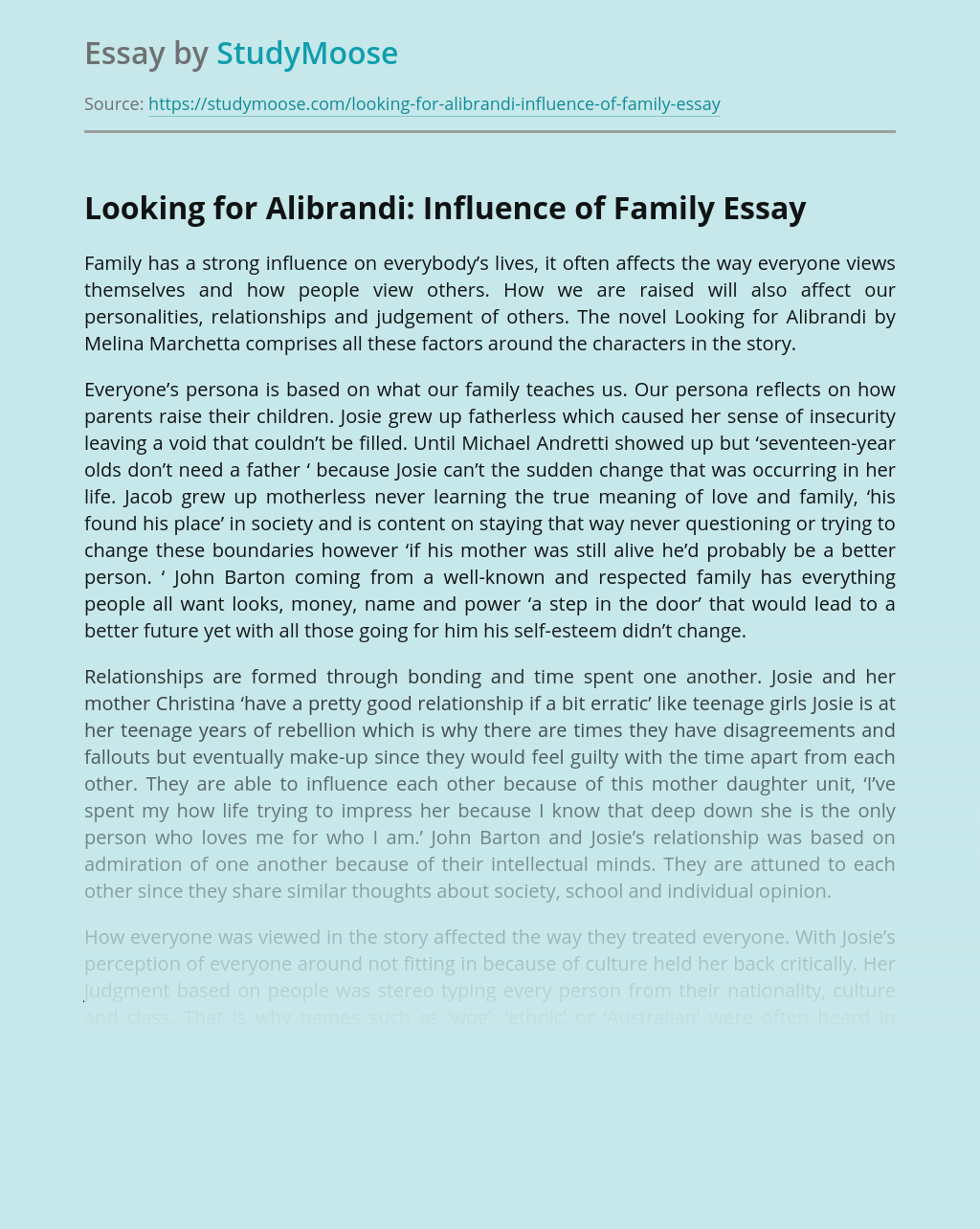