'Looking for Alaska' by John Green

‘Looking for Alaska’, John Green’s Debut novel was published in 2005.The novel is about a group of lost, but additionally very intelligent teenagers, who attend Culver Creek Boarding School for their first junior year. They are on the contrary to shallow, more or less precise opposite; Alaska Young, Miles Halter and Chip Martin’s thought are as deep as the Mariana trench. Their complicated way of looking at life, thirst for an adventure, seeking simplicity and comprehension in an intricate world will eventually end up hurting them.

Don't use plagiarized sources. Get your custom essay on
“ ‘Looking for Alaska’ by John Green ”
Get custom paper
NEW! smart matching with writer

“If people were rain, I was drizzle and she was a hurricane” was Miles imagery of Alaska after her tragic death. Even though the novel is written via Miles perspective the entire structure of the story revolves around Alaska’s death. This is from one hundred and thirty six days before, where we see Miles as a dull, anti-social geek; to one hundred and thirty six days after where we see Miles as ‘Pudge’, a well developed man with friends, who smoked cigarettes and drank wine.

Proficient in: Looking For Alaska

Even before the actual death occurs, death is a recurring theme, from Alaska’s mother’s death to Miles trying to find out what happens to oneself upon dying. Miles is obsessed with peoples last words; dying words. The very actual thought of last words completely fascinates him.

It makes the characters rediscover so much more about about themselves. We become acquainted with the characters through their actions and conversations. Alaska Young behaves in a most reckless manner.is such an interesting, beautiful, enigmatic individual, nevertheless so self-destructive. Just two days before she is gone forever, the boys learn that they hardly knew the girl they love so fervently (during ‘Barn Night’). January 9th, 1997 was the turning point in Alaska’s life. She was barley eight years old but witnessed her mother’s death, sitting by her side and watching the life draining out of her. Alaska never called the ambulance or made an attempt to save her mother. This had ruined her. Eight year old Alaska drowned herself in guilt. Her extreme unpredictalbililty and spontaneity was most likely an effect of ‘ failing her mother’. She had her moment and didn’t take it.

This effected the way she handled spontaneous situations in the future. Alaska would never think twice about her actions or reflect the possible consequences. This eventually gets her killed. In the final religion exam, the students have to pick what they think is the most important question human beings must answer, and examine how Buddhism, Islam and Christianity (three world religions) attempt to answer it. Miles chooses to examine the question ‘What will happen to us when we die?’. Miles will never find the answer until he experiences it, but chooses to settle with a fact from science class; energy is never created and never destroyed. In religion the soul flies to heaven and peoples beliefs give them answers to everything. Alaska on the other hand isn’t a believer; the question related to her mother’s death drives her crazy. Among a variety of metaphors, the imagery of the labyrinth is a main throughout the novel. “How will I ever get out of the labyrinth of suffering?”.

There are many instances where Miles tries to figure out how Alaska’s death occurred, why it happened, what really are about, and Alaska Young’s last words. Death plays an important part in life, although many people fail to see it. It is a subject most people avoid talking about, as the thought itself scares them, but it is important to face death and be aware that it can touch anyone in anyway close to you. The book uses death as an aspect to show the readers that death is something inevitable, but we can never become ready for it.

'Looking for Alaska' by John Green. (2016, May 27). Retrieved from https://studymoose.com/looking-for-alaska-by-john-green-essay 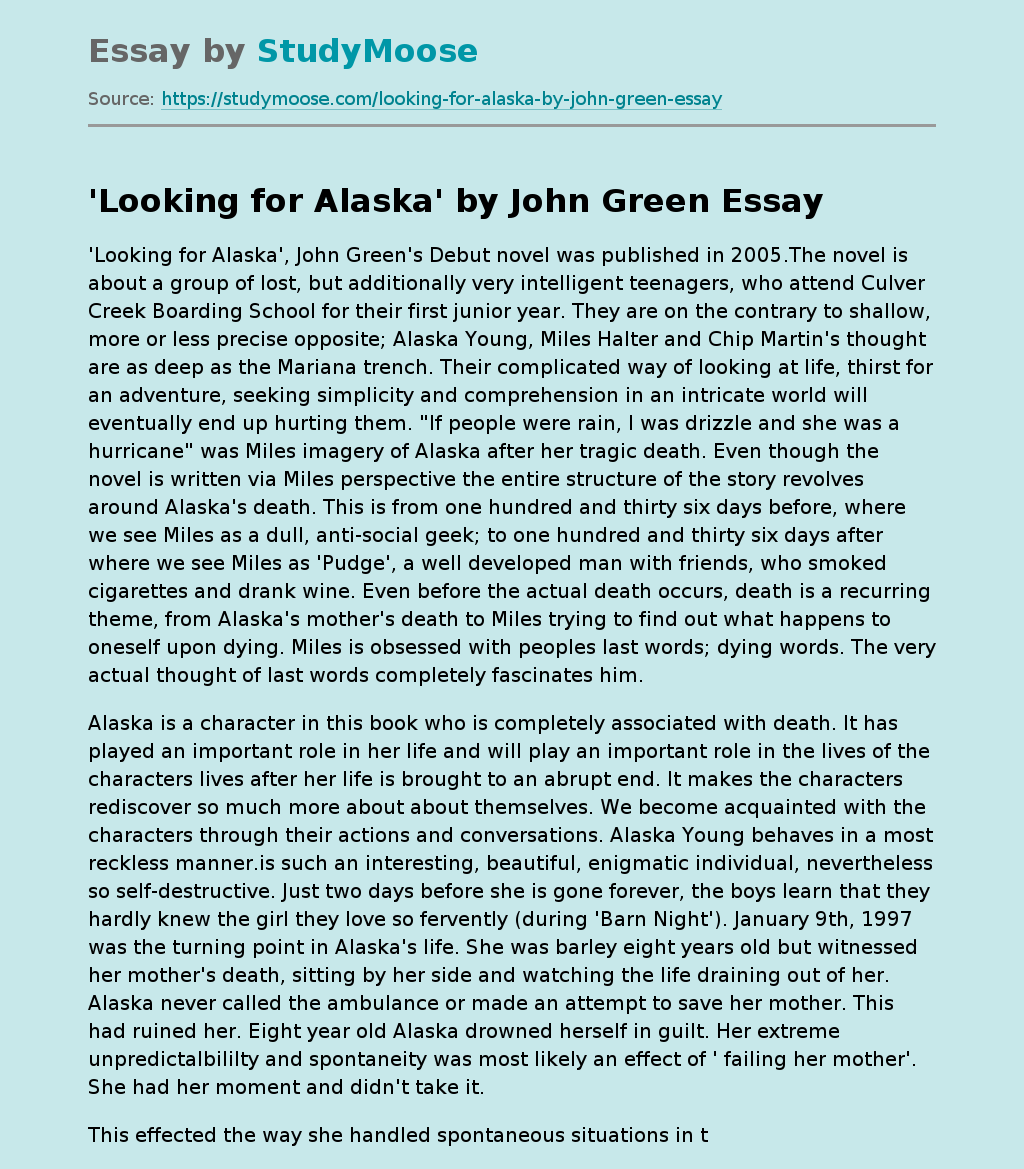