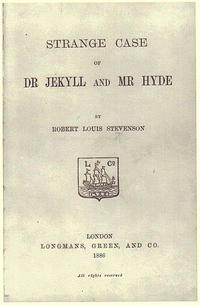 Gabriel John Utterson is a fictional legal practitioner who finds himself in the middle of repeated strange situations that involve his client and friend, Dr. Henry Jekyll, and a hardened criminal named Edward Hyde. He takes a closer look at the series of events and discovers his friend Dr. Jekyll and Mr. Hyde is indeed one person with two alter egos.

The book greatly influenced literature for over a hundred years and is considered one of the most popular pieces of English literature. It has been adapted into 19 films and dozens of stage, radio, and television plays. Dr. Jekyll and Mr. Hyde have also been adapted into 4 video games.

It begins with a gruesome case of assault by a murderous criminal – Mr. Hyde, who is later forced to pay his victim’s relatives with a cheque signed by a kind and intelligent scientist, Dr. Jekyll.

The Dr eventually approaches his close friend and well-respected lawyer in London named Mr. Gabriel Utterson to have his will written to transfer all he owns to Mr. Hyde. Bewildered, Mr. Utterson decides to stake out Mr. Hyde, eventually talking with him, and Mr. Hyde gives the lawyer his address which turns out to be the same address as Dr. Jekyll.

The lawyer speaks with his friend, who tells him not to concern himself with the affairs of Mr. Hyde. A year later, Mr. Hyde kills Sir Danvers Carew, beating him to death. The disturbed lawyer decides to speak with a mutual friend of his and Dr. Jekyll, who was instrumental in discovering that Dr. Jekyll was indeed Mr. Hyde.

The following are the characters in Dr. Jekyll and Mr. Hyde:

The book involves a lot of conversations and self-reflection. We have a list of top quotes below:

This formal piece of writing indicates the writer’s perspective on a subject. Essay writing is quite easy for some, while most students find it hard to go about it. Successful essay writing requires great writing skills, knowledge, and planning. Following some writing process steps is important to have a compelling write-up.

This is the leading paragraph to introduce the subject to the reader. It explains how you understand and interpret the novel and describes your approach to dealing with it.

Body of the Essay

The body paragraphs are where you express your ideas. Essay writing is generally a blend of researched evidence and different resources.

Begin with your Dr. Jekyll And Mr. Hyde essay’s most vital points. Your body paragraph is the most critical aspect of your essay; that is why it is essential to express them in plain and straight language.

This is the last and ending paragraph and requires much attention because it can easily influence your essay. It should be written as a second introduction that can be read independently with adequate understanding. Reintroduce the thesis and morals. Finally, include a call to action for your readers.

Tips to Consider While Writing An essay about ‘Dr. Jekyll And Mr. Hyde

Students are tasked with essay writing throughout their academic year, either as a class assignment or as part of college admission requirements. The following are factors to consider while writing an essay about Dr. Jekyll and Mr. Hyde.

This is the Initial stage of writing paperwork. You must have complete knowledge of the person of Dr. Jekyll and Mr. Hyde as well as other characters to write a great essay.

The most common reasons for failure in essay writing are lack of understanding and poor background research. Do not limit your knowledge to what you read in summaries. Read the book thoroughly, either in pdf format or hardcopy.

The book’s themes, plot, and characters are all useful when creating a compelling topic. Many titles can be generated from the title of the book, characters, or conversations, and a deep understanding of the book surely helps. Choose a topic that best describes your argument, and it must give the reader an idea of what your work entails.

For a better understanding, thesis statements are words that express the main idea of an essay writing. It reflects an opinion or judgment that you’ve made about the novel. It shows what your paper will be about and help you keep it to a reasonable topic.

Include a Lesson or Moral

Include a moral or lesson towards the end of your writing. These are what you want your readers to take with them when they read your paperwork. This will enable your readers to sync with your argument. At this point, you add what Dr. Jekyll And Mr. Hyde teach us. This is also a way to convince your readers that as you write to fulfill your academic obligations, you also learn from it.

Conclusion: Go Through Your Essay

After you finish your essay with a great concluding paragraph that leaves the reader with a strong impression, go through the essay to ensure no mistakes such as typos, grammatical, or lexical errors are made. If there are any, you correct the errors. You can also give your essay to proofread it.

Are you finding it hard to write your ‘Dr? Jekyll And Mr. Hyde’s essay? Or are you doubting your writing skills? No worries, we’ve got you covered. Our team of expert writers is here for you to deliver the best at a reasonable price.

Is Dr. Jekyll or Mr. Hyde the Evil One?

Mr. Hyde is the evil and repugnant one. He is the darker side of Dr. Jekyll and is the one that seeks to satisfy the evil imaginations of the good alter ego. Dr. Jekyll is an intelligent and kind scientist that is well respected.

What mental illness do Jekyll and Hyde have?

The person of Dr. Jekyll and Mr. Hyde is a case of two very different personalities in one person, also known as split personality. Medically, it is a dissociative identity disorder and involves at least two personalities seeking control of a person’s consciousness.

What is the story of Dr. Jekyll and Mr. Hyde about?

Dr. Jekyll is a brilliant and respected scientist who meddles with the dark side of science to create a potent potion that can unleash his ugly and brutal side, Mr. Hyde. Whenever Dr. Jekyll uses the potion, Mr. Hyde is released for some time.

Is Jekyll and Hyde Based on a true story?

Yes, the story of Jekyll and Hyde is inspired by the story of 18th-century Scottish Deacon William Brodie, a respectable cabinet maker by day and a seasoned thief at night. Robert Louis Stevenson had earlier written an unsuccessful play about Deacon before he eventually wrote Jekyll and Hyde.

Save Time On Research and Writing
Hire a Pro to Write You a 100% Plagiarism-Free Paper.
Get My Paper
We've found 13 essay samples about Dr Jekyll And Mr Hyde
Prev
1 of 1
Next
Other books by the author
Treasure Island
Similar genre
Apocalyptic And Post-Apocalyptic FictionAutobiographyTragedyVampire FictionCrime FictionDomestic FictionMusicalPersonal NarrativePost-ApocalypticFantasy
Get to Know The Price Estimate For Your Paper
Topic
Number of pages
Email Invalid email

Why Their Story Doesn’t Matter In Praise of Stevenson’s Writing
...This piece of literature can be admired for its superb mingling of different literary devices to deliver their intended effect by stuffing a complete story in its scant number of pages by using a brilliant combination of point-of-view changes, dialog...
What Exactly Happened in This Book
...The resolution is when the letter explaining Dr. Jekyll’s split personality and the plan to separate the two got out. Utterson read it and realized why Jekyll turned himself into Hyde. Utterson finally solved the mystery between Jekyll and Hyde. Dr...
Still don't know where to start with your assignment?
Hire a subject expert to help you
Hire Writer
Live chat  with support 24/7
Don’t waste Your Time Searching For a Sample
Get Your Job Done
By a Professional Skilled Expert
HIRE Writer