Essays on The Adventures of Huckleberry Finn 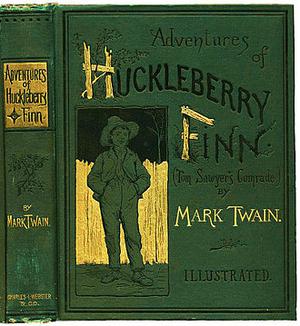 The Adventures of Huckleberry Finn, as known in most recent editions, is a book by American author Mark Twain. It was first published in the United Kingdom in December 1884 and in the United States in February 1885.

The book tells the story of Huckleberry Finn’s escape from his alcoholic and abusive father and Huck’s adventurous journey down the Mississippi River together with the runaway slave Jim. It is a direct sequel to The Adventures of Tom Sawyer. The book is told from the point of view of Huck Finn, a barely literate teen who fakes his death to escape his abusive, drunken father.

Huckleberry Finn has come into a considerable sum of money following The Adventures of Tom Sawyer and is placed under the strict guardianship of the Widow Douglas and her sister, Miss Watson. The women attempt to civilize him, but Huck prefers to have adventures with his friend Tom Sawyer. His father, Pap, an abusive alcoholic, returns to town and tries to appropriate his fortune. When this fails, Pap kidnaps Huck and confines him in a cabin in the woods.

Huck elaborately fakes his murder and sets off downriver to escape his father. He settles on Jackson’s Island, where he reunites with Miss Watson’s slave Jim, who ran away after overhearing what she was planning to sell him. He decides to go downriver with Jim to Cairo, in the free state of Illinois. After heavy flooding, the two find a timber raft and an entire house floating down the river. Inside, Jim finds a body that has been shot to death but prevents Huck from seeing the corpse.

● Huckleberry Finn, Huck to his friends, has been brought up by his father, the town drunk, and has difficulty fitting into society. Huck’s good nature contrasts the inadequacies and inequalities in society.

● Tom Sawyer is Huck’s best friend; he is the leader of the town boys in adventures. He is mischievous and the smartest kid in town.

● Jim is Miss Watson’s physically large but mild-mannered slave. His frequent acts of selflessness and his friendship with Huck and Tom demonstrate that humanity has nothing to do with race.

● Pap Finn is Huck’s father, a brutal alcoholic drifter. He resents Huck getting any kind of education. He is only interested in his son to feed his alcohol addiction.

● Aunty Polly is the aunt and sole guardian of Tom Sawyer; she resolves the conflict in the story.

● “That is just the way with some people. They get down on a thing when they know nothing about it.”

● “Human beings can be awful cruel to one another.”

● “Stars and shadows aren’t good to see by.”

● “What’s the use you learning to do right when it’s troublesome to do right and aren’t no trouble to do wrong, and the wages are just the same?”

● “I don’t want no better book than what your face is.”

An essay’s introduction typically presents your topic or thesis statement, highlighting what you go in-depth on throughout the rest of the essay on Huck Finn. This is also where you state your thesis.

Your thesis is the most important part of your essay because it’s the point you are making. It needs to take a clear stance and shouldn’t include hedging language that undermines that stance like “seems to” or “possibly could. Introductions can give a general background to your topic, knowing you explore it further in each section of the body.

Consider writing an intriguing introduction that captures your reader’s attention and gets them to keep reading.

A body is the part of an essay where you elaborate on your analysis and arguments, often presenting information, research and evidence to support your claims. It can include quotations to reference other material or supporting evidence in this section of your essay.

Use the body to organize your core debates and interpretations and consider making one main point per paragraph. If you are unsure whether you should include a specific point or detail in your body paragraphs, refer to your thesis statement. Your thesis statement is the core of your basic essay structure, so everything else in the essay needs to relate to it in some way.

A conclusion is the end of an essay, where you summarize your ideas presented. Your conclusion usually brings together the major points of your essay, showing how they relate.

Because your reader is now familiar with your thesis, the summary in your conclusion paragraph can be more direct and conclusive than the one in your introduction paragraph. A conclusion also often showcases the value behind your argument, interpretation, or research.

Tips To Consider When Writing an Essay on Huck Finn

If you have not read the book yet, it is recommended to do this. Without reading the novel, you won’t know all the plot twists and the different characters’ motivations. Don’t just read the book; know about it too. You should do the required reading and have your perspective on the book’s characters, themes, and plot in mind.

Also, you won’t experience the individual storytelling style of the author. The Adventures of Huckleberry Finn is a novel of its time. Twain does a good job of exploring the themes of racism and identity. It is a satirical look at the 19th-century social climate. I think it’s worth a read if it’s only to get a glimpse of a past that no longer exists.

It’s advisable to focus on a particular question related to the novel if you want your paper to be unique and interesting. Sometimes, you will already have an assigned essay type or topic, saving you one step. If these were not assigned to you, you have to think of possible topics that you can write on. The topic and first sentence of the introduction should pique your reader’s interest and curiosity.

This sentence is sometimes called the hook. It might be an intriguing question, a surprising fact, or a bold statement emphasizing the topic’s relevance. For example, you may discuss the role of lies in the novel. Is there a difference between “good” and “bad” lies?

Huckleberry Finn presents two main visions of freedom in exploring questions about the meaning of liberty and at what price a person is truly free. Don’t provide too much detail in the introduction—you can elaborate in the body of your essay.

Before you start writing, you should plan what to include in each of the three main sections of your paper. An outline is often used to demonstrate the content of most five-paragraph essays. But really, an outline can help you organize your thoughts before you start writing and save you time since you’ll avoid beating around the bush or jumping from one idea to another without a clear direction.

It’s important to give context that will help your reader understand your argument. This might involve providing background information, giving an overview of important academic work or debates on the topic, and explaining difficult terms; having crafted a good outline in advance, you’re likely to compose much better and reader-friendly work.

Rather than writing your essay like a puzzle, keeping the reader in suspense about what conclusion you’ll reach by the end, use the thesis statement like a treasure map to give the reader a sense of your essay’s direction. Tell them the conclusion up front so they know where your piece is headed. Above all, make it an argument, something that could be true or false and that you are saying is true.

Include a Moral Lesson

You should be able to make the readers get some lessons at the end of your essay. So if the point of your narrative is to impart a moral lesson, it’s important to discuss moral clarity. You have to make your readers sync with your argument. At one point, Huck teaches us about integrity and loyalty.

Conclusion: go through your essay

After you are done with your essay with a great conclusion that is finished with a memorable or impactful sentence that leaves the reader with a strong final impression, it is essential that you go through the essay to ensure no mistakes are done, and no typos. If there are any, you correct the errors. So make sure you read again to be in a safe spot.

Need unique essays on Huck Finn? Our expert writers are here for you to deliver the best at affordable rates.

What is the main message of Huck Finn?

The main characters in The Adventures of Huckleberry Finn provide an insight into the apparent foolishness of society. The book presents two main visions of freedom in exploring questions about the meaning of liberty and at what price a person is truly free. Huck and Jim seek freedom, though they have different ideas about freedom.

What lessons does Huck Finn teach?

● Being a part of this world requires some lying skills.

● Having a get-away place is a good thing.

● People may refuse to take responsibility for their actions.

● Doing what you feel in your gut is right – is the most important test you’ll have to take.

● Strive to be more than average and truly live the life you’ve been given.

● You’ll have to live with your conscience, no matter what you do.

● Life gives us a hard time, but it’s a good thing.

How would you describe Huckleberry Finn?

Huckleberry Finn is an uneducated, superstitious boy, the son of the town drunkard. Although he sometimes is deceived by tall tales, Huck is a shrewd judge of character; he can be described as literal, down-to-earth, vigilant, and humorous. He is also described as non-judgmental, adaptable, cunning, logical, and playful.

Save Time On Research and Writing
Hire a Pro to Write You a 100% Plagiarism-Free Paper.
Get My Paper
We've found 78 essay samples about The Adventures of Huckleberry Finn
Prev
1 of 2Next
Other books by the author
A Connecticut Yankee in King Arthur's CourtHuck FinnLife on the MississippiTom sawyer
Similar genre
Literary CriticismVictorian LiteratureSpiritualChivalric RomanceShort StoryDark ComedyPoliticsChildren'S BookTragicomedyHeroic Epic
Get to Know The Price Estimate For Your Paper
Topic
Number of pages
Email Invalid email

FAQ about The Adventures of Huckleberry Finn

Why Huckleberry Finn Is My Favourite Character?
...Finishing chapter 17 Huck is beginning to realize that life isn't just about smoking, fishing, and doing as he wishes. Huck matures and Huck makes the decision to go free Jim because he believed it was the right thing to do. Huck also helped another ...
How does Twain deal with the issue of Jim’s freedom?
...In some respects he writes as if Jim shouldn't be free and is a piece of property, but all the time develops him and turns him into the kind of character that is often seen as a hero in literature... his use of irony to constantly confuses the reader...
Still don't know where to start with your assignment?
Hire a subject expert to help you
Hire Writer
Studymoose.com uses cookies. By continuing you agree to our cookie policy
Live chat  with support 24/7
Don’t waste Your Time Searching For a Sample
Get Your Job Done
By a Professional Skilled Expert
HIRE Writer