Literary elements in the bluest eye

In 1970, Toni Morrison published an intense novel, The Bluest Eye, to show the world the effects that internal racism had on African American families during the 1940s. The novel begins during the month of autumn, a time of confusion, contempt, and corruption in the life of the young narrator, Claudia. In the course of this portion of the story, Morrison eloquently portrays the potential effectiveness of literature through her master use of literary elements. Setting, mood, tone, and imagery are among the most prominent elements used to convey the harshness of the character’s lives in this rather contentious plot.

During the course of autumn, Morrison takes the reader through the numerous settings in the lives of the novel’s characters, including the McTeer home, the Breedlove Apartment, and the whorehouse directly above the apartment. All of which are located in Lorain, Ohio. The McTeer house, home to Mr. and Mrs. McTeer, Claudia, Frieda, and, for some time, Pecola, is conveyed to be a somewhat adequate living space for the family; however, it is by no means comfortable.

Claudia describes the space as being old, cold, green, peopled by roaches and mice; yet, this dwelling was a white man’s mansion compared to the retched condition of the Breedlove apartment. Hidden in the frame of an abandoned store, resided the equally abandoned bodies of Pecola, Pauline, and Cholly Breedlove. The building was a mirror of the very lives of its occupants; both were virtually invisible to the outside world, bland in adornment, and scarred by the effects of their pasts.

Seemingly out of place, directly above the Breedlove apartment lies the livelier home of the neighborhood whores, China, Poland, and Mrs. Marie. This location was Pecola’s escape, the one place she could forget her life in the apartment and enjoy the companionship of people who cared about her. The settings of the characters as described in the beginning of Morrison’s novel are essential to understanding their fundamental nature as human beings.

In addition to the severe descriptions of her novel’s setting, Morrison reveals the character’s innermost beings with an evident mood of embitterment within the first portion of, The Bluest Eye. It is a mood most powerfully conveyed through Pecola’s utter contempt toward the white race. It first made apparent to the reader when Pecola arrives to the McTeer home and drinks milk from the Shirley Temple cup. Drinking all three quarts of the family’s supply of milk, Pecola cannot seem to get enough of to drink.

Or, is it that she continues to drink the white goodness in hopes of changing her chocolate skin into the beautiful fair complexion of the young child star featured on the cup? Claudia reveals her resentment toward little Temple when she sneeringly drifts into jealous thoughts about the golden-locked girl dancing with her dearest Bojangles. The reader encounters this same attitude in Claudia as she dismembers a toy doll in an effort to figure out what the blue-eyed beauty attained that made it so loveable.

During autumn, Morrison portrays a corrupting mood of pure bitterness toward the white population through the attitudes of the novel’s characters. Along with a revelation of the characters’ dispositions through the setting and mood of her novel, Toni Morrison enables the reader to gain a better grasp on the true meaning of her work by the colloquial and cynical tone of the plot. Morrison often uses vernacular that is common to the characters in the novel, so that the reader can relate to the novel’s situations on a more personal level, which gives the story an idiomatic tone.

The novel reflects a cynical tone by the way that the characters, most especially the Breedloves, adopt the world’s opinion of their inherent ugliness onto themselves. When Pecola looks at herself in the mirror, she can see her dark deep-set eyes and bushy eyebrows; yet, she fails to notice her high cheekbones and voluptuous lips. Marked by this cynical assumption, the characters lives are eternally condemned to carry the burdens of a self-imposed conjecture.

Morrison gives the plot a colloquial and cynical tone, with the intention of conveying the true essence of the novel. Imagery is another enlightening literary device implemented by Morrison. Claudia’s puking incident in the opening of the novel is the first crude picture the reader is given of the realities of the McTeer’s lives. Though it is quite the gruesome portrait, Morrison successfully gets the message of the family’s harsh situation across early in the novel. Imagery can also be found in the repetitive descriptions of the blonde haired, blue-eyed white population.

Morrison’s exaggerated reflections of Pecola’s appearance shows the reader that the characters were so consumed with their lack of self-worth that they are blinded from the truth. The use of imagery in the novel shows the extent to which the African American race suffers with internal racism during the course of autumn. The Bluest Eye draws a horrific, yet realistic picture of the mark that internal racism left on America in the 1940s. Morrison effectively portrays this portrait by the use of various literary elements. The most frequently and prominently used in her novel are setting, mood, tone, and imagery.

Literary elements in the bluest eye. (2017, Aug 15). Retrieved from http://studymoose.com/literary-elements-in-the-bluest-eye-essay 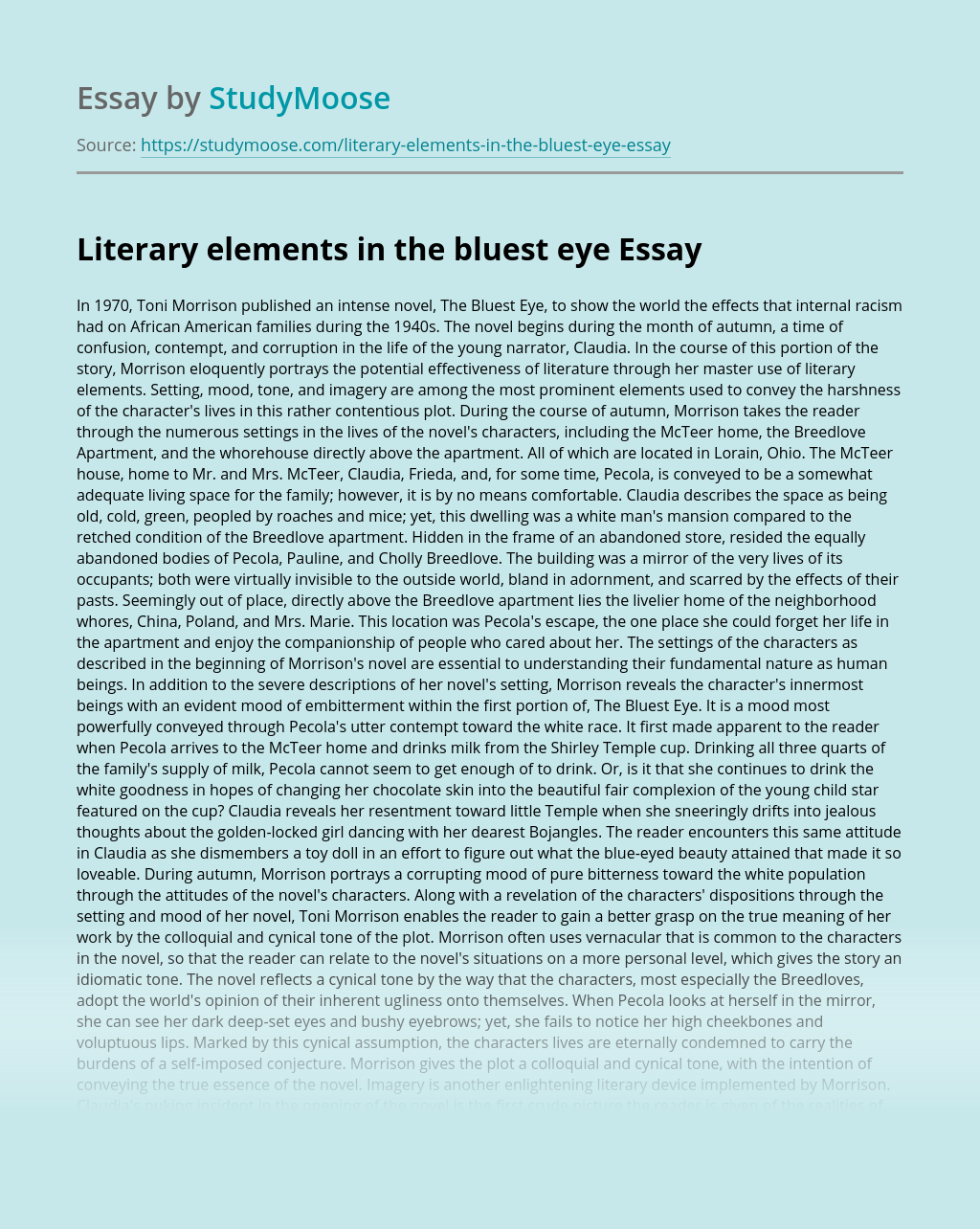 Don’t waste time
Get a verified writer to help you with Literary elements in the bluest eye
Hire verified writer
$35.80 for a 2-page paper
Stay Safe, Stay Original