Child abuse has been a common occurrence throughout the times of this world. In the story Barn Burning that was written by the author William Faulkner, a story is told of a boy named Colonel Sartoris Snopes who lives with his family. His father is a man who has seen the brutality of war and has a very cold heart. His name is Abner Snopes. His heart is so cold that it is almost as if he is not even human.

Don't use plagiarized sources. Get your custom essay on
“ Literary Analysis of Barn Burning ”
Get custom paper
NEW! smart matching with writer

William Faulkner in the story uses words comparing Abner Snopes to a house fly, or stinging wasp and also says that he lifts his hand like a curled claw.

This suggests that the Author was trying to give the readers an image of Abner Snopes being someone who lacked human qualities. Mainly he lacked qualities such as compassion and understanding. Abner Snopes outer appearance completely reflects his inner emotions. His leg being shot in the war as he was attempting to steal confederate horses from for his very own self profit, drags behind him everywhere he goes.

This image fits well with the strange ideology of family values he has, as well as the inner corruption and love of revenge that this character embodies.

He compensates for these lack of human qualities by ruling over his family with an iron fist, and bring violence to anyone who he believes that has done wrong towards him. In the beginning of the story Sartoris and Abner Snopes are in a court room being accused of burning down another man’s barn.

A man is sent to Mr. Harris’s with the money to buy back the hog but as a leaving message the man forewarns Mr. Harris that wood and hay are combustible. The judge decides that that alone is not enough to be used as proof so the case is dismissed. However, the judge lets Abner Snopes know that he wants him out of the county for good. Throughout the story it is obvious the Sartoris’s father is trying to influence him by teaching him how to be corrupt and embrace revenge trying to fool him with words such as “being loyal to your family before anything else. ” (Faulkner) Colonel Sartoris Snopes is quite different from his father.

Although his father attempts infusing him with potentially corruptive influence Sartoris has a sense of justice. His father tries to manipulate him by continuously explaining to him the importance of family loyalty, yet Sartoris’s conscious doesn’t agree with everything his father has to do or say. Sartoris’s worldview and morality was for more mature than that of his brothers’ who lacks the will power to stand up to his father. Eventually the family arrives to their new home. Destiny plays out and eventually Abner Snopes gets into his another argument and confrontation has begun.

Abner snopes ruins a rug with manure and is told to clean it. He tries but the rug is ruined beyond repair so he is ordered to make a payment. He refuses, so once again they find themselves in court and he is than forced to pay for it. Frustrated and outraged Abner Snopes embraces his wanting of revenge and plans to light fire to the rug owners’ barn. He pours kerosene into a container and demands his son Sartoris to fetch him the oil. Instead he manages to escape and warn the owners of the barn of what is going on and his father is shot and killed. Sartoris acted out of the spur of the moment but he did what his heart wanted him to do.

He sees through his Father’s attempts of manipulation and puts an end to his reign of terror over his family. In the end he decides that support he was receiving from his family that his father stated that they were continuously giving him, was something that he could do without. This story is not a typical one when it comes to the topic of child abuse. Most people would think that they would hear about starvation, or beatings, or sexual molestation. But child abuse is harming a child whether it be mentally or physically and forcing a child to live with something like this can be severely mentally damaging. 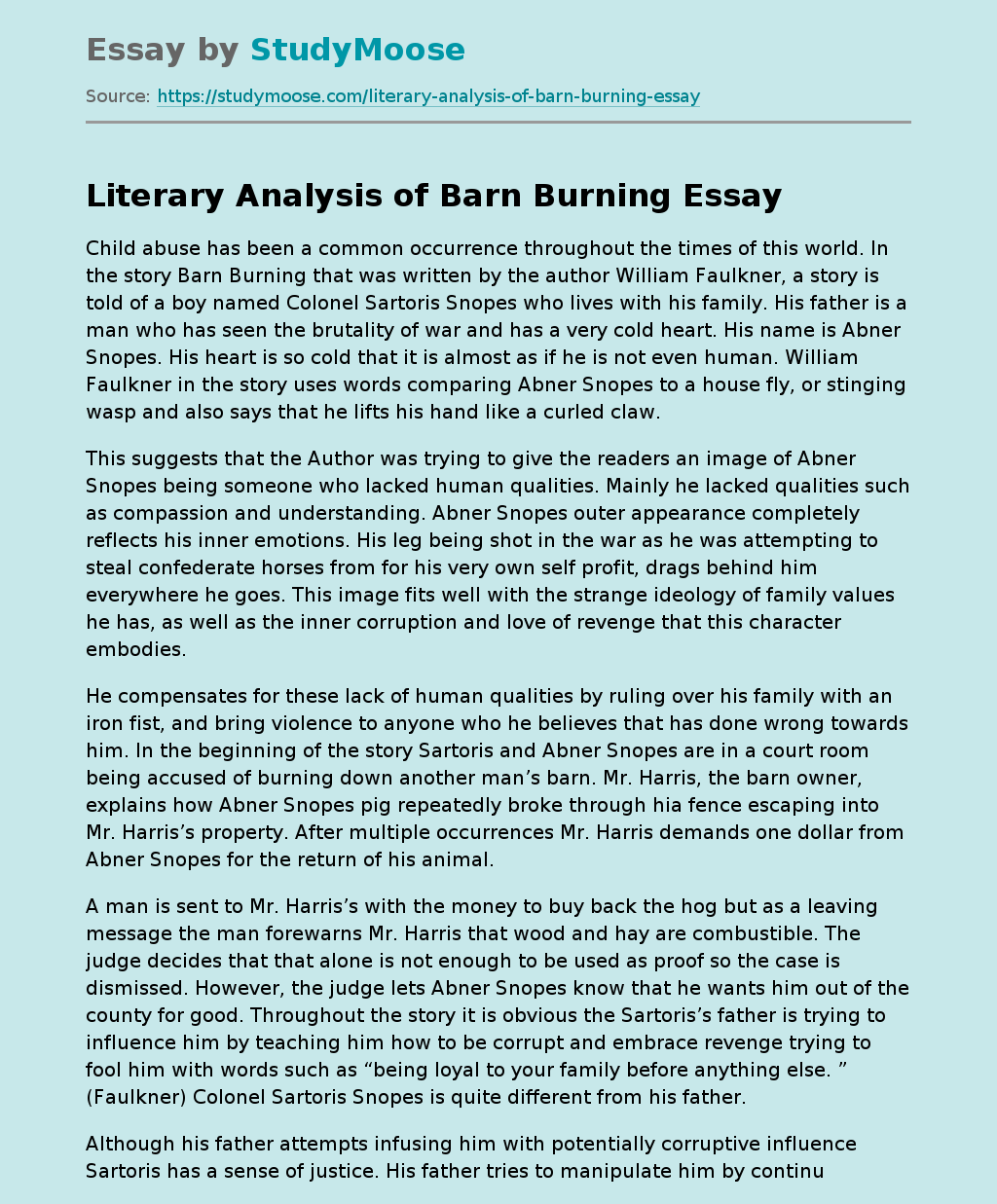