In Lame Deers story “ Alone on the Hilltop” he recalls the moment in life when his first hanblechia occurred at the age of 16. The first scene begins on the hilltop where Lame Deer had been brought by Chest, the medicine man. Lame Deer has been left all alone on the hilltop for 4 days nights with no water or food. The only thing that he had with him where his star blanket which his grandmother had knitted for him, a pipe with kinnickinnick, and gourd which contained forty pieces of his grandmothers flesh and tiny stones picked up from an ant heap.

Lame Deer knew though that after all of this was over he would no longer be a child, he would be a man and he would be given a man’s name. He started to smoke the pipe he began to feel comforted and his fear started to diminish. He describes that he felt like his forefathers, whom this pipe once belonged to, where with him on the hilltop and that he was no longer alone.

The thought of not being able to have vision still worried Lame Deer though. He wanted to be able to become a yuwipi but he knew that he could only become that was what his vision was. If he dreamt of Thunder Beings then that would make him a heyoka , a clown. Night time had arrived and began to feel the overwhelming presence of a big bird. He became overwhelmed by the feeling of the bird touching him and grasped the rattle in order to calm his fears.

Then he began to smoke from his pipe and began to sing and pray. He felt himself change, and began to hear human voices that were not ordinary.

A voice began to speak to him and he felt comforted by them, he then saw his greatgrandfather Lame Deer and he understood that his grandfather wanted him to bear his name. After this Lame Deer described feeling his nagi inside of him and a power surging throughout his body. Lame deer knew his vision had been fulfilled and that he would become a wicasa wakan. Time was lost for Lame Deer and before he knew it Chest had come for him. His hanblechia was complete and it was time for them to interpret his visions. He had also been given his man’s name Lame Deer.

This in my opinion was a very interesting account of American Indian rituals. Lame Deer did a great job on comparing and contrasting the “white folks” way of life with his own. He told us how Indian children are typically never left alone which gives us a better understanding on why he was so afraid of being alone on the hilltop. I feel like in this story I really got a better understanding of the Indian way of life. They seem to be very tight knit group who value tradition above everything. Family seems to be the most important theme as demonstrated by his grandmothers willingness to cut forty pieces of her own flesh in order to make the rattle. This whole aspect about them is admirable but at the same time I feel like they don’t really take any actual logic into account. The whole vision determines your life labor seem really fallible in my opinion.

I can’t really relate to this story in the sense that I have never really experienced any of these things as im not a Sioux. I do think though that this story can be related into our modern world in the sense that many kids are pushed into choosing a life career at a relatively young age. Lame Deer was only 16 at the time but that is only a mere two years younger than kids today. To some extent I found admirable that he at such a young age had already known what his life’s calling was. Overall the story was very enjoyable to read and it gave me very good insight on the tribulations of being a Indian.

Vocabulary gourd- the hard-shelled fruit of any of various plants,whose dried shell is used for bowls and other utensils

Lame Deers story “Alone on the Hilltop”. (2016, May 08). Retrieved from https://studymoose.com/lame-deers-story-alone-on-the-hilltop-essay 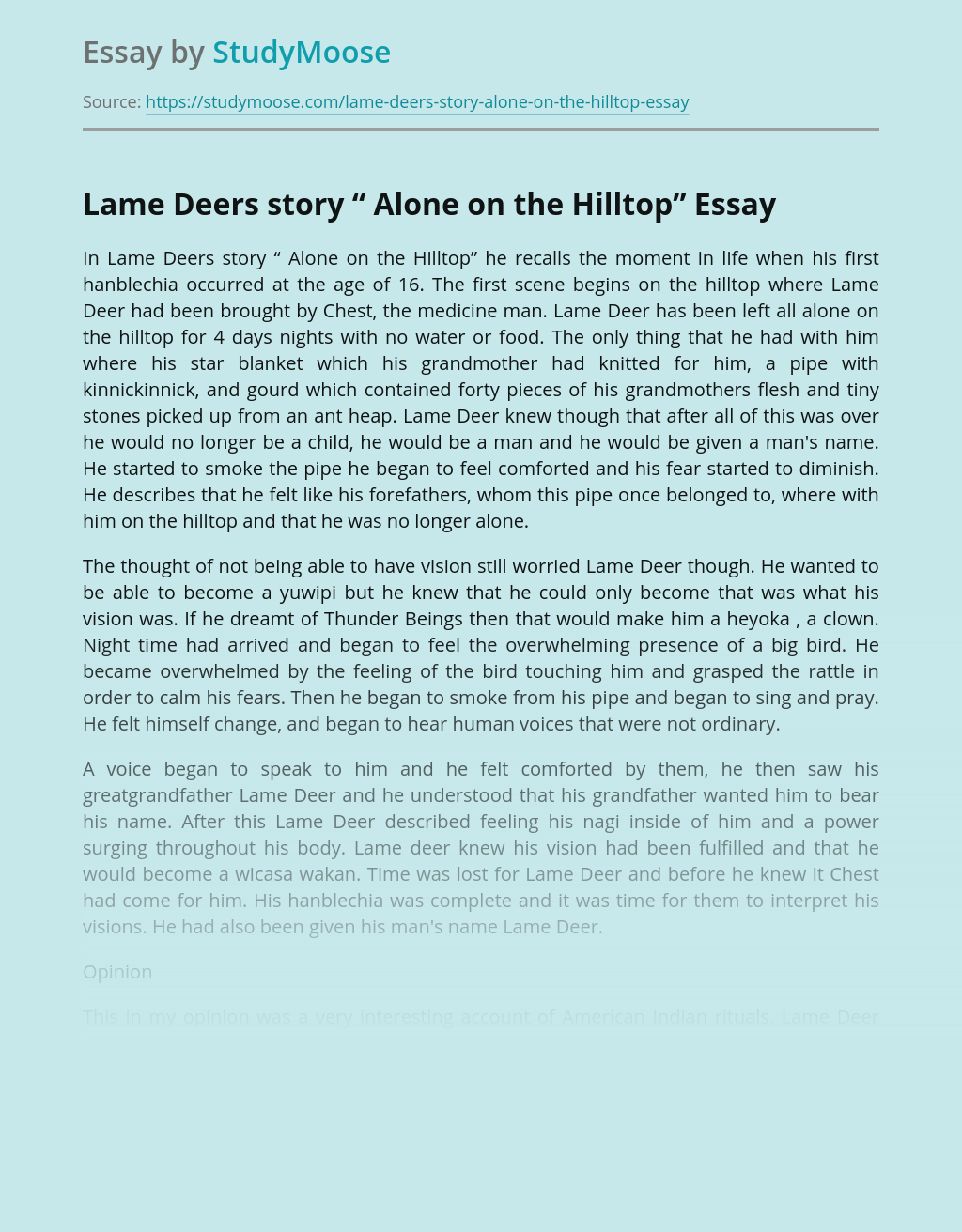 The novel, Some Prefer Nettles, by Junichiro Tanizaki, depicts the story of a troubled couple living in the Taisho period of Japan. The husband, Kaname, and the wife, Misako, are both frustrated with their unhappy marriage, struggling over the decision of divorce while keeping it a secret from everyone but Kaname’s cousin, Takanatsu. Both Kaname...

In Nisei Daughter book, the life and sacrifices of an American citizen with Japanese descendant family living in a Nisei encampment prior and during the Second World War was clearly illustrated as the author wrote her chronological memoir of the past. This much read book of Monica Sone who also known as Kazuko Itoi brought...

The novel ‘The Story of Tom Brennan” is written by Australian author J. C. Burke. The book is written in a first person perspective of main character Tom Brennan, who is seventeen years old and it portrays the way he deals and adjusts with his new life after a major tragedy has struck. The novel...

In the story Everyday use by Alice Walker, as narrated by an African American woman who is in the midst of making a decision as to whom she perceived deserving of a very important heirloom that signifies their family’s heritage. Her two daughters have no comparable qualities. Her oldest daughter Dee, who now preferred to...

Over time, Frank’s journey to rescue his debilitated sister, the siblings’ dependence on each other becomes more evident. Frank and Cee Money, the protagonists of Toni Morrison’s Home, exemplify this powerful need, a need that at times flirts with greed. The reason Frank feels so responsible for Cee is due to the fact while growing...

A Man Named Dave, by Dave Pelzer is the story of hope and eventual love and how a child called “It” finally found himself as a man free at last, after early childhood experiences as the son of a brutal, alcoholic mother. When his father is dying of cancer, Dave attempts to reestablish contact with...

One Hundred Years of Solitude by Gabriel Garcia Marquez

She unflinchingly goes on after the deterioration and death of her husband. She displays profound amounts of fortitude and perseverance. Ursula alone permitted the longevity of the Buendia family. Ursula prevented chaos by taking charge when needed most. Before the decline of her husband, Ursula did not appear as the superwomen that she eventually became....