Enzymes are a protein serving as a catalyst, a chemical agent that changes the rate of the reaction without being consumed by the reaction. Enzymes are proteins made up of long chains of amino acids. These form complex shapes. The enzymes are individuals, like the different players on a ball team, they have different specific structures and jobs. As one ball player may be very tall and one short, the specific different shape of the active site on an enzyme is unique and prepares it to mix with a certain substrate.

Don't use plagiarized sources. Get your custom essay on
“ Lab report on enzyme activity ”
Get custom paper
NEW! smart matching with writer

Without enzymes, the process of metabolism would be hopelessly slow. The reactant an enzyme acts on is referred to the enzyme’s substrate.

The enzyme will combine with or to its substrate. While the two are joined, the substrate is converted to its product by catalytic action of the enzyme. There is an active site of the enzyme molecule which is a restricted region that actually attaches to the substrate.

Amylase is an enzyme in human saliva and in other organisms and its substrate is starch.

When the active site of amylase binds with the starch, hydrolysis takes place. When the hydrolysis (the breaking of a chemical bond with the insertion of the ions of a water molecule) of starch is complete you are left with a disaccharide called maltose.

Enzymes are necessary for metabolic reactions, the question I pose is this–do variances of temperature, ph, substrate and enzyme concentration affect the rate of reaction?

To prepare for the experiment the following equipment was assembled: a spot plate, a test tube with amylase and starch in it, a pasteur pipet, and iodine. The spot plate was labeled in time intervals each two minutes apart. A drop of iodine was placed in each area of the spot plate. This will demonstrate how long it takes the amylase to hydrolyze

Using the pipet, a drop or two of the amylase/starch mixture was placed in one circle containing iodine on the spot plate. If the iodine turned blue, the hydrolysis is incomplete and the test was repeated at two minute intervals. If it remains the color of iodine the reaction is complete. The time that elapsed from the beginning of the the reaction is noted.

.1 ml of amylase was added to each test tube and the procedure with the iodine was followed and the results documented.

Then 18ml of starch to each tube, the proceedure with the iodine was followed and the results documented.

It was confirmed in this experiment that changes in the environment like temperature, ph levels, substrate and enzyme concentrations did effect the rate of reaction. It really should be evident that the substrate and enzyme concentration levels would effect the rate of reaction the was they did as it was noted in the intro of the paper the role each one of these plays in the reaction process. As far as temperature and ph effect on the rate of reaction the results were surprising and hard to explain, unless one thinks about the body and how it functions the best at a ph of around 7, neither acidic or alkaline. Likewise the body does not function well at a very high temperature or a very low temperature. 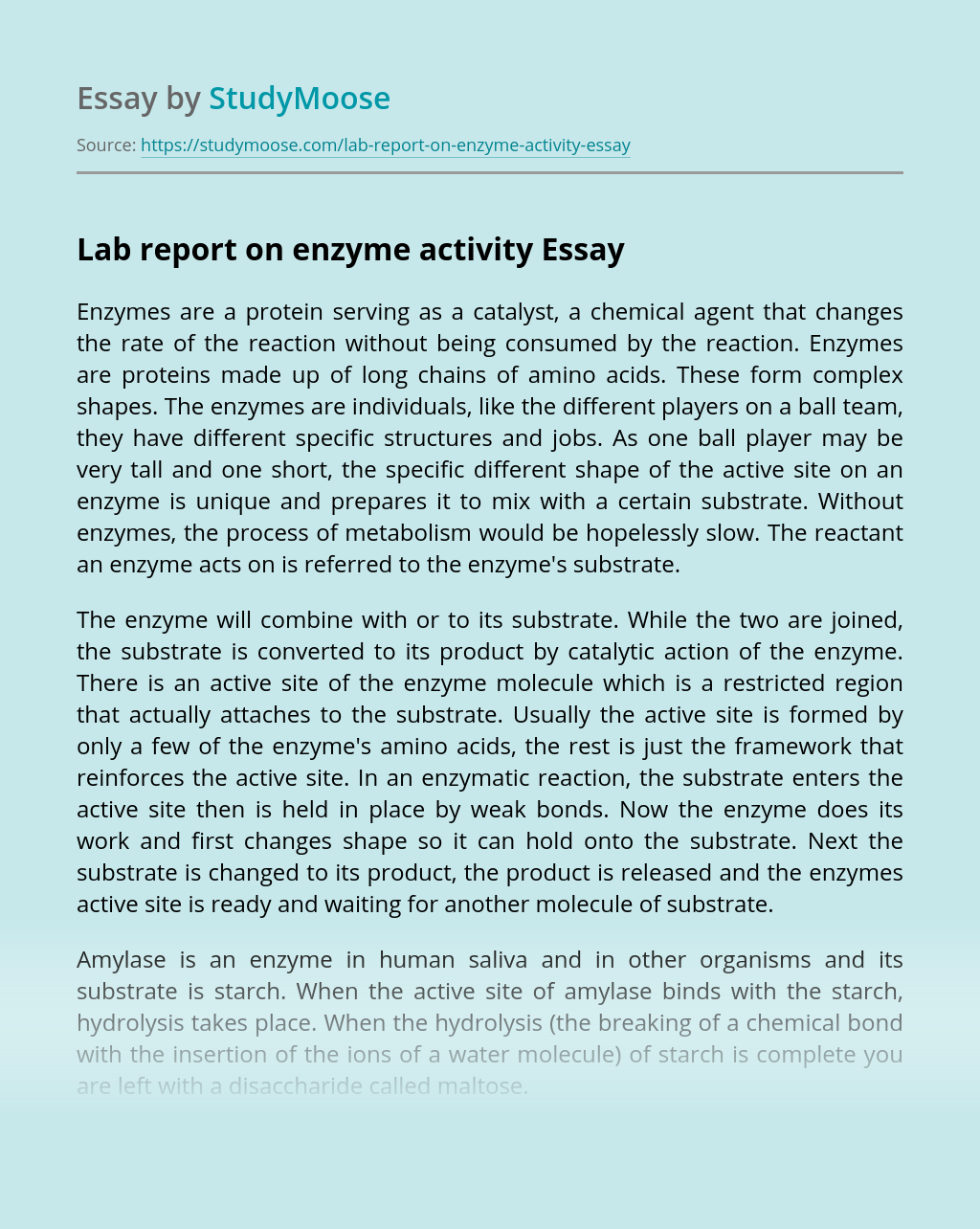