The woozy feeling when standing up too quickly. After going for a run, feeling as if one more beat and the heart would project itself out of the chest. Or quite the opposite and being in a very relaxed state. These are all changes one experiences at some time or another. What causes the different feelings and how each variable affects pulse rate and blood pressure has many wondering. Because of this curiosity, an experiment was performed to get some answers.

The purpose of the experiment is to see how different variables affect pulse rate and blood pressure. Before starting the experiment, self educating on background information was a necessity in order to obtain a full understanding of what exactly was going to be performed. What is blood pressure and how does it work? “As the heart beats, the heart pushes blood through a network of blood vessels called arteries. As the blood travels through the arteries, it pushes against the sides of these blood vessels and the strength of this pushing is called blood pressure.

It is known that pulse rate is the number of times the heart beats in one minute. (Gordon) Pulse is lower at rest and increases when higher activity is performed, like exercise. (Gordon) Pulse is taken by putting the tips of the index finger and middle finger onto the palm side of the opposite wrist below the base of the thumb. (Gordon) By pressing lightly with fingers, one could feel the blood pulsing beneath the fingers. (Gordon) After counting for ten seconds, the number of beats felt is multiplied by six to get the heart rate per minute. (Gordon) Normal pulse is between sixty and a hundred beats per minute. (Gordon)

Once data is collected from the variable of posture changes, exercise will be the next variable to look at. Immediately after exercising, it is hypothesized that arterial pressure and blood pressure will increase. It is thought because the body is performing high activity, it means that the heart has to work faster to be able to successfully perform venous return which then increases stroke volume and as a result increases cardiac output. Not only will the arterial pressure and pulse rate increase, it will be at its max range. Two minutes after exercise, it is hypothesized that the arterial pressure and pulse rate will decrease. Because the body is starting to calm down and come back down to resting, the heart doesn’t need to produce as high of stroke volume therefore decreasing the cardiac output.

Focusing on the last variable of cognitive stressor, the subject will have to spell a list of words forwards and backwards. It is hypothesized that while doing this, the subject arterial pressure and pulse rate will increase. This is to be thought because while the subject is spelling the words the mind will be under a lot of stress therefore causing acts of anxiety or nervousness to arise, making the heart beat faster than normal. Procedure:

“For procedures, refer to Lab 6, Activity 2, in the Anatomy and Physiology Lab Manual.”

Discussion/Conclusion:
To start off the experiment, a baseline was needed in order to be able to compare the different variables through out the experiment. The subject was instructed to sit and relax quietly while the blood pressure cuff and pulse plethysmograph were placed properly. After the blood pressure was taken and analyzed, it was found that the subject’s blood pressure was 122/64 mm Hg and a pulse rate of 60 bpm. Now that the baseline was obtained, continuing with the changing variables could take place. Starting with the variable of postural changes, the subject first reclined for three minutes. After the two minutes, the subjects blood pressure and pulse rate was taken and gave a reading of 120/52 mm Hg and 60 bpm.

Looking back at the hypothesis, it was hypothesized that after reclining for three minutes the arterial pressure and pulse rate will both decrease. Cross referencing the given data with the hypothesis, it was found that the results didn’t fully match with the hypothesis. The blood pressure did, in fact, decrease due to the relaxation state that the subject was in. On the other hand, the pulse rate stayed the same. Reflecting on that and looking at the variables in the environment, it could be said that the subject wasn’t in a state of full relaxation. The subject was instructed to recline on a cold lab table with other subjects and groups in the room. It is possible that the discrepancy in this experiment was the environment in which the subject was instructed to recline and relax.

Further dissecting why the data didn’t match the hypothesis, it was discovered that because the subject stood up very quickly, 500 mL or more travels down into the legs. It was thought, due to that reason it would mean less stroke volume for the ventricle to pump. Looking at it from a different angle, because the amount of blood that travels to the legs, it actually causes the heart to work more rapidly to evenly transport regular amounts of blood through out the body causing the arterial pressure and the pulse rate to increase.

Once the subject was standing for three minutes, the reading of the blood pressure was 130/52 mmHg and the pulse rate was 64 bpm. Comparing to the hypothesis, it was said that the arterial pressure and pulse rate would increase trying to bring the body back to baseline. Looking at the results, the blood pressure, in fact, decreased and the pulse rate increased, making the results partially confirm the hypothesis. Because it didn’t completely confirm the hypothesis, it could be said that the subjects body wasn’t able to get the body completely back to baseline in three minutes. It may have taken a few more minutes in order for the body to get back to a regular state.

After those variables were explored, the next variable tested was exercise. Instead of there being only one subject, two subjects were used. Subject #1 was a well conditioned subject, someone who works out on a regular basis and already has endurance. Subject #2 was someone who was poorly conditioned, who never does strenuous activity. Before any physical activity, a baseline was required so there was data that can be compared. The well conditioned subject’s baseline was an arterial pressure of 118/70 mmHg and pulse rate of 61 bpm.

The third and final variable tested was cognitive stressor. The subject was instructed to read 12 spelling words forwards and backwards at five second intervals. Before, just like any experiment a baseline needed to be obtained. After the reading was recorded, the first test began. The subject had to spell a series of words, as this was happening, the subject was hooked up to iWorx which is a system that reads blood pressure and pulse rate. Once the test had ended, the data was analyzed and it was found that the hypothesis of the pulse pressure and blood pressure increasing did not apply to the first part of the test.

Gordon, B. (n.d.). Retrieved from http://my.clevelandclinic.org/heart/prevention/exercise/pulsethr.aspx 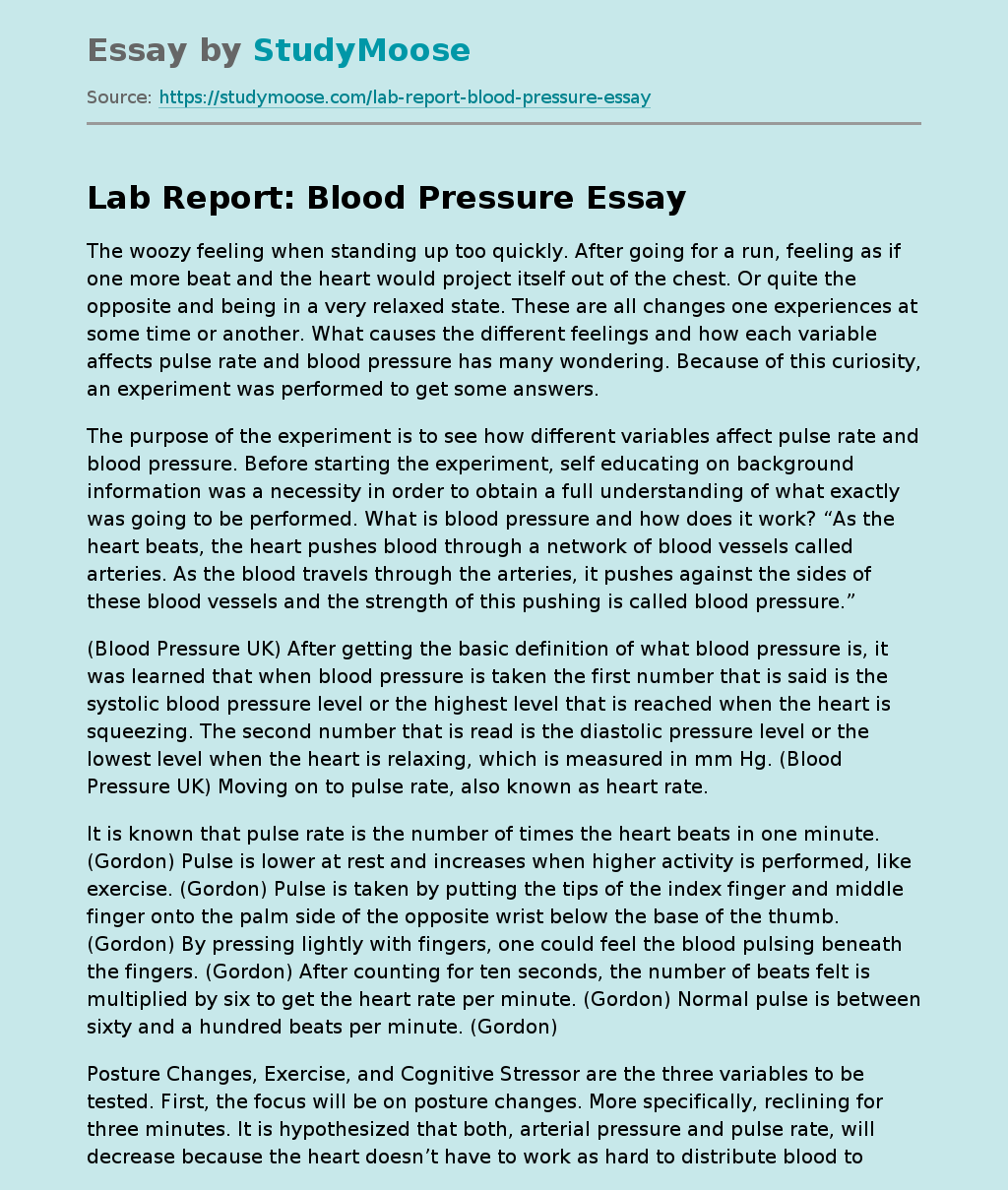