Everyone has the right to attain knowledge. Having knowledge can lead one to do great things, such as achieving a good score on a test, knowing what to do in cases of emergencies, or achieve things like winning a debate, contest, race, or game. And even though attaining knowledge doesn’t always come with happiness, knowledge can give one the power and opportunity to influence others and their choices and decisions. To best prove a person wrong in a debate or argument, knowledge is needed to make a good enough point to prove the opposing side wrong.

Nick tells us, “ He was employed in a vague personal capacity—while he remained with Cody he was in turn steward, mate, skipper, secretary, and even jailor, for Dan Cody sober knew what lavish doings Dan Cody drunk might soon be about, and he provided for such contingencies by reposing more and more trust in Gatsby.

… It was indirectly due to Cody that Gatsby drank so little.” (Gatsby 100) Gatsby had the knowledge of how people acted when drunk first handed.

What he had witnessed with Dan Cody influenced him drink only rarely. Also in chapter 6, Nick gives us the idea where Gatsby would have first gotten the chance at a wealthy life. Nick tells us, “And it was from Cody that he inherited money—a legacy of twenty-five thousand dollars. He didn’t get it. He never understood the legal devise that was used against him, but what remained of the millions went intact was left with his singularly appropriate education; the vague contour of Jay Gatsby hid filled out to the substantiality of a man.”(Gatsby 100) From this we can see that Gatsby attained enough knowledge to be capable to do whatever it takes to become wealthy. And being a part of the wealthy also influenced his choices to do what it takes to make it to the top, even if it is done through illegal means, which we find out later on in the book that it does.

Knowledge is also power because of the fact that having knowledge can make others look up to the person who holds it, for they seem wiser and may hold the right answers and steer them in a direction, good or bad. When I was in sixth grade, we had a group lab in science class. No one in my group had any idea on how to complete the assignment that was assigned, except me. With the knowledge I had attained from my science teachers’ lessons, I was able to influence my lab partners to listen to what I thought should be done and was able to steer my group into getting a B- on our assignment. Having knowledge is power when making a point because it will help prove the opposing side wrong and persuade others that you are in the right. In the heated fight between Tom and Gatsby in a hotel suite in New York City, Tom had made sure he had attained enough knowledge about Gatsby, his past and who he is, to persuade Daisy that he is not the one for her and that he isn’t what she really wants, and also to convince her to love him and forget Gatsby.

In the middle of the argument, Tom exclaims to Gatsby, “‘Who are you, anyhow? You’re one of that bunch that hangs around with Meyer Wolfsheim—that much I happen to know. I’ve made a little investigation into your affairs—and I’ll carry it further to-morrow. … I found out what your ‘drug-stores’ were.’ He turned to us and spoke rapidly. ‘He and this Wolfsheim brought up a lot of side-street drug stores here and in Chicago and sold grain alcohol over the counter. That’s one of his little stunts. I picked him for a bootlegger the first time I saw him, and I wasn’t far wrong.’” (Gatsby 133) This shows the reader the effort Tom has made to really gather his information about Gatsby to prove him wrong. With the knowledge that Tom had gained about Gatsby, he had the right information to show Daisy that Gatsby isn’t who she thought he was, and that Gatsby was not fooling anyone about who he really is and his past. And after Tom had brought up Walter Chase, Gatsby had an unfamiliar expression on his face. Nick tells us, “Then I turned back to Gatsby—and was startled at his expression.

He looked—and this is said in all contempt for the babbled slander of his garden—as if he had “killed a man.” …It passed, and he began to talk excitedly to Daisy, denying everything, defending his name against accusations that had not been made. But with every word she was drawing further and further into herself, so he gave that up, and only the dead dream fought on as the afternoon slipped away, trying to touch what was no longer tangible, …” (Gatsby 134) This passage shows the reader that Tom has made his point well enough to scare Gatsby, and well enough to convince Daisy to realize that Gatsby is just not the kind of person she wants to be with. Tom showed up Gatsby, and with knowledge, Tom was able to prove his point which makes puts him with more power over Gatsby and even Daisy. For afterward, Tom commands to Daisy and Gatsby, “‘You two start on home, Daisy, in Mr. Gatsby’s Car. … Go on. He won’t annoy you. I think he realizes that his presumptuous little flirtation is over.’ They were gone, without a word, snapped out, made accidental, isolated, like ghosts, even from our pity.” (Gatsby 135)

This passage shows Toms’ power over Gatsby and Daisy after proving them both wrong of their thought with the knowledge that he had attained. Attaining knowledge is power because one is then able to make what they think is the best decision are for them or for others based off of what they know. But having this power also has its consequences. During dinner at the Buchanan’s house, a phone call for Tom interrupts dinner. When he had gone into another room to attend to the call, Jordan Baker eavesdrops on the conversation. Jordan then tells nick, in front of Daisy, “Tom’s got a woman in New York.”(Gatsby 15) Later on that evening, Daisy says to Nick, “I’m glad it’s a girl. And I hope she’ll be a fool—that’s the best thing a girl can be in this world, a beautiful little fool.”(Gatsby 17)

These statements show Daisy’s knowledge about Tom’s affair with another woman. Even though she doesn’t use her knowledge to change the way things are between her relationships with Tom, she deals with the consequences that come with it. Knowing the about Toms affair leads her to deal with an unhappy life. But with knowledge of her feelings emotions for Tom and her knowledge of how love can hurt, she knows that she would want her daughter will be a beautiful fool, oblivious to the bad and the wrong in the world. So her daughter may live a happier life not having knowledge of the bad things in life that has made Daisy unhappy. Some people argue that ignorance is bliss because what you don’t know doesn’t hurt you. Some people believe ignorant people live a happier life. They believe that not knowing every detail could sometimes spare hurt, stress, and depression. These people are wrong because without knowledge, ignorant people would not really know the truth about a situation and they would be oblivious to what is really going and may get hurt when they finally realize the truth.

For example, in chapter 1 of The Great Gatsby, Daisy tells Nick, “I’m glad it’s a girl. And I hope she’ll be a fool—that’s the best thing a girl can be in this world, a beautiful little fool.” (Gatsby17) Daisy wants her daughter to grow up to be oblivious to all the hurt in the world so she can be happy, unlike how Daisy is, living day by day knowing that her husband has been having an affair with another woman. When the truth comes out, being ignorant and oblivious may not hold a happy ending. Having knowledge is very important for a person to have. Without knowledge, we would not be able to consider things for ourselves and make good decisions.

For one to have the power to influence others choices and decisions, they must have knowledge to persuade others. Proving someone wrong in an argument or disagreement takes knowledge to show them and witnesses that the opposing side is wrong. Even though holding knowledge of a certain subject can have its consequences, the one who holds it will be able to make what they think the best decisions are for them or others based off of what they know. Attaining knowledge is a very important key in life. It can open many doors and opportunities for one who is willing to attain it. Knowledge can come with happiness, but not always. But knowledge will for sure get one further in life than one who is ignorant to their surrounding and oblivious to situations. 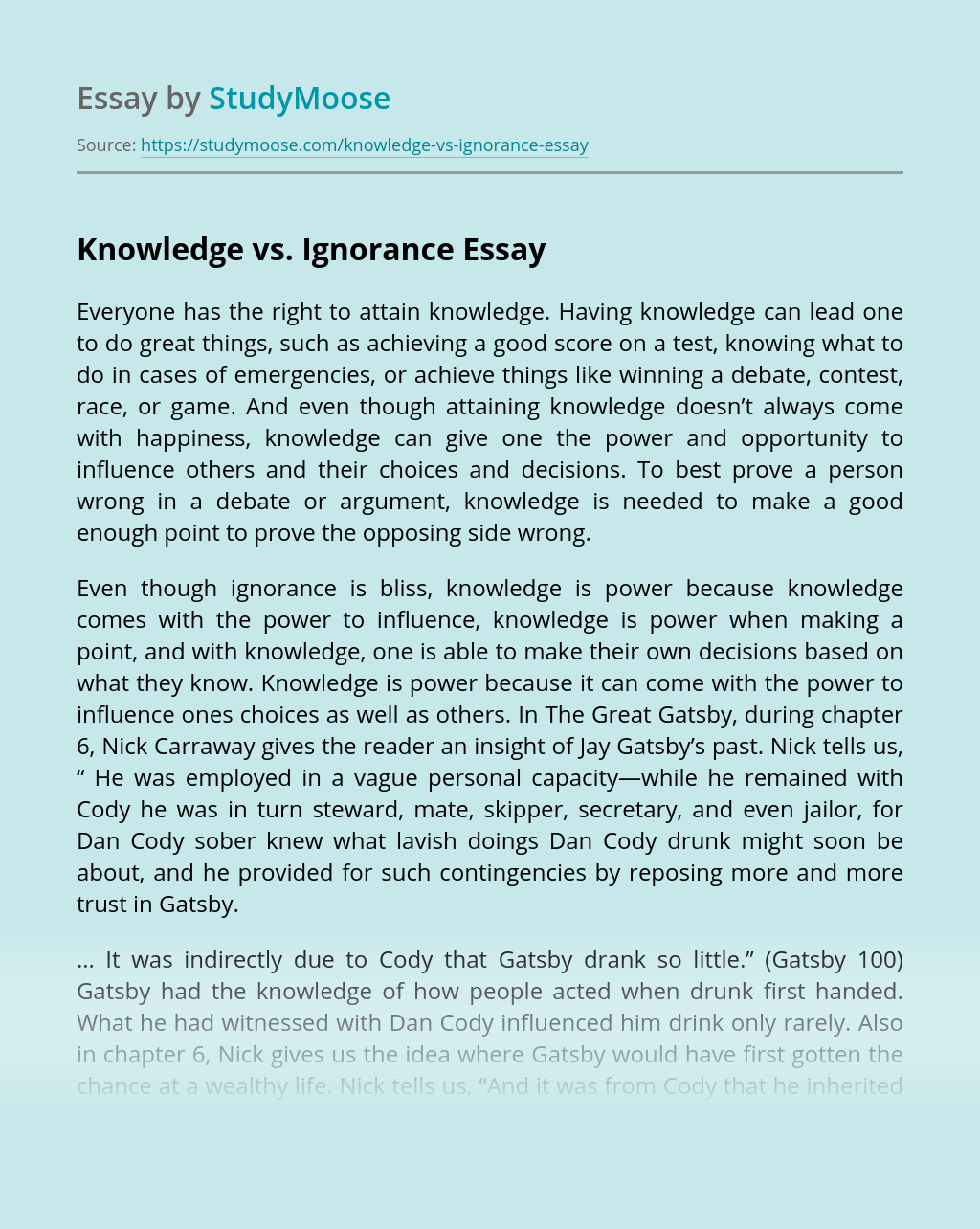 Don’t waste time
Get a verified writer to help you with Knowledge vs. Ignorance
Hire verified writer
$35.80 for a 2-page paper
Stay Safe, Stay Original