There are over thirty-thousand suicides a year in the United States alone. Whether or not suicide is acceptable is a moral issue. Immanuel Kant’s categorical imperative can be applied to this moral issue. Kant strongly disagreed with suicide, because it was not a morally responsible decision; I will give a summary of the Categorical imperative, and use this information to develop an argument that Kant or a Kantian would use to argue against suicide. Kant’s Categorical imperative argued that an action or rule is moral if it is universally good.

If everyone sees an action as good and can perform the action than it is moral. The categorical imperative applies to all rational beings regardless of one’s personal motives and desires. Kant believed that we those actions that if you would want an action performed on you than it are moral. “Act only on that maxim by which you can at the same time will that it should become a universal law (309).

” Based on the categorical imperative, Suicide is immoral because it is our purpose to acquire happiness.

If we all committed suicide as we pleased, then we would seize to exist, which is unethical. Because suicide prevents us being happy, it is not morally permissible under Kant’s categorical imperative. Humans should be thought of as a means not an ends. If we committed suicide than we are not achieving our potential to be happy, which is unmoral. To Kant suicide was “in no circumstance permissible. ” Kant believed that any man, who would survive a suicide attempt, had now discarded his humanity and was lower than a beast.

Suicide degrades our humanity, because it takes away our basic purpose. One could argue that Kant biased to a religious view of suicide being immoral. Kant believes that our lives belong to God and are not ours to end. It is also questionable to categorize our lives as a thing, and debase his humanity over a decision that they have made. Suicide is immoral because it does not bring happiness, and is not universally acceptable. Because we can no longer make moral decisions Kant argues that suicide is not morally acceptable.

Kant states that “It cannot be moral to root out the existence of morality in the world. ” Suicide prevents you from performing anymore acts of morality. According to the Categorical imperative, if we can perform a good deed we should, regardless of whether there is anything to be gained. We are bound by a set of universal laws that all should follow unconditionally. We should not commit suicide because; we have an obligation to perform good deeds in the world. Our purpose as humans is to perform good actions in the world, but we cannot do this if we are dead.

Committing suicide prevents us from performing actions and is an irrational decision to make, which violates the Categorical Imperative. If one wants to commit suicide they should think of all of the actions that they would no longer be able to perform in death. One should strive to perform moral actions in life and to continue living as long as possible. We are each unique, and have actions that only we can complete. Works Cited Cahn, Steven M. , and Peter J. Markie. Ethics: History, Theory, and Contemporary Issues. New York: Oxford UP, 1998. Print. 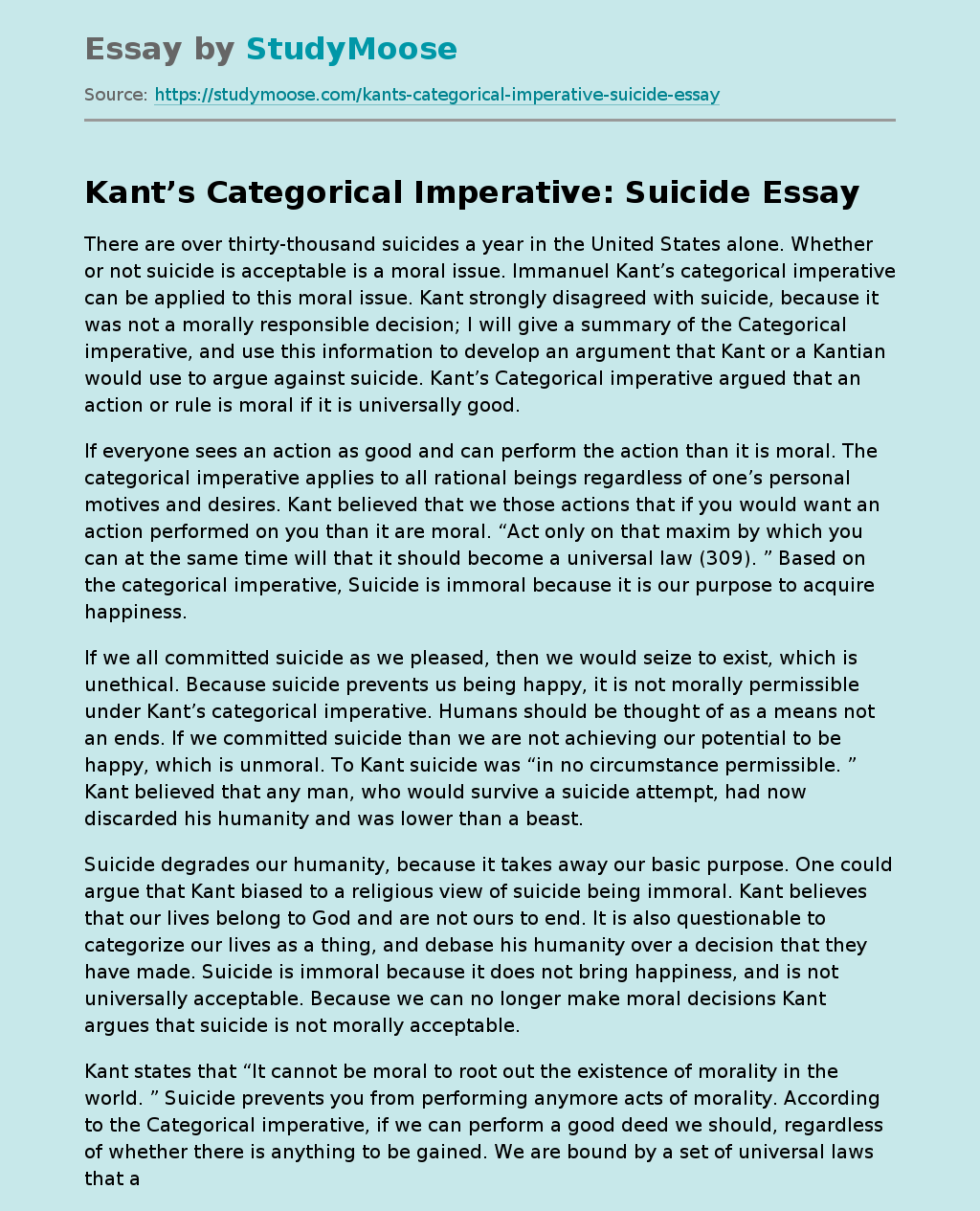