Technology is one of our most beloved pieces of ongoing history, but does it cause more harm than it does help? In the film Jurassic Park, Steven Spielberg portrays the theme technology as an evil force to be reckoned with. Spielberg shows this through the plot, characters, and dialogue. Technology is a major theme because other than the hidden context that viewers have to seek it is everywhere in the film. A viewer thinks of technology as a helping hand, shortcut, or an advance of human nature, but in the film it is portrayed as something that should not be used to try and control nature.

Don't use plagiarized sources. Get your custom essay on
“ Jurassic Park ”
Get custom paper
NEW! smart matching with writer

Also the complete opposite of what you would normally think, it will not work in your favor. The plot of Jurassic Park shows many ways of people being too reliant on technology. One way it shows this is in the very beginning of the movie they are transporting a dinosaur into the park and the cage had a green light on meaning that it was turned on and ready to transport the dinosaur, despite the green light being on a man was killed when he should have been completely safe (Jurassic Park).

This sets the tone for the rest of the movie that you should never rely too much on technology because nothing is perfect. Another way the film Jurassic Park shows the theme overreliance on technology is when Nerdy, the computer nerd, turns off all the parks systems the electric fences shut off and they became completely vulnerable (Jurassic Park).

On top of everything they could not even call for help because the phones were also down. Again, this just shows them being too reliant on technology.

All this is caused because of Hammond, he is the creator of Jurassic Park and he is the one who counts on technology the most. The characters in the film showed the theme by their character arcs. Hammond, for example, started a park to show off the wonders of real dinosaurs from a safe distance of course. He counted on technology to run everything and keep people safe. When everything started going bad, everyone said they should just shut it down and not go on with this project.

Hammond continued to fight for it, but in the end he gave up on it just like everyone else already had. Grant on the other hand hated technology from the start and did not want anything to do with it. Grant was the antithesis of technology, in the beginning of the film he was excavating and he hits a computer and it stops working this was foreshadowing that technology can break down at any moment. These characters symbolize the theme by what they go through in the film, as well as what they say. Steven Spielberg portrayed the theme by the dialogue in his film, Jurassic Park.

Dr. Ian Malcolm said “God help us, we’re in the hands of engineers. ” (Jurassic Park), this shows that Malcolm does not trust in technology all he wants it get the fame and money. In the film Jurassic Park Hammond said “We spared no expense. ” (Jurassic Park), this was in the middle of the film meaning everyone else had already lost hope for the park and just wanted to get out but Hammond still believed in the park and also believed that it could keep going. Hammond also said “Dennis, our lives are in your hands and you have butter-fingers. (Jurassic Park), was a way of foreshadowing events that later came in the film, those events were, Dennis Nedry, the one running the behind the scenes of Jurassic Park, would turn all the systems off, put a encrypted password on, and slip away from the headquarters only to be killed and eaten by raptor, leaving the rest of the crew and family helpless.

Steven Spielberg made you seek the theme “overreliance of technology” through the dialogue, not making it as obvious as other key events in the film. As evidenced by Steven Spielberg’s Jurassic Park, film makers can use various filmmaking strategies to influence the theme of a film.

Steven Spielberg used characterization, dialogue, specific scenes, and the plot to portray the theme “overreliance of technology”. Spielberg showed if one relies on technology so much it can get to a point where if something were to happen to technology you would wander around aimlessly not having the slightest clue on what to do. Steven Spielberg used this though various techniques, including, the plot, characters, and dialogue. Audiences should think twice about being dependent on a device that at any moment could become dysfunctional, they would have no idea what to do if that were to happen. 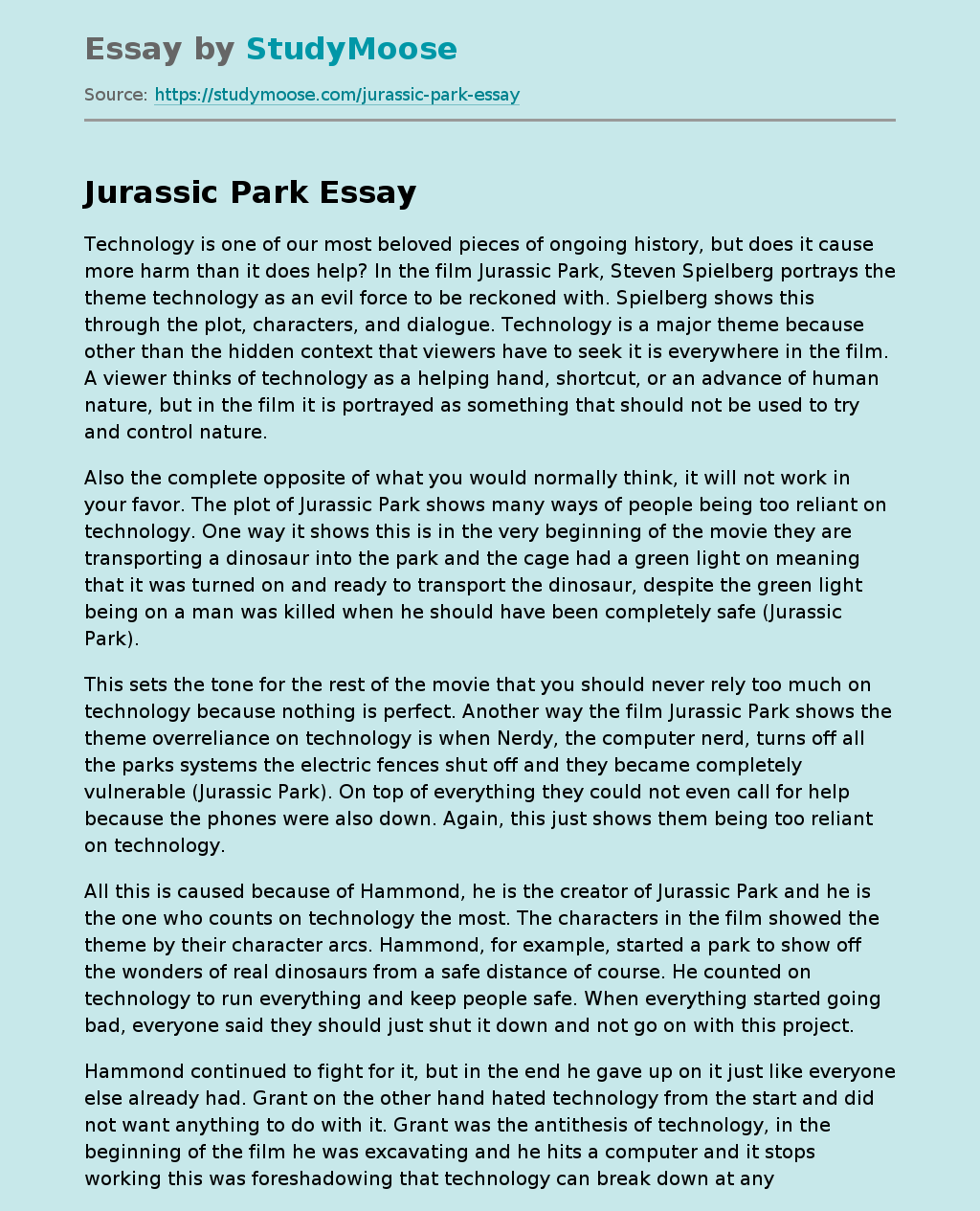