The Jextra Neighborhood case study is an evidence of the growing effort by Multi National Corporations to extend their operational base to take advantage of the increasing benefits associated with globalization. The case highlights the managerial capabilities and style of the Manager, Tom Chong; the cultural variations in the perception of business as an entity and its relationships with society, employee attitude to work ethics, and legal variables governing the operations of international corporations.

The Malaysian system poses a socio-ethical dilemma especially with the giving and receipts of bribes by appointed employees as well as the exchange of favors (or request thereof) between government officials and businesses.

How Should Tom Chong resolve the issue

Concerning the Mayor of Klang’s request, Chong must first assess his own degree of power and authority implied by his position as Country manager. The appointment of a country manager as part of the organizational hierarchy conforms to the management principle of authorization, which mandates equable authority and power to enable managers carry out assigned duties.

Such authorities usually have limitations especially in situations where the action or inaction of the officer will affect corporate commitment financially or otherwise. Due to the value of financial capital involved, and the legality thereof, Chong should refer the request in a memo to his immediate boss with copies to corporate headquarters in line with the principle of communication, which encourages a forward-backward linkages and consultative approach to organizational decision-making processes. Even if the legal implications are favorable, the final decision made with regards to the mayor’s request must take into consideration the various business indices such as the time needed to break-even and recoup investment, potential market size, growth matrix and competitive threat for comparison with larger corporate goals.

The original Jextra store plan did not consider the flyover road as a priority, which may help narrow the choice options to the school project. In addition, Malaysia law is silent over business contribution for social programs and there is wide example for the practice. If considered, Jextra could make the school financing process public and transparent with payment made directly to a body appointed by the city administration that has oversight for contributions and disbursement, and controls for effective accountability. What Should Chong do, about the rumors about the bribery and kickbacks to the category manager (CM)? As the country manager, dealing with the bribery and kickback rumors by the CMs is within Ching’s administrative supervision and jurisdiction. In this case, the CMs are expected to be accountable to him and to carry out their duties according to the laid down procedures as dedicate in the Jextra Code of conduct. Chong should first have a close door meeting with Arif Alam and inform him about the information he has received about the activities of the CMs in general as well as the seriousness of its implications if anything should known.

He should then recommit the CMs and all other employees to the Jextra Conduct Code (JCC) by running workshops for the staff. At the conclusion of the workshop, the CMs should make to sign an undertaking that expressly promise their commitment to the JCC. The workshop can made an annual event during which personnel from corporate or regional headquarters could be asked to attend for added importance Suppliers, individuals and organizations that do business with Jextra should also be educated about the Jextra CC from the first time a business relationship is established. Contractual agreement must have a section enforceable at law that details an understanding of the requirement for honest dealings devoid of bribery kickbacks and other corrupt practices to, from or by a Jextra employee during the period of the business relationship. The agreement should also make clear procedures for business engagement and the consequences for a breach including abandon and prosecution.

Does the jextra Business Code of conduct help chong in resolving the issue? Jextra’s business conduct code does not seem helpful to the manager, Chong in resolving the bribery and kickback issues at the organization. In the first place, the document is settled in ‘cautions and admonitions’ instead of the inherent force of the law. What is more, there are no meaningful arrangements in the document. Besides, even though the code allows gifts and entertainment of ‘small/minimal’ value to guest and suppliers, there is no definite amount given either by department or rank/title such that, the value herein involved may be subjected to acceptable interpretations and variations from department to department and between individual employees. Such lack of specificity exposes the manager Chong and limits the options available to him for dealing with personnel/employee conduct because of the likelihood that, employee may see his actions as ‘refer his own measures’ instead of company regulation.

Are these the kind of issues that Chong should have anticipated as a country manager? As a manager of an international company, Chong should expect to encounter cultural variations or collisions in business and social relations in Malaysia. Local expectations and company ethical policies do sometime clash during the execution of business objectives. However, managers must advice staff to stick with the tried and tested laid down policies. Managers many recommend a review of policies in the face of strong objective evidence for alternative approaches. Such ethical pursuit may help the company in case of legal suits; solidify the managers observed integrity whiles setting a standard for change. 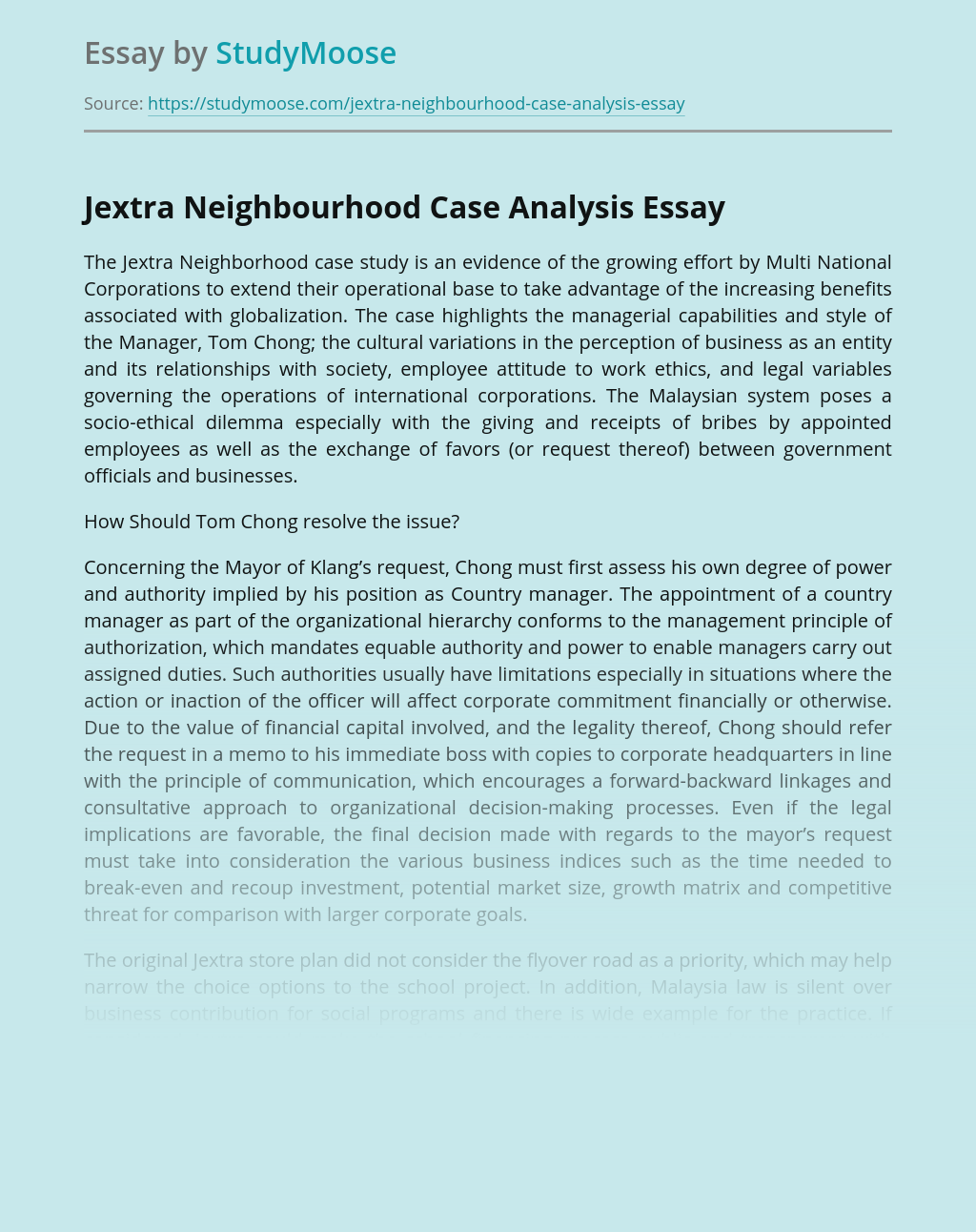 Rate this post Introduction Initial business governance developments in the UK began in the late 1980s and early 1990s in the wake of business scandals. Cadbury Report (1992) specifies ‘Corporate Governance as An Act of governing by the board of Directors”. Financial reporting irregularities resulted in the establishment of the ‘Monetary Elements of Corporate Governance...

Rate this post Discuss the importance of international trade to the company’s business (4.1) International trade is very important in this era for every international company, trade (export/import) in capital, goods and services between countries. This topic discussion about Virgin Atlantic Airways, for them international is very vital in commercial flight business. What is the...

Rate this post International Joint Ventures (IJVs) are becoming increasingly popular in the business world as they aid companies to form strategic alliances. These strategic alliances allow companies to gain competitive advantage through access to a partner’s resources, including markets, technologies, capital and people. International Joint Ventures are viewed as a practical vehicle for knowledge...

Rate this post Tootsie Roll Industries Inc. and its branches makes and sells candy including “Andes mints, Junior Mints, Charleston Chew, Mason Dots, Sugar Daddy, and the ever popular Tootsie Roll, which has been made from the same formula for over a 100 years” (Hoovers Academics, 2012) Tootsie Roll Industry’s customers include a wide variety...

Rate this post The TallTree2 Hotel Casino is a 640-room resort complex featuring a full range of Nevada-style gaming with slot machines and table games. Besides the hotel and casino, it also operates four restaurants, two entertainment showrooms and three gift shops. Because of the economic environment at the time, TallTree2 wanted to improve its...

Rate this post An evaluation of Lonrho’s corporate strategy should start from the two main key issues: in what businesses the firm should compete and how corporate headquarter should manage those businesses. Lonrho’s profile in 1996 included Agriculture, Sugar, General Trade, Hotels, Manufacturing, Mining&Refining and Motor&Equipment. The level of diversification was clearly high and the...

Rate this post There are many people and groups that have an interest in the running and the functions of Oxfam and we call them stake holders. Below I will give examples of stake holders and explain how they take an interest and how they influence the company. Throughout D1 I will be stating the...

Rate this post Introduction This case first walks us through the journey of the launch of Refrigerated Pasta and Sauces by Nestle Refrigerated Food Company (NRFC) in the U. Don't use plagiarized sources. Get Your Custom Essay on Jextra Neighborhood Corporation Case Analysis Just from $13,9/Page Get custom paper S. markets and then their decision...