Traditions and rituals have become an indelible mark that one person carries from the time he or she was born until his or her death. The Jewish and Hindu, in particular, cherish special occasions marking the major transitions and stages in the individual’s life from birth to death. Jewish Life Cycle Rituals From the time that a person is born, he is surrounded with rituals and traditions that would eventually become a part of his existence. When a Jew is born, his father will be called to recite the aliyah at the synagogue and pray for blessings for his wife’s and son’s health.

Don't use plagiarized sources. Get your custom essay on
“ Jewish and Buddhism Life Cycle Rituals ”
Get custom paper
NEW! smart matching with writer

This is done on the first Sabbath after the baby is born (ReligionFacts, 2008). The rituals following the birth of a child are called brit milah (for boys) and brit habit (for girls). Brit milah includes prayers and blessings, aside from the naming and circumcision. A mohel conducts the circumcision. Brit habit, on the other hand, refers to the naming ritual for girls.

There is also a ritual called simchat bat wherein prayers and songs are included in the naming ceremony. This is done eight or 15 days after the birth (Konick, n. d. ). The ritual following brit milah is Pidyon Haben, which means Redemption of the First-Born Son.

This ritual stemmed from the belief that everything that is first and best belongs to God (ReligionFacts, 2008). During the ceremony, the boy is garbed in special clothes and his father brings along five silver coins and presents him to the Kohen.

The Kohen is in charge of the whole ceremony. He also recites the Kiddush and drinks the wine. The Kohen then puts the coins over the boy’s head and blesses him (BecomingJewish, 2009). When the boy reaches the age of 13, the Jewish community considers him an adult. This is also the stage where he becomes a bar mitzvah (Son of the Commandments).

In girls, it is called bat mitzvah (Daughter of the Commandments) (ReligionFacts, 2009). Another important ritual in the lives of Jewish is marriage. After the couple announces their engagement, there is a festivity where the couple’s family and friends attend. This symbolizes the willingness of both families to have their children wed. The entire wedding ceremony entails many activities, eventually leading to nisuin. This is the part wherein the couple stands under chuppah (canopy). Chuppah is the symbol of the couple’s new home. The couple recites the seven marriage benedictions. The bride and groom also share a glass of wine.

After the ceremony, there is celebration with music and dancing. Then the married couple heads to their honeymoon (ReligionFacts, 2009). The life cycle ends with death. As the family is notified of the death of a family member, the child tears his clothes on the left side while other mourners tear their clothes on the right side. The Jews do not believe in autopsy, embalming and cremation. The body is washed and dressed in white tachrichin. The Jewish observes the placing of the body into the ground. A shomer also recites Tehillim (Psalms) to the dead as a show of respect (BecomingJewish, 2009).

When one grows up in a country that has culture, traditions and rituals different from others, formation of his or her identity and personality is affected. These rituals and traditions have an important role in one’s identity. Once a person determines his social identity, he will continually affirm it. This explains why Jews behave or act or think differently from Americans. In addition, the voluntary and involuntary experiences that Jewish individuals have throughout their lives play an important role in the formation of identity. Involuntary experiences refer to those that result from the parents’ upbringing.

Voluntary experiences, on the other hand, refer to choices that an individual takes about being a Jewish. Moreover, there are Jews who come from intensive Jewish backgrounds. They tend to be more influenced as their families are committed to Jewish life (Horowitz, 2001). Hindu Life Cycle Rituals The Hindu culture also has its own set of traditions and rituals that are different from other cultures. Even before a child is born, certain rites are performed to make sure that both the mother and the child will be healthy. Right after birth, the father touches a gold spoon or ring dipped in curds, honey, and ghee to the baby’s lips.

Then he whispers vak into the baby’s right ear three times. In addition, mantras are recited for an enduring and long life. Rituals also include the baby’s firsts, such as first visit to a temple, first feeding of solid food, ear-piercing, and first haircut. Young males are also subject to upayana, an initiation ceremony for six to 12-year-olds. This ceremony signals the transition to adulthood. The ceremony also includes the boy’s recitation of the Gayatri Mantra and the wearing of a sacred thread over the left shoulder. Those who wear sacred thread are called twice-born (Cline, 2009).

Another important ritual for the Hindu is marriage. During this phase, the parents of the couple are the ones who will decide upon the betrothal and date and time of the wedding in accordance with astrologers. For Hindu, the bride represents the goddess while the groom represents the god. Hindu marriages are elaborate, involving the groom’s travel to the wedding site riding a caparisoned white horse or a limousine. One important part of every Hindu marriage is the reciting of mantras by the priests (Cline, 2009). Death also ends the life cycle that involves ceremonies.

Hindu believes in cremation, but others practice burial. If the body is cremated, the closest relative is put in-charge of lighting the funeral pyre and collecting ashes and fragments of bones that will be immersed in the holy river. After this, the mourners will take a purifying bath. In much the same way, Hindus’ formation of personality and identity are affected by the surrounding culture and rituals that they observe as they grow up. A Hindu also acts in a way that the society dictates as right. For instance, religious beliefs have a direct influence on Hindu women’s roles and responsibilities (Jarayam, 2008).

Historical records would show that Hindu women used to be treated as second class citizens. In fact, they walk a few steps behind their husbands. Although the times are changing and there have been improvements on the role of women in the society, there will still be cases wherein women are still abused or treated as inferior (Jarayam, 2007). Situations like this can affect the development of one’s identity and personality. References BecomingJewish. (2009). Jewish life cycles. Retrieved February 10, 2009, from http://www. becomingjewish. org/jlife. html Cline, A. (2009). 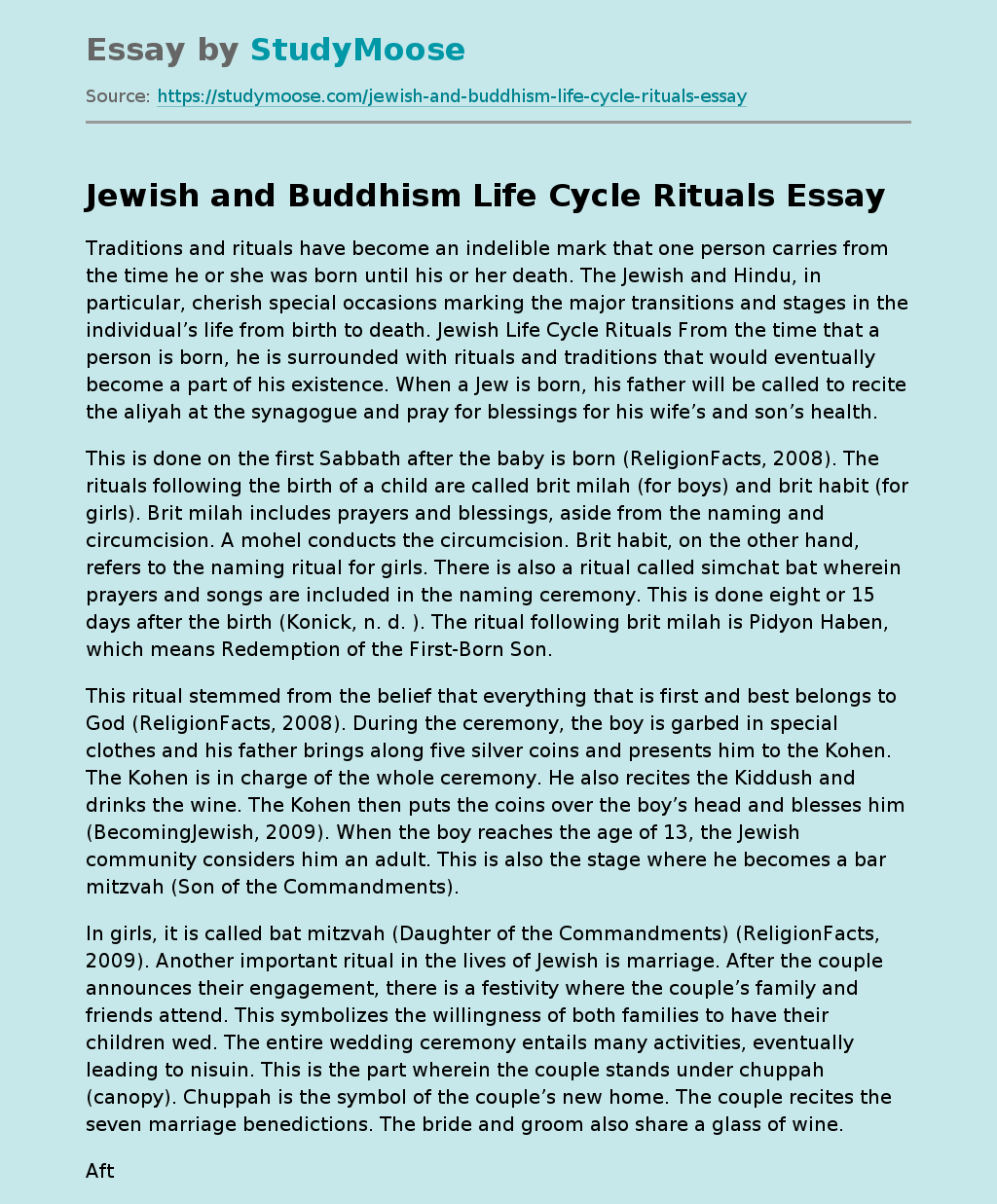