Former president John F. Kennedy once said: “Every aspect of the American economy has profited from the contributions of immigrants”. For hundreds of years, immigrants have been traveling to America, many with hope for better opportunities, others were forced to travel in order to help grow the economy. No matter how they came over, they have changed America significantly. Migration throughout the United States had a huge impact, specifically establishing Jamestown and Plymouth Colony, the Corpse of Discover, and the Great Migration.

Don't use plagiarized sources. Get your custom essay on
“ Jamestown Colony and It`s Impact on American Identity ”
Get custom paper
NEW! smart matching with writer

In the 1600s the British came over to America for better opportunities, by 1607 they formed the first colony called Jamestown. The colony itself almost failed due to the lack of money, but they survived by farming tobacco and selling their crops. Another successful colony was Plymouth, where men and women came over on the Mayflower in hope to spread their religion and gain freedom. These servants would willingly come over to get out of the country they were in and would work towards a better life.

The indentured servants signed a contract to work under a set amount of time to earn their freedom. While many worked in labor they got the new life they’ve always wanted. As the colonist and indentured servants came over willingly, the men, women, and children who were placed in slavery forcibly came to America against their will. When one person of your family becomes a slave, every other family member after does too, this is called chattel slavery. The slaves were treated as property, they were sold and traded off.

204 years later in 1804, Thomas Jefferson sent Lewis and Clark on an expedition to explore the West. As they traveled West conflicts began between the colonists and the Native Americans, but it allowed the colonists to gain more territory and travel to settle West. After America wanted to expand in 1838, so they forced the Native Americans out of their homelands in the middle of a cold and harsh winter, which began the Trail of Tears. Before the natives were forced out of their homes they lived in the Southeast area of the United States. They were forced to travel over 1,00 miles by foot to the West, where America placed reservations for them. Natives lost all their trust in America, and this caused one of the worst moments in American history. After 9 years, America wanted more expansion and to gain more territory. This led to the Mexican-American War from 1846 to 1848, where America gained 1/3 of Mexico’s territory while Mexico overall lost 1/2 of their territory. This showed how much power America had over other countries.

As Immigrants have been coming to America for quite some time, more want to come today for the opportunities America holds for them. As many people left their home country and came to America, Ellis Island, an immigration center in New York was set up. This set the stage for the Great Migration 24 years later. The African Americans were tired of being discriminated against in the South with the Jim Crow Laws, racial violence, and low paying jobs. They read in magazines how the North provided acceptance and high paying jobs, and how they could have provided a better life for their families. About 1.2 million citizens migrated North, increasing their population greatly. While the immigrants were coming over and the African Americans were migrating North, America’s native-born citizens did not like it and all the change that it caused. The government put a policy into place to address this discomfort protect their traditions. Although some were fine with the immigrants coming, many were not and wanted to keep America the way they felt it should be.

Establishing Jamestown and Plymouth Colony, the Corpse of Discovery, and the Great Migration are big events that have helped shape the “American identity”. Jamestown and Plymouth set the idea of the American dream and all the opportunities that were available for them; for example, cash crops and religious freedom. The Corpse of Discovery was an expedition that led Lewis and Clark to discover the West. Lastly, the Great Migration gave freed African slaves hope and opportunity in the North. When Africans started to populate cities, “ghettos” were created, they were neighborhoods that were dominated by diverse races. Thus making each city its own melty pot, and now America as well. 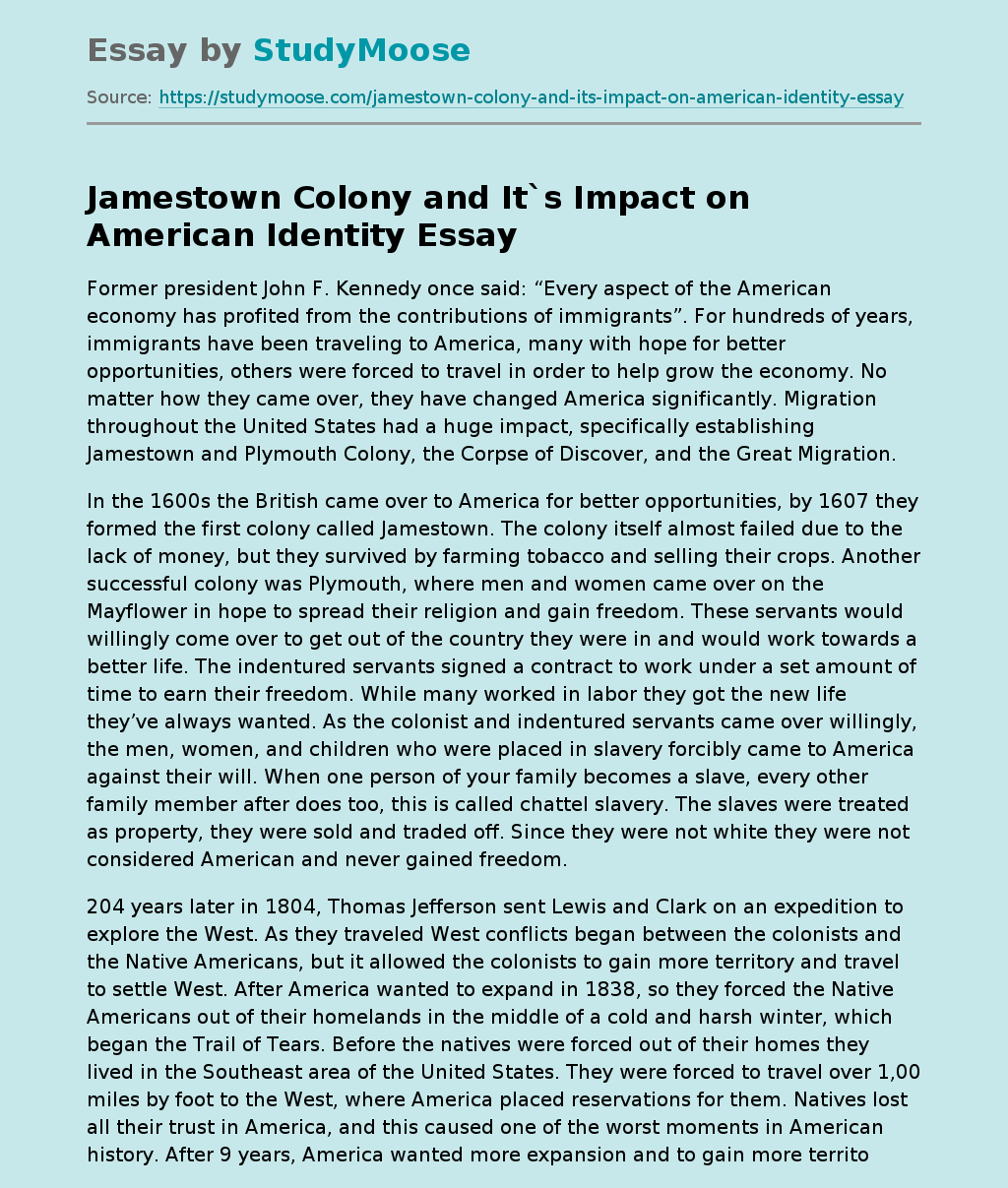