Since April 2003, iTunes Music Store has permitted the consumer to purchase music and digital books over the Internet with success. By 2005 their shares increase significantly as a result of their tremendous success. Their product became a platform for the digital music business to explode into the industry it is today. This also made digital music affordable to the consumer who may have gone to illegal downloads in the past which in turn ensured that the music industry was getting paid for their product as well.

Don't use plagiarized sources. Get your custom essay on
“ iTunes Music Store ”
Get custom paper
NEW! smart matching with writer

The $0.99 cents per song download provided $0.70 cents to be paid to the record companies and the remainder ($0.29 cents) was Apple profit. By August 2005, some of the larger record companies felt that their product was underpriced and requested that flexible prizes were instituted. However, this was not a shared opinion by all, the fear was that the market might not be stable enough to survive a price increase when illegal downloading was widespread. A price increase would encourage this type of activity to continue and no one would be making money.

Due to its power, Apple kept the same prices, however by January 2008, Amazon.com entered the market place with a similar product without all of the restrictions that were placed on music in the iTunes Store.

1)Provide an argument for why a variable pricing policy might increase the sales revenue from Apple’s Music Store (compared to the flat pricing policy). Life is complicated, but Apple Computer ‘s iTunes store is pretty simple: Download a song and pay and pay $0..

99 cents. In 2009, Apple announced that for the first time would allow beginning implementing variable pricing on the iTunes Music Store. Instead of a absolute $0.99 cent price point, record labels would now have the option to charge $1.29 for more popular songs and $0.69 for less popular tracks. It was not too long before almost every top song on iTunes jumped from $0.99 to $1.29. While most tracks that saw an increase in price suffered a small drop in sales, the $0.30 price difference more than made up for that fact, worked to increase overall revenues. Apples position during the time to increase the price of popular songs was global. Many of Apple’s products such as the iPod and laptops were sold all over the world. The iTunes Music Store was highly successful, and has already accomplished large user numbers. The change in price did not suggest a complete renovation in the way people downloaded and listened to their music. Also, Digital downloading of music is just one of the many markets that Apple has recruited into. Under a new pricing plan songs would cost depending on how desirable they are considered and having Apple such a market power, the new pricing strategy was another successful for the company.

2)Discuss other potential pricing policies that might increase the revenue from Music Store sales. With the increase in the demand for online-based music, Apple is likely to increase its prices to gain more from its products. The company cannot however enforce high prices on the consumers because the sale of online music is still in a changing stage. Apple could consider other pricing schemes like a bundle pricing where they combine popular and unpopular music or getting the latest popular music across genres. This could expand customer base to different genres and increase the sales of unpopular songs. The bundling strategy will help in increasing profits by extracting additional consumer surplus. They also could offer an entire group of songs, as a group, for a single price. The company could resort to sale of large music files such as MP3s, JPEG and MP4 and other music formats for various consumer needs (Brickley, Smith, & Zimmerman, 2009). 3)What are the risks and potential costs of implementing more sophisticated pricing schemes for the downloaded music? Sophisticated pricing tools are potentially available to provide a contrast to the uniform pricing model that used to implement iTunes. This sophisticated alternative tools may include song-specific pricing, pure bundling, mixed bundling, two-part tariffs among others that could be use to raise revenue. If firms have market power they can raise their prices without losing all customers to competitors. Firms have as ultimate objective to choose the pricing policy that boosts the value of the firm.

Managers are trying all the time to devise a pricing policy that captures as much gain as possible catching costumer surplus as company profit. For managers and companies in general, only incremental prices matter in pricing decisions. As this case show, iTunes has certain power on their loyal costumers and confronting the risk of some decreases on sales, iTunes took the risk when they increase their song’s prices and at the end, the most loyal costumers remained whit the company. The potential costs were evident when iTunes suffered at the first moments a fall in sales. Was very worrying that people were still able to download free music from other sites. Nevertheless, iTunes survived, and the company was still betting on iPods sales at the same time. 4)Is Apple’s pricing objective to maximize the revenue it receives from the sales of the downloaded music? Is this the objective of the major record companies? Explain. (Hint: review the revenue/product data from Apple’s 10-K) Apple as all companies is interested in maximize its revenues, but it not its objective reach it trough the downloaded music pricing strategies which is the objective of the record companies. Apple is a successful company that has a lot of attractive products that convert all the costumers in loyal fans of Apple. The Company is confronted by aggressive competition in all areas of its business; the markets for the Company’s products and services are highly competitive. The Company’s competitors who sell mobile devices and personal computers based on other operating systems have aggressively cut prices and lowered their product margins to gain or maintain market share. However, Apple is focused on expanding its market opportunities related to personal computers and mobile communication and media devices. The Company believes it offers superior innovation and integration of the entire solution including the hardware (iPhone and iPod), software (iTunes), online services (iCloud), and distribution of digital content and applications (iTunes Store). The Company’s ability to compete successfully depends heavily upon its ability to ensure a continual and timely flow of competitive products, services and technologies to the marketplace.

The Company continues to develop new technologies to enhance existing products and to expand the range of its product offerings through research and development. On the other hand record companies are just interested in gaining the greatest among of money from each company that distribute the music on which they have rights, they matter is to collet the most possible from every song downloaded. 5)Do you think that Apple’s ability to control the pricing of downloaded music is likely to change in the future? Explain. My personal opinion is that Apple has a huge recognition all around the world. Apple has been able to achieve its position with prodigious skills in the market. Nowadays, as we all know, Apple has the most loyal costumers in the world. Every single time that Apple launches a new product the most loyal costumers excited sleep for nights on the doors of the stores to be the first ones buying the new products that always offer the most cutting-edge advances in technology. I would say that Apple’s ability to control its prices related to downloaded music would not change too much in the next future. In deed, Apple has increasingly assumed the control of technological development in the industry. The Company is committed to bringing the best user experience to its customers through its innovative hardware, software and services. Apple is pioneered providing its customers new products and solutions with superior ease-of-use, seamless integration, and innovative design, every time getting closer to the wishes of consumers.

As part of its strategy, the Company continues to expand its platform for the discovery and delivery of third-party digital content and applications through the iTunes Store allowing customers to discover and download applications and books through either a Mac or Windows-based computer. The Company’s strategy also includes expanding its distribution network to effectively reach more customers and provide them with a high-quality sales and post-sales support experience. As a customer of Apple is very difficult to see that for the near future the company may lose its ability to control the prices of their products. When people become a fan of Apple never more would pay a similar price for another technology more than Apple offers. That is the reality today. 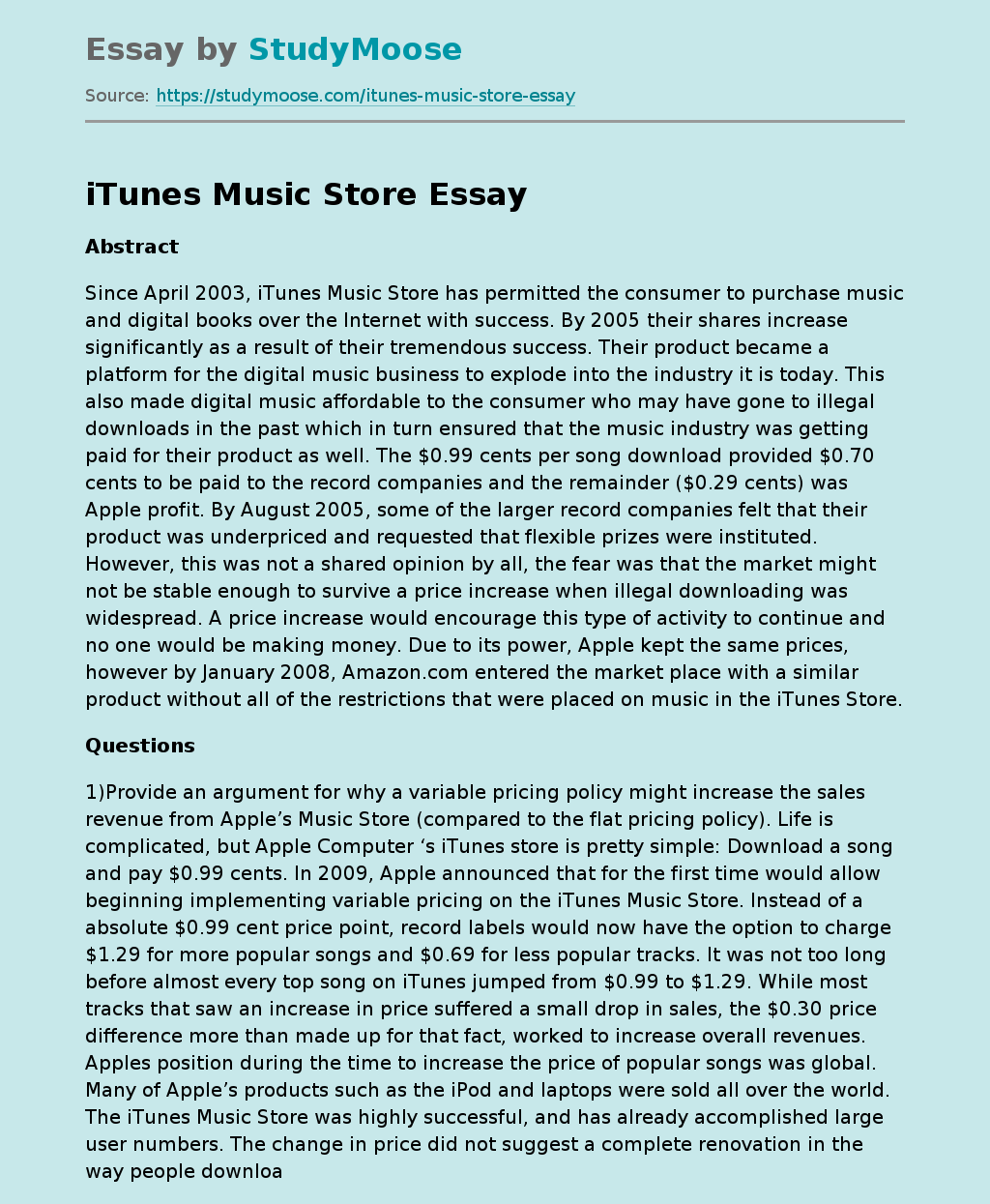