It's a Good Life vs Twilight Zone

After comparing the story “It’s A Good Life” by Jerome Bixby to the movie adaptation of Twilight Zone, I found many differences in each account. In Jerome Bixby’s version, Anthony is a 3 year old little boy. He has purple eyes, and is a creature with godlike powers. He can transform people and objects into anything that he wants, and he can read others minds. In this story, Anthony does not speak until the very end. Anthony plays with a rat during the story.

Don't use plagiarized sources. Get your custom essay on
“ It’s a Good Life vs Twilight Zone ”
Get custom paper
NEW! smart matching with writer

He is bored from playing with it, so he makes the rat eat itself.

At the end of the story, Anthony turned Dan into a creepy object and wishes him into the cornfield. In the Twilight Zone, Anthony is portrayed as a six year old little boy. He has blue eyes, instead of purple. He is a monster with godlike powers, also. He controls and destroys the things around him whenever he wants. Anthony speaks throughout the entire screen version.

He creates a three-headed animal that he plays with during the Twilight Zone. At the end of the episode, Anthony turns Dan into a jack-in-the-box.

Some structural differences between the two accounts is the dialogue of Anthony. In the story, he does not speak until the very end. In Twilight Zone, he talks throughout the entire episode. The screen version of “It’s A Good Life” is more effective. It keeps the audience’s attention, and it is more appealing. The story version does not hold the audience’s attention throughout the entire story.

It's a Good Life vs Twilight Zone. (2017, Mar 01). Retrieved from https://studymoose.com/its-a-good-life-vs-twilight-zone-essay 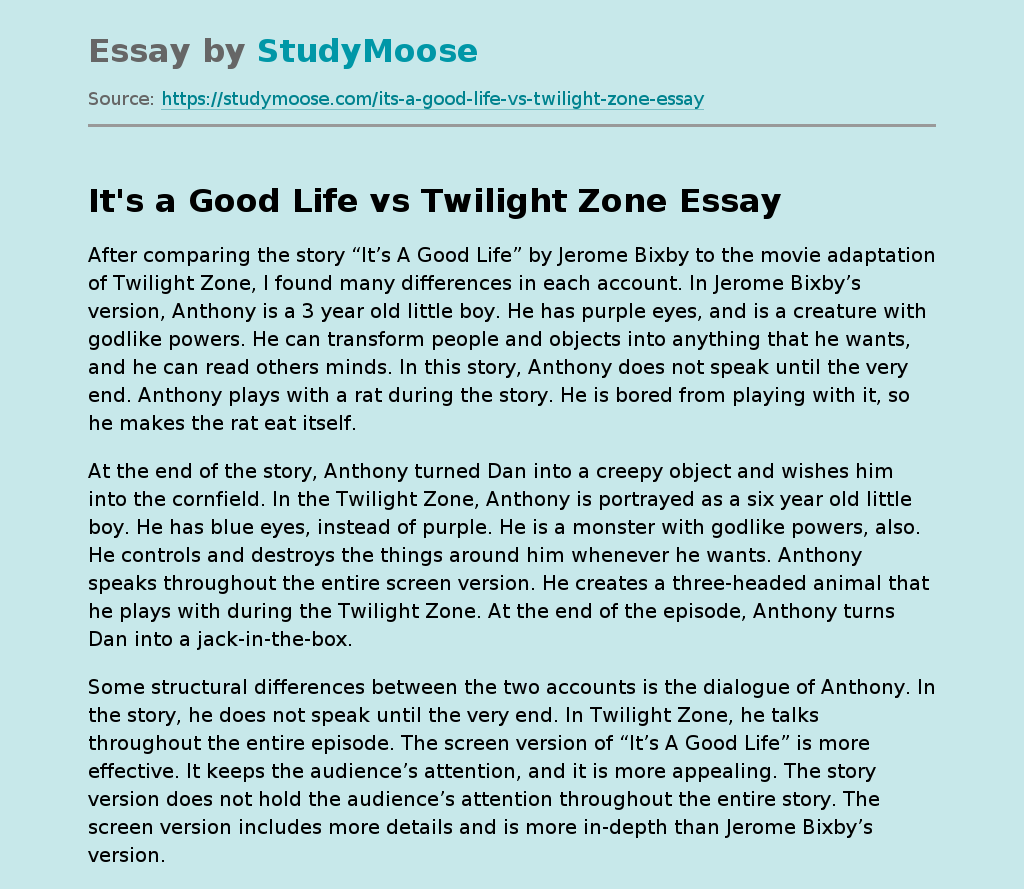