Neutrality, in international law is a policy that adheres to the non-engagement in wars.

Get a verified writer to help you with Isolationism Vs Internationalism

The first doctrine of Neutrality was issued by George Washington. However, this rule of neutrality was viewed with two “deceptive” assumptions as being neither a judge nor party in conflicts which doesn’t employ biased opinions; and that belligerents do not respect sovereignty of neutral states. However, the role of neutralism broke down at the event of the two world wars, which reflected the changes of interdependence among the states.

Aside from economic targets, military targets also covered every nation, thus rejecting the tenets of neutrality at hand.

Moreover, World Wars has underpinned isolationism by the end of nineteenth century. America’s isolationism broke down in the twentieth century when they started entering into treaties to strengthen commercial supremacy. The Spanish American War pushed US to acquire alliances and commitments in the Far East and the Caribbean. Following this course, isolationists in the US have started to decline its power and influence, when the US government started supporting their Allies amidst the First World War (Jonas, 1966).

After the World War I, US, under the regime of Woodrow Wilson entered the League of Nations. Entry to the League of Nations is a means of entry towards collective security, thus challenging the political position of isolationists. The League served as bridge for international alliance – arbiter for territorial disputes brought by the war, and served as international police to avoid another war breakout. Though the League failed in containing the Second World War and was finally disbanded in 1946, it brought about the birth of United Nations in the international scene.

That by 1930s, internationalism has finally reached America, rooted from their goal to contain rising dictatorships in the global arena. The interval between the two world wars developed a sense of “commitment” among the American government to world law, collective security and a sense of policing the international arena, thus forming internationalism. Rise of Internationalism The Great Depression in America has caused people to be more concerned in reviving the economy. And as if seeing another war performance could bring in dictatorship in US, citizens still favored isolationism.

Though, the Depression still has pushed countries particularly US and Britain together to boost their withering economies. The Japanese militarism gave them opportunities to commit aggressions in the South East Asia, uniting with Germany and Italy. Japan also signed a neutrality pact with the USSR to protect its borders. The continuing aggressions of Japanese military and government, and pursuing of certain territories created hostilities between Japan and United States, which led to American oil embargoes.

American protectionism in Eastern Asia had caused further friction with Japan. Japanese attack on the Pearl Harbor, marked the end of classic isolationism in US. The simultaneous Japanese attacks against US allies intensified and prompted both sides to form alliances against each other. When US became a member of the United Nations, and the America First Committee was broken up. It followed that US also agreed to engage in the military alliance, North Atlantic Treaty Organization. And in 1950s and 1960s, US intervened in wars against the Koreans and Vietnamese, respectively.

The US emergence as superpower after the Second World War, marked the start of internationalism. The war and downfall of France, prompted American president Roosevelt to become more linked towards other countries by sending aids to the Allied powers. US became more and more involved in foreign relations, as they were active participant for the NATO, and they instigated the Marshall Plan. Their efforts to contain the spread of communism has gotten them more indulged in global expansion. (Cole, 1983). The Post World War and the Nazis

The effects of the World War 1 prompted the rise of Hitler into power and lead the Nationalist Socialist Party in Germany. This reorganization in the German government was a direct opposition to the rising internationalism trend set by the United States. As the Nazi government has changed their policies from the old Bolshevik ways towards centralization of power and hierarchal constitution. At the brink of 1930s totalitarian control of the state was employed and leadership of the government were attributed to loyal Nazis and pure German bloods.

Hitler eliminated all liberal democratic opponents in the government as a policy of his reorganization of the German Society, thus promoting centralization of the State. The effects of Nazism in the international order is employed in the remilitarization of the Rhine Island, formation of the Italo-German Fascist Axis that opposed the US led alliance, intervention into the Spanish Civil War, non aggression pact with the Soviet and the invasion of Poland which resulted in the outbreak of the Second World War.

Get a verified writer to help you with Isolationism Vs Internationalism 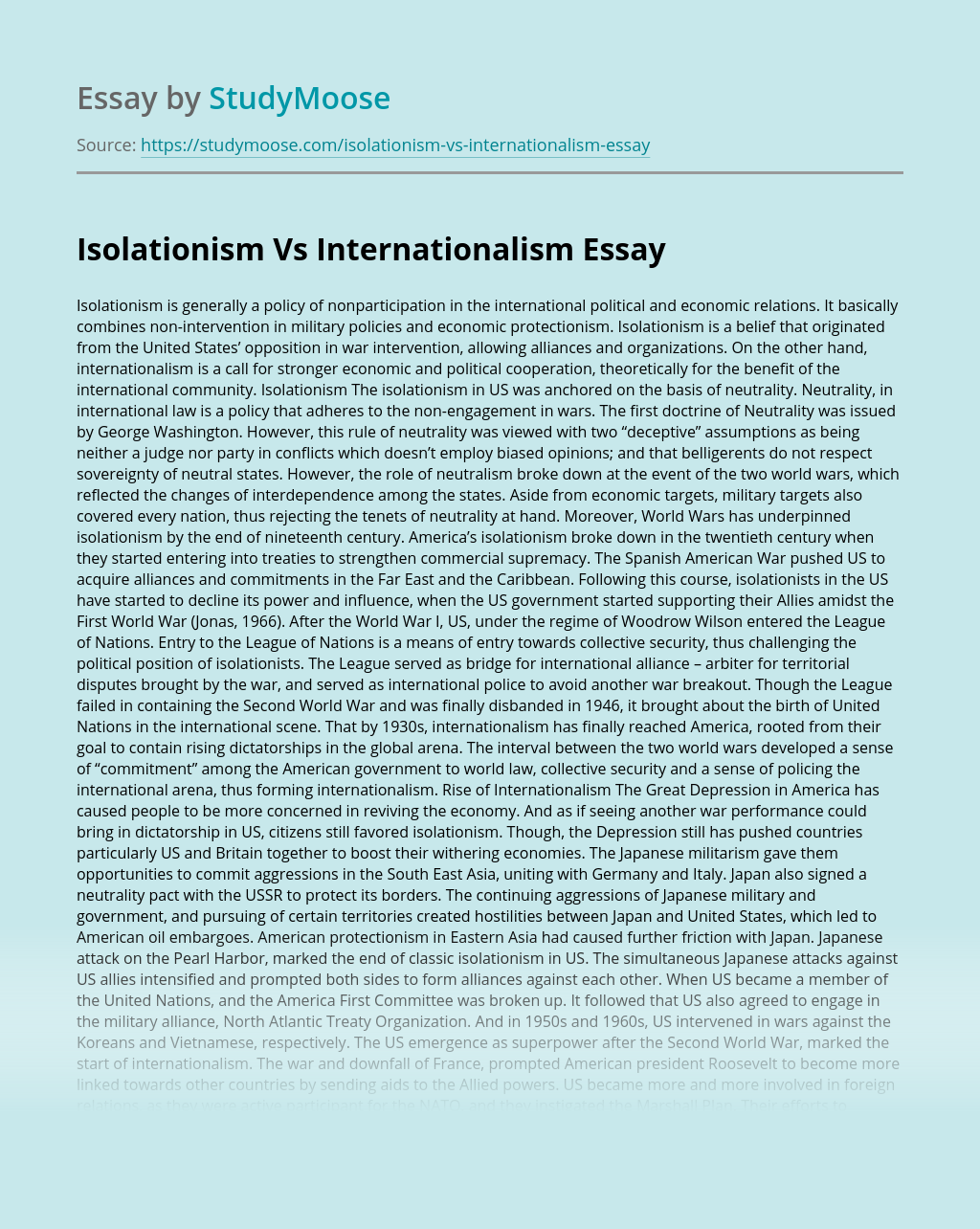 There have been so many novels recently drawing on or purporting to draw on memories of a childhood under apartheid that we may be inclined to assume that this kind of inverse nostalgia is a peculiarly South African phenomenon. Even Barbara Trapido, who has lived most of her adult life in England, has chosen to...

Get Essay
Comparaison Between MCMXIV and Anthem for Doomed Youth

In both of these poems Anthem For Doomed Youth and MCMXIV talking about war, Wilfred Owen and Philip Larkin try in different ways to engrave in their readers minds the atrocious actions that war provoked with different language, voice but also form. First of all, the poems are written in a different way. Anthem For...

"The Destructors" by Graham Greene: Characters

In “The Destructors” Graham Greene uses Trevor and other characters as an example to assert that the war and the bombing that injured British cities during the war was causing people surrounded by the destruction to become desensitized. Blackie and the other members of the gang all distrust Old Misery’s exhibitions of generosity and so...

The Treatment of Shell Shock Victims

Thesis Statement Shell shock is an epidemic that affects men during wartime and the treatment of shell shock victims varies widely; ranging from the use of disciplinary approach or practices up to the use of technological advancements such as the electro-shock treatment. Shell Shock refers to the psychological trauma caused by war to men. This...

The poem ‘Tears’ by Edward Tomas was written in January 1915. This was a time when he had to make a serious decision about subscribing to the front line or not. This poem is typical of Thomas at this time and he tends to describe the beauty of the natural world, but there always a...

Firstly what was Appeasement? This was the name given to the policy of trying to avoid war by making allowances and sacrifices. It is particularly connected and identified with the British policy towards Hitler in the 1930s to attempt and avoid the Second World War. As we now know this didn’t work although it did...

The Ghost Road by Par Barker

Throughout the book “The Ghost Road” by Par Barker, we follow the main character Billy Prior through a series of events. Billy Prior is a young soldier who was fighting in World War I for England, who is also trying to figure out his own sexuality. Through most of the story, we are going and...