Is Society Too Dependent On Electronic Gadgets

As a result of day-to-day improvement in Technology our views of life on Earth, of ourselves as individuals and of the Universe have drastically changed. Modern technology depends on advances in pure science. Scientific developments make opportunities for satisfying needs and desires of the people and for making their life easier. Modern gadgets have completely changed the human life and health to a higher extent. In fact the machines have become like servants without which life becomes difficult. Thus we can say that our dependence on modern gadgets has made us slaves to machines and we have lost sprit to work and vitality, vigor and stamina and therefore no more good health , cheerfulness and endurance.

Don't use plagiarized sources. Get your custom essay on
“ Is Society Too Dependent On Electronic Gadgets ”
Get custom paper
NEW! smart matching with writer

This all has resulted an increase in anger, irritation, tensions and anxiety. As a result, human nature is now short-sighted in human values and aspects. [dependence from gadgets, wells ball].

Nearly 65% of Americans think that today’s society is too dependent on electronic gadgets, and 39% do not think technology( such as mobile phones , Wi-Fi networks and GPS) really makes people more productive, according to recent Harris Poll from Harris Interactive.

Proficient in: Life Without Electronic Gadgets

Almost 73% of Americans believe that investing in innovations and advanced technology sciences in education is the most important to the country’s long term success. 71% Americans say technological leader ship role in the technologies could mean survival for the US automobile industry. Seven in ten adults (71%) suggest that travel costs for business can be reduced if technology such as video conferencing were better used.

A survey held by Harris Interactive about the advanced technology entering into the market or will be introduced in the near future. It found the following:

However, overdependence on technology is also a reason people stop being able to function without them. Even simple calculations won’t be simple anymore without calculators.

On the bases of a 2013 British study, 51 percent of surveyed individuals admitted to suffering from “extreme tech anxiety” when the users are separated from their devices such as smartphones or tablets. Around 56 percent of all Americans own a smart phone, the Pew research centre says. According to Consumer Habits study , people use smartphones at showers (12 percent ), at the movies (35 percent ) and even while driving( 55 percent ). When the New York Times covered the topic in 2010, the reporter interviewed Dr. Elias Aboujaoude, a psychiatrist and the author of Virtually You: The Dangerous Powers of the E – Personality, he believes that we’re paying a price in terms of our cognitive life because of this virtual lifestyle. Few studies suggest that excessive dependence on smartphones and the Internet is akin to addiction.

At present, a name is given for the fear of being without your phone: “nomophobia”(i.e., no mobile phone). Pools suggest that women are slightly more who suffer from this separation anxiety: SecurEnvoy reports 70 percent of women and 61 percent of men experience these symptoms. It’s important to keep in mind that these are not considered as classic phobias and aren’t in the American Psychiatric Association’s Diagnostic and Statistical Manual of mental Disorders (DSM-V), but this may change. According to the article “ Psychological Predictors of Problem Mobile Phone use,” psychological factors are involved in the excessive use of mobile phones and other devices. These include low self-esteem, impulsiveness and highly extroverted or introverted personality. Dependence on Technology can also raise the symptoms of preexisting disorders such as social phobia, social anxiety, or panic disorder. One study reported that the stress levels associated with nomophobia are similar to those of “ wedding day nervousness ” and trips to the dentist.

Continuous use of gadgets or electronic devices encourages a sedentary lifestyle and may lead to poor posture and weight gain. In the worst cases, this may lead to obesity, neck and back issues and wrist and hand pain. Also the backlit screen on computers, Iphones and videos can cause eye problems( increased sight ) and headaches, and put users at greater risks of macular degeneration, which is the primary cause for blindness.

Using electronic gadgets like TV, smartphones, tablet, laptops,etc. late at night may interfere with student’s sleep patterns. The artificial blue light produced by electronic devices suppresses the release of the sleep-inducing hormone melatonin, which delays the body’s internal clock and makes falling asleep more difficult. Students who find it difficult to switch off their electronic devices may delay their bed time, which decreases the amount of REM sleep(the restorative part of the sleep cycle ), which makes them less alert in class the following day.

As marriage and family therapist Sharon Gilchrest O’Neill tells in an interview with Cult of Mac, when we are continuously working and anticipating on a technological interaction – a phone call, text, email or social media notification – our bodies and brains respond in such a way that it registers as anxiety. In brief, smartphones and other devices create a waiting game environment.

The researcher believes that people nowadays became too lazy and don’t come outside often to explore their surroundings, because users may use their smartphones and other technologies to avoid feelings such as discomfort and stress. People don’t even move out for shopping as we are having so many online shopping websites. According to Silviya Dineva, the number of online buyers is expected to be 13-25 % worldwide, reaching nearly $1.6 trillion in 2016 and almost $2.5 trillion by the end of 2018.

Even if there are serious cases of nomophobia and technology dependence that require professional medical or behavioral health interventions, there are ways to reduce the reliance on technology, the following are tips for maintaining a balance between our lives and the digital world.

Is Society Too Dependent On Electronic Gadgets. (2021, Mar 04). Retrieved from http://studymoose.com/is-society-too-dependent-on-electronic-gadgets-essay 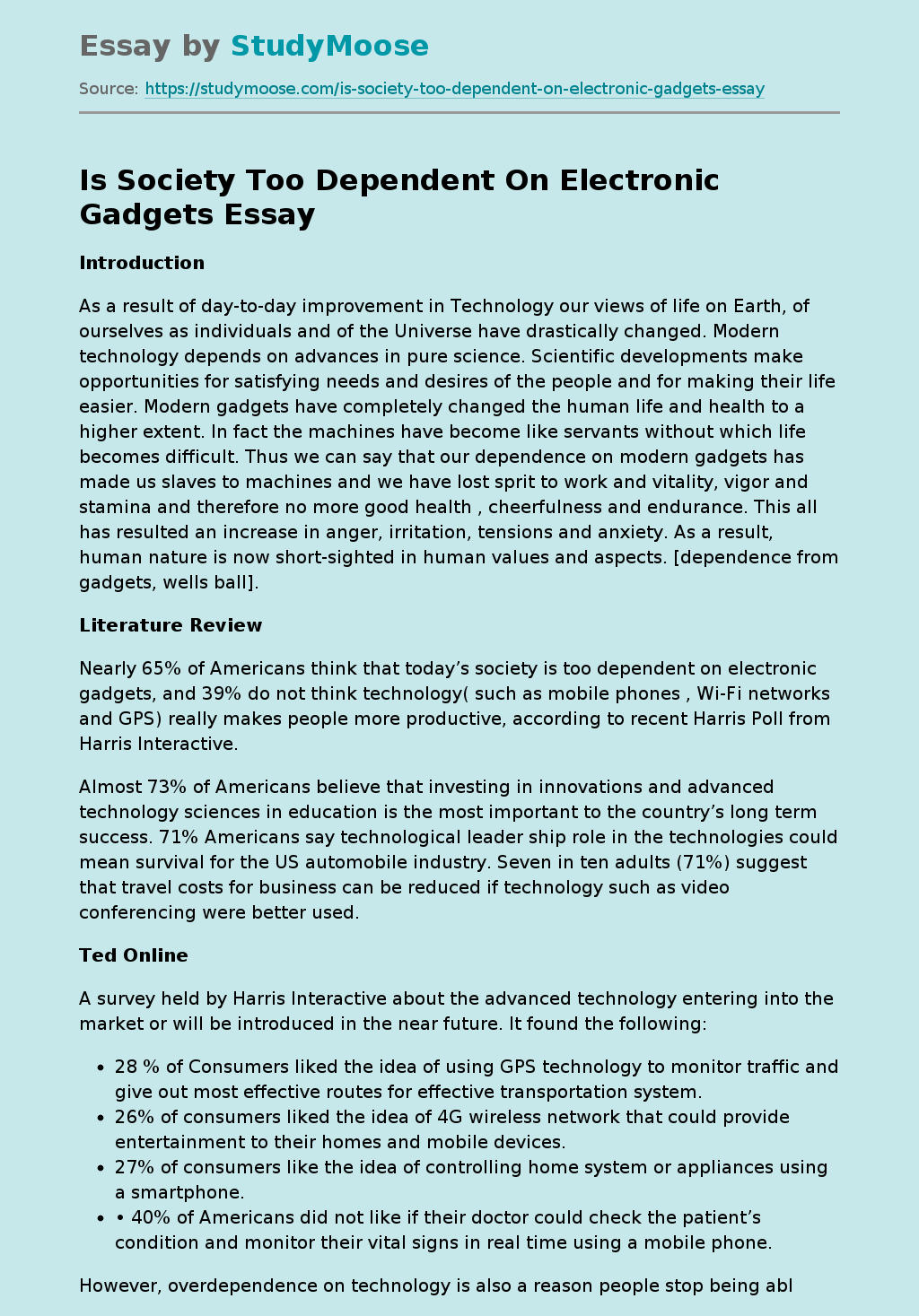