"Is Racism a Permanent Feature of American Society?”

The situation dealing with racism became alive at the start of slavery. The whites controlled the blacks years ago and today in some parts of America it is still happening. Racism had split today’s society into two parts. One side is the blacks and the other side is the whites. If you are not African American or Caucasian, then whatever the color of your skin is, that determined what side you was placed on. Some say that in the twenty-first century, racism is still in Americans Society.

Don't use plagiarized sources. Get your custom essay on
“ “Is Racism a Permanent Feature of American Society?” ”
Get custom paper
NEW! smart matching with writer

Those people are totally right, but the question is will racism be a permanent feature of Americans society. After reading Dinesh D’Souza’s response to the previous question, there is more than enough evidence to say that racism will not be a permanent feature in America’s society. Black people do crime and white people see it on television. White people do everything and anything that they can to keep blacks out of sight.

Proficient in: Racism In America

If that’s following a black man around the store, or not hiring any black people to work for the whites, but a white person is always going to think twice about associating with blacks.

A black man walks into a shoe and he is followed all around the store by a white man. The white man is not too close the black man but he is close enough that the black man knows that he is getting followed. All the way until the black man gets to the register and pays for his items.

Then the white man says to the black man, “Have a nice day and come back soon.” The first thing that this black man thinks is that the white man was a racists person. But he was unaware about the other black man that came in before him that stole five pairs of shoes, and just walked right out the front door without paying.

The only reason the white man was following the black man was because he did not want to get robbed again. The black man did not know that, so that’s why he felt as though the white man was racists. All whites are not racist but it’s just the bad things that some blacks do that hurt the whole race. A black lady comes to an interview to be a greeter at a restaurant. She has all the certification and experience that is need for the job.

She answered all the questions correctly and gave great reasons why she should be hired. But for some reason she does not get the job and they tell her that she needs more work before they hire her. She feels that the company is being racist because she is a black woman. What she doesn’t know is that a black women before her got that same position and almost got their business shut down. The company made an agreement that no more black would be allowed to work in that company. The black women had everything that she need for the job but because of the black lady before, she was not hired.

That is another example of how some black people mess things up for the whole race and because of that blacks call white people racist. Derrick Bell believes that because the whites are in control of the education, they make it too hard for blacks to pass. Well black families are way different than white families, and they also have different beliefs. Some white families push their kids to do good and set high standards for them to reach. On the other hand, some black families just make sure their kids are making average grades and they are not being bad in school.

That does not have anything to do with any kind of racism. According to D’Souza it is just as excuses to not have to deal with the situation. To sum it up, racism is not a permanent feature of American society. Some blacks will tell you that it is but, those are the same blacks that make it hard for white people to trust them. Racism was very big at some point but after it died down, it all came to what race was going to rise to the top. The whites did their job and now because of they have biggest business in the United States. Black people are not determined to do a lot of different things.

They just want everything to fall in their laps or they want someone else to do things they want for them. If some people didn’t mess it up for the whole race then we could be at the top of businesses and have our faces on build boards, but that chance was messed up long time ago. Racism does not have to continue in today’s society.

"Is Racism a Permanent Feature of American Society?”. (2016, Apr 15). Retrieved from https://studymoose.com/is-racism-a-permanent-feature-of-american-society-essay 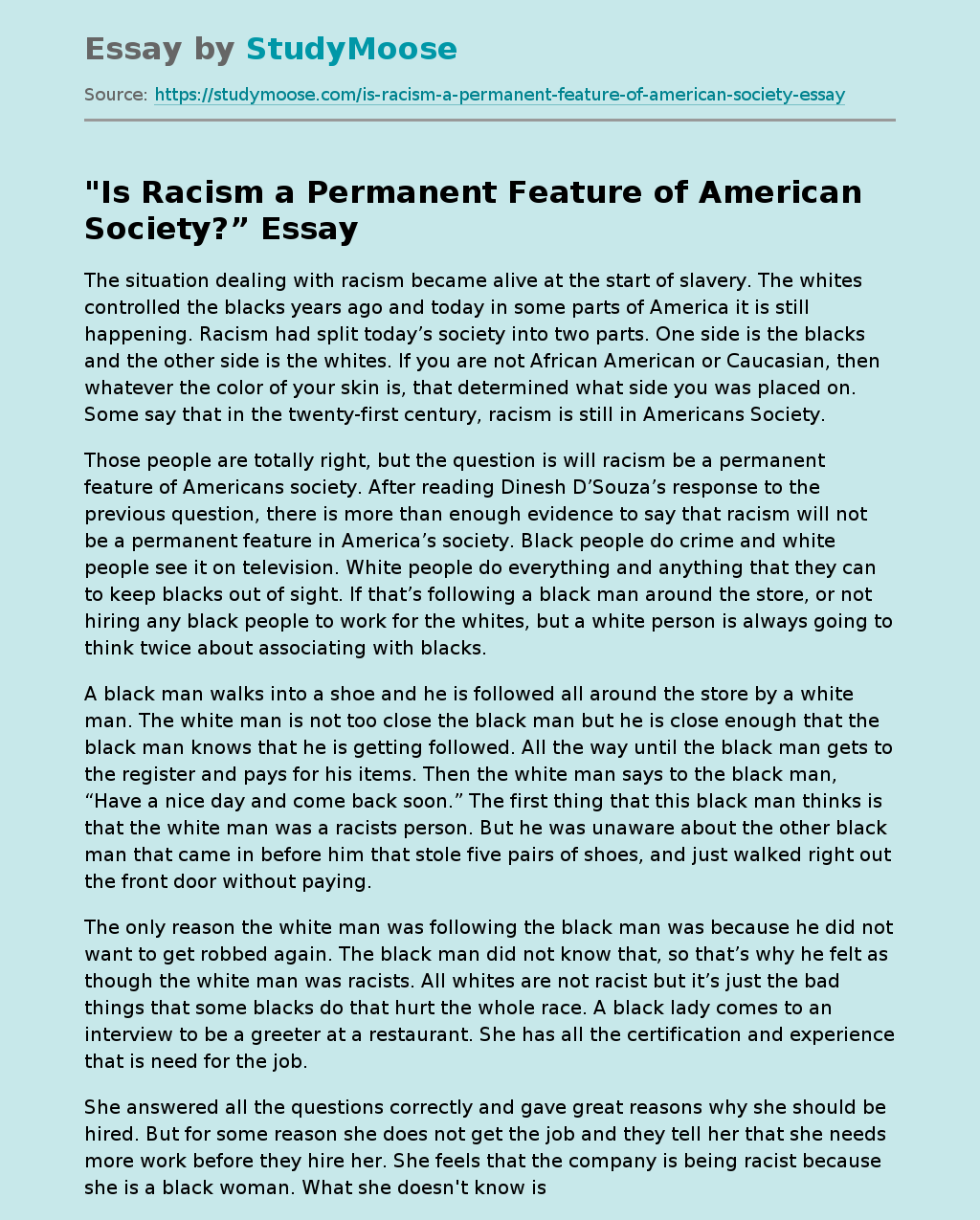