President Andrew Jackson left a permanent mark on the country of America that reaches out way further then his face just being on the twenty-dollar bill. He was born and raised in rural South Carolina and the things that he seen and went through during that revolutionary period as a courier shaped his presidency and the policies that would soon come about. He was the reason for many of the things that we see in the government today like the double party system, which he brought together by splitting what was then known as the Republican Party into the Whig and Democratic party.

Don't use plagiarized sources. Get your custom essay on
“ President Andrew Jackson left a permanent mark on the country of America ”
Get custom paper
NEW! smart matching with writer

He became a war hero after winning the Battle of New Orleans against the British and destroyed the second national bank of America. You can just say he was a man of the people and someone that had a huge following and support from his people. When Jackson came into office there were already preexisting tariffs and legislations that had been in place.

One of those tariffs aided business and domestic transportation which raised the prices of manufactured goods as it also became problematic in this aspect for the distribution of foreign goods to America. This tariff only appeared to be disliked by the South because the North already had a strong industrial standing. So, the South felt that the reasoning behind this was to continue to make the North stronger at the cost of the South. John Calhoun who was then the Vice President shared a similar background as President Jackson and had an early on career as a war hawk and a nationalist.

He brought to Jackson’s attention that throughout the 1820s, South Carolina went through an agricultural recession causing almost a significant amount of people to emigrate. As time would pass, they knew the population would continue to decrease. By the 1830s double of that amount people would have emigrated due to this lack of necessities we needed but couldn’t fulfill during that depressional time period. So, what or who did the people start blaming for this tragedy? The tariffs that were in place. Then as this was taking place the North started with the criticism of slavery. So, they decided that a nullification would be a way to prevent an outbreak of rebellion and severance. They saw that it could only be two outcomes which were that the government would have to let go of the law or to get an amendment put in place that would remove any possibility of the legislation’s rationality. The Bank Crisis in 1833 started by Jackson was campaign that was started to destroy the Second Bank of America. After he had gotten reelected, he knew he had national support towards the problems he felt the national bank brought. In 1832, a year before, he vetoed a billing stating an action to get the second banks charter renewed. To stop that from happening, he set forward to decrease the economic power of the bank. After going against literally half the committee and cabinet members, on October 1st, 1833, he announced that their will no longer be federal funds deposited into those banks. He felt that is was in everyone’s best interest to just place the money in several pet banks to where at the end twenty-three banks were being use for federal money. Nicholas Biddle was the bank president at the time and could not disagree more with what Jackson was doing. He thought that a financial crisis would be what needed to happen for people to see that we need a national bank. He did this by sending bank notes to the states banks that were being used by Jackson for redemption against him. By 1836, the charter expired and none of the funds were deposited back into the Second Bank meaning he basically won the war. From the beginning of days, a relationship between White and Indian settlers who have always had problems over the agriculture and just the resources that area obtained that could benefit them. This idea of the Indian Removal Act was tossed from president to president to president and it wasn’t until Jackson became president it became an official policy. As the new 19th century came to start, there were Americans who were land hungry and they moved inward towards what’s know Mississippi and Alabama. But apparently, they couldn’t live a normal life with Indians as their neighbors, so they asked the federal government to do something about it and finally remove them once and for all. Presidents like Jefferson and Monroe felt that the tribes that were there should have the option to exchange their land for land west of the Mississippi River. Jackson set forward an expedition towards the creek Indians calling it the Battle of Horse Shoe Bend. He savagely destroyed their Creeks and any military existence and power they had. Then they were forcibly made back down and give up what was theirs to America. In total they surrendered twenty-two million acres of land and that wasn’t all they surrendered going through this Removal Act. They went through many hardships on what they labeled the Trail of Tears which included five Indian tribes. Each group had different failures and success through out this some caused war and then some just left and settled in new Indian territories. Throughout Andrew Jackson presidency he defended the United States through everything. Countries around the world found respect for the U.S. after how Jackson handled everything involving foreign affairs. He left the White House in 1837, and due to many infections and different visual and hearing problems he passed away in 1845. Even after his death his legacy lived on and people still call him the people president.

President Andrew Jackson left a permanent mark on the country of America. (2019, Aug 20). Retrieved from https://studymoose.com/president-andrew-jackson-left-a-permanent-mark-on-the-country-of-america-essay 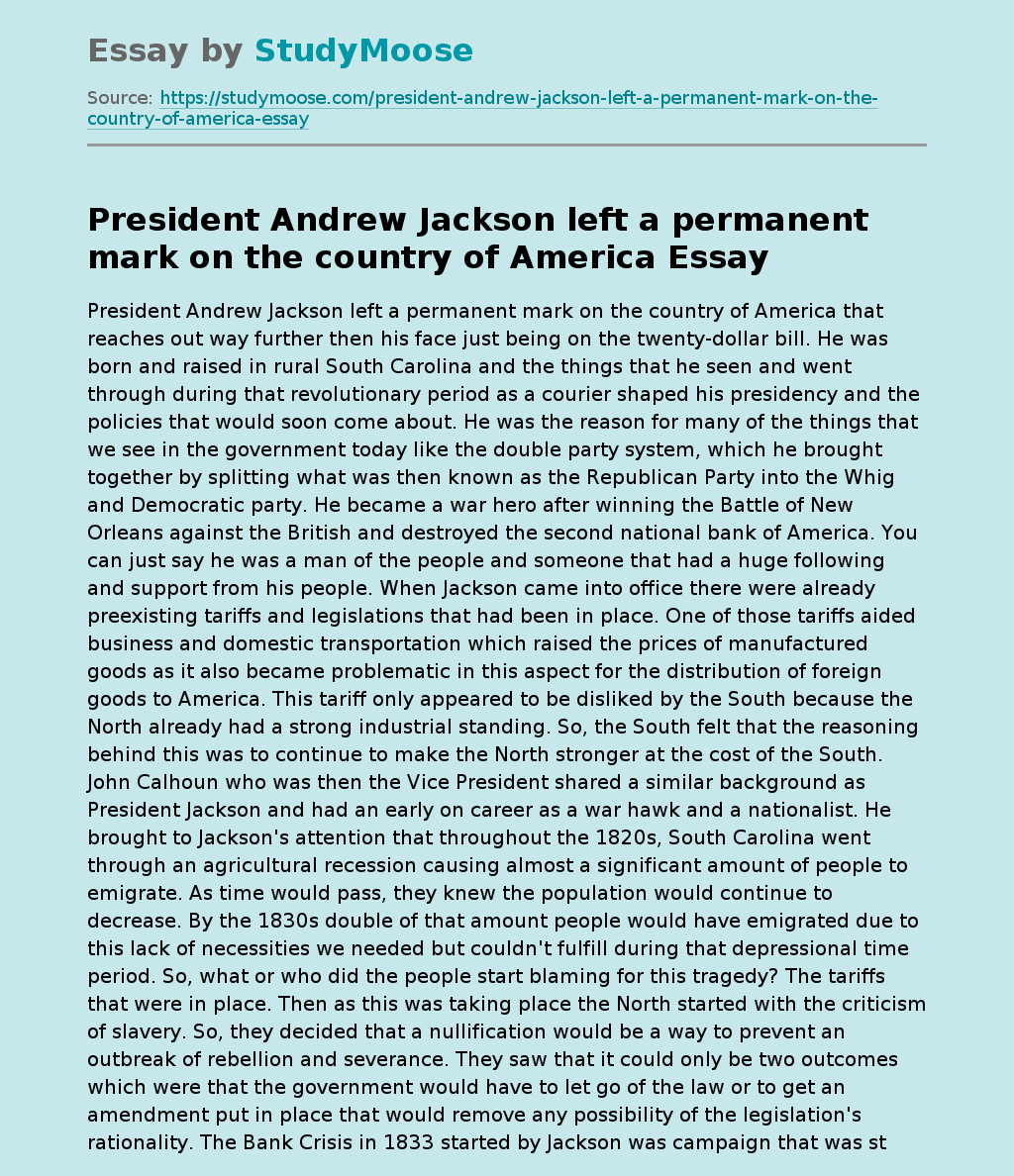