Investigation on finding the Molar Mass of Butane

Butane (C4H10), also called n-butane, is the unbranched alkane with four carbon atoms, CH3CH2CH2CH3. Its only other isomer is methylpropane: CH(CH3)3. It is an organic compound which belongs to the alkane group or organic compounds. It is a highly flammable, colourless and odorless gas at r.

Don't use plagiarized sources. Get your custom essay on
“ Investigation on finding the Molar Mass of Butane ”
Get custom paper
NEW! smart matching with writer

In the experiment we shall find the mass of butane by calculating the change in mass of the lighter before and after the experiment. We shall find the number of moles in the container by finding the volume, pressure and temperature of butane inside the container, and then use the formula PV = nRT (where P: Absolute Pressure measured in millibars, V: Volume of gas measured in dm3,T: absolute temperature in Kelvin, and R is the universal gas constant, which equals to 83.

I feel that the mass of one mole of butane will be approximately 58, as this is the RMM of Butane (correct to 0 d.p.).

In the experiment, when we opened the nozzle of the lighter, butane escaped from the lighter, causing a decrease in mass of the butane inside the lighter. The butane rose to the top of the burette, since butane is less dense than water. This caused the pressure at the top of the butane to be greater than the atmospheric pressure. Since liquids are mostly incompressible, the increase pressure at the top, created a force on the top of the water column, pushing it down. Hence the volume of gas (butane and vapour) inside the burette would increase, causing the pressure of gas to decrease until it is equal to the atmospheric pressure. This process kept on occuring as more and more bubbles of butane and moisture reached the top, hence at the end of each trial the pressure inside the burrrete can be estimated to be equal to the atmospheric pressure.

From the graph, it has been calculated that the RMM of butane is 53.946ï¿½60.2% using the formulae ‘RMM = mass/n’ and ‘pV= nRT’. There are no anomalies, since the graph passes through the error bars of all 4 points.

In the experiment, the accuracy is fairly high as the experimental value for the RMM of butane is 54, while in theory it is 58.12 (percentage error of only 7.089%), which shows that very few systematic error occured during the experiment. This is also shown by the fact that the y-intercept is 0.0125, which is very close to 0, showing an almost completely proportional relationship between mass and n.

Regarding the precision of error, the margin of error has been calculated as 60.2% and is far to high, resulting in a poor precision. However the experiment was more precise than this value of 60.2% shows it to be, because from the graph one can see that all the points lie close to the line of best fit.

In the experiment, various errors could have occured, such as:

To reduce the margin of error we could have:

Investigation on finding the Molar Mass of Butane. (2017, Nov 17). Retrieved from https://studymoose.com/investigation-on-finding-the-molar-mass-of-butane-essay 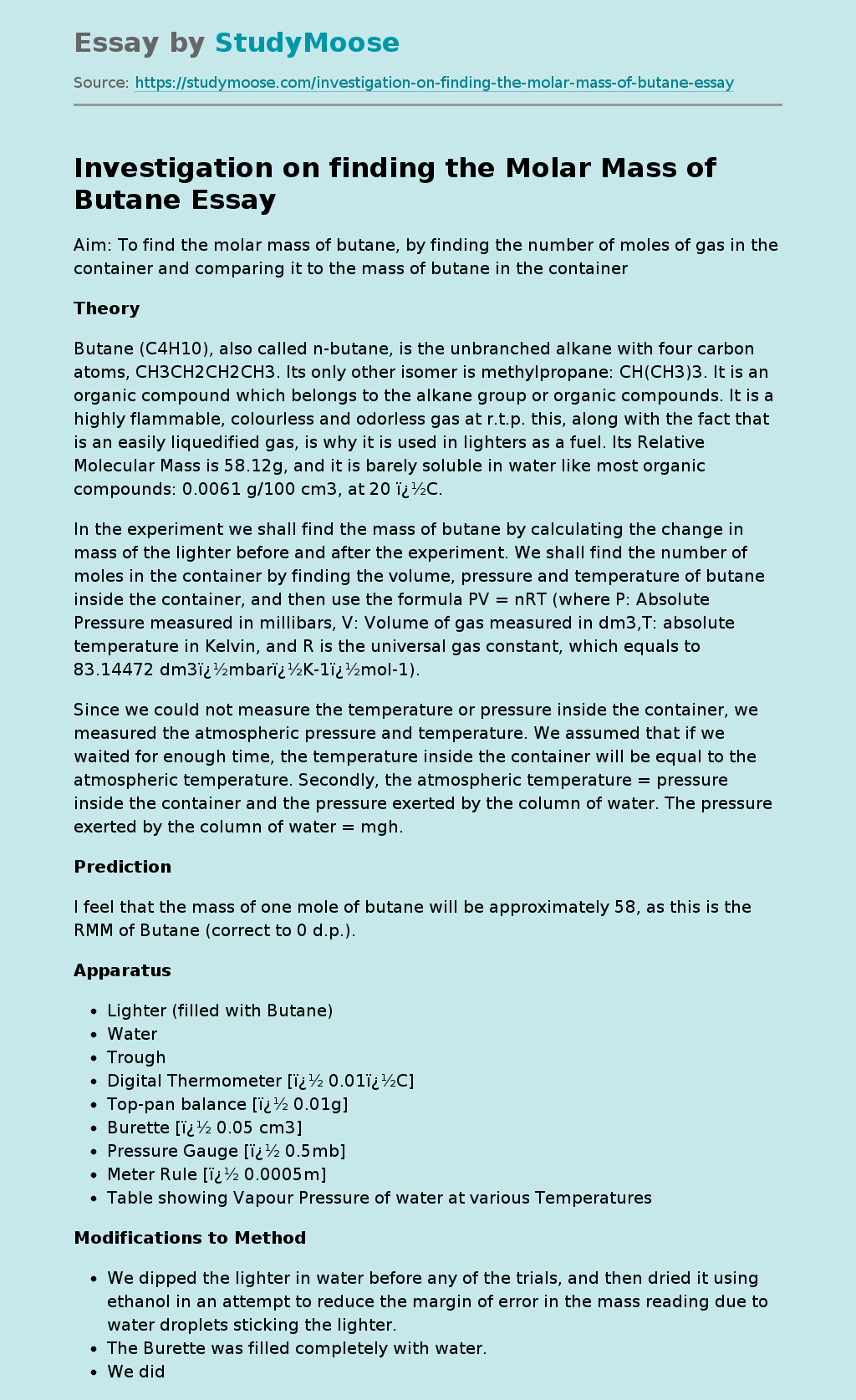