In century 15th-19th, there was 38 empires had reigned their dynasty in Angkor. 11th-13th century, the reign of Angkor reached the peak. Presumably, there was a huge population lived in Angkor at the time. Also, the international trades were in process, especially with the China. The success of Angkor is due to the well-connected water system. Well maintain system had provided the Khmer basely living needed, enable them to live health. But then, as it was very peak, the reign started shake.

Don't use plagiarized sources. Get your custom essay on
“ Introduction to Angkor Wat ”
Get custom paper
NEW! smart matching with writer

One of the factors caused the empire crumble is war involvement with their neighbors, Vietnam and Siam. The domestic instability caused this glorious city gradually abandoned to the jungle. After 400 years, the sites were discovered surprisingly and now it was listed as the world heritage site. Angkor Wat Angkor Wat is the mother of all temples in Angkor. It is located at 6km from Siem Reap in Cambodia, which built with intricate lotus-blossom towers and surrounded by perfectly square moats and reservoirs.

It was constructed by king Survayaman II in the beginning of 12th century. Angkor’ means city in the Sanskrit word and the ‘Wat’ which means temple in Khmer. A classical architecture, Angkor Wat is the largest religious structure in the world. It was built by a very large number of sandstone and laterite as building materials and took to build 35 years. According to inscriptions, the construction of Angkor Wat involved 300,000 workers and 6000 elephants. The inner walls of the outer gallery bear a series of large-scale scenes, with fascinating carving, depicting Hindu epics, stories and lifestyle of inhabitants and also historical war of empires.

These exquisite apsaras (nymphs) were damaged during Indian efforts to clean the temples with chemicals during the 1980s. The Khmer empire’s strength was based on a well-developed system of irrigated rice cultivation. The irrigation system provides the economic infrastructure for the successive Khmer inhabitants. In year 1860, Angkor Wat was accidentally found by a French explorer, Henri Mouhot. A gigantic and magnificent stone temple as remained about nine hundred years old had been brought the attention.

It is larger than any monuments of historical building, and is the greatest structure ever in the world. West is the direction of death, which once led a large number of scholars to conclude that Angkor Wat must have existed primarily as a tomb. The temple was dedicated Hindu god Vishnu and commonly accepted that the temple is funerary tomb of King of Survayaman II. In the late of 13th century, Angkor Wat gradually presented from Hindu to Theravada Buddhist.

The appearance of Angkor Wat had attracted archeologist, scholars and explorers for exploring and they are actively to restore the history of Angkor Wat. The sculptures had become important clues for researcher to reveal the origin of Angkor Wat. The restoration work was interrupted during 1970s-1980s by the civil war. Angkor Wat is a source of great national pride to Cambodian. It has become a symbol of Cambodia, which appear on the flag of it. Besides, it has potentially become a tourism destination in order to sustain the living of natives and reduce poverty. 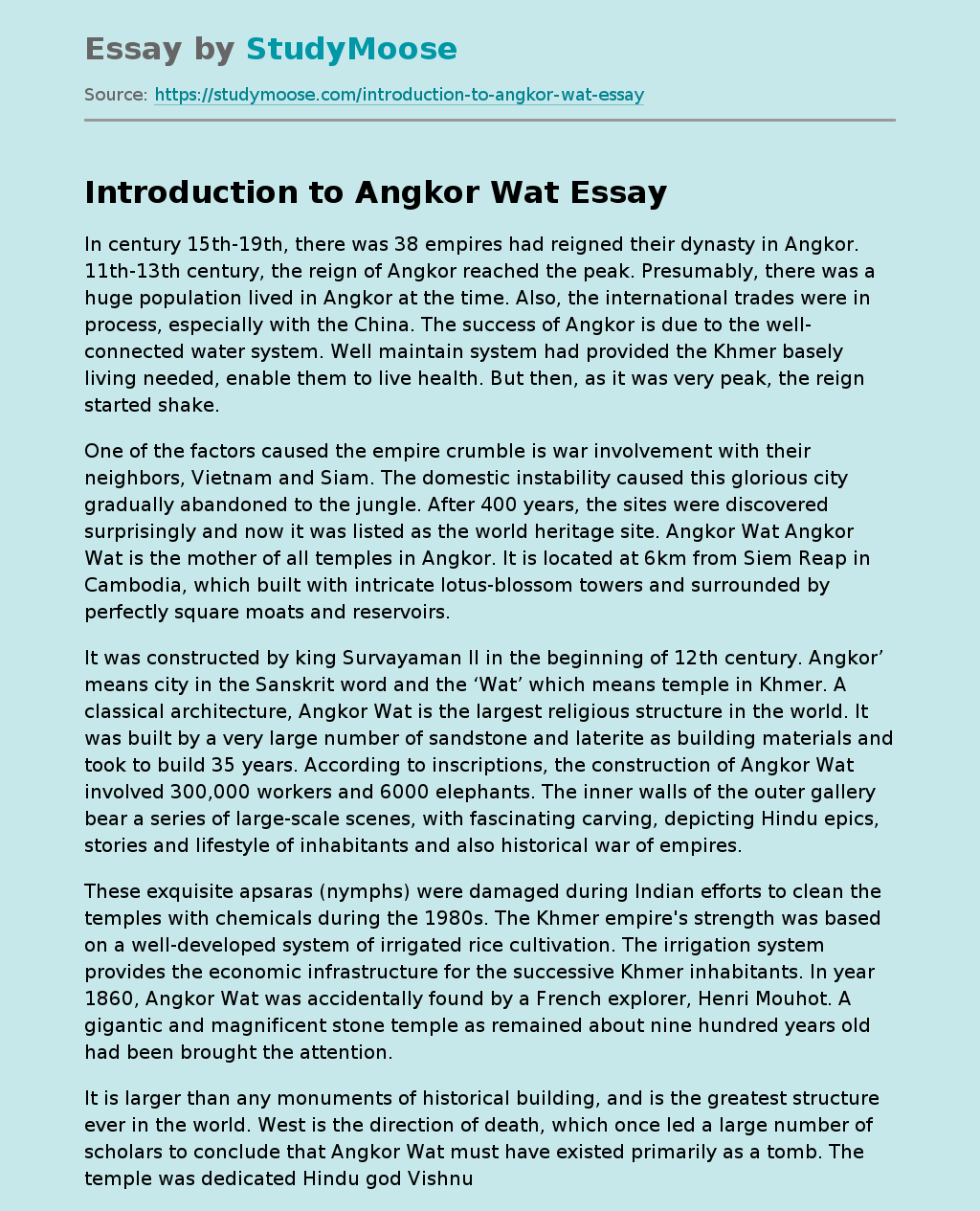