Introduction and History of Uber

The United States of America in my opinion, is truly is the land of opportunity where individuals make their dreams a reality. For Travis Kalanick and Garrett Camp the founders of the ever popular Uber or its legal name Uber Technologies Inc. Better known as the ridesharing service that started as an overseas conversation became their and many American dream. The story goes one winter night in Paris the duo was unable to hail a taxi during the 2008 annual tech conference, LeWeb, and discussed the idea of “a timeshare limo service that could be ordered via an app”.

Don't use plagiarized sources. Get your custom essay on
“ Introduction and History of Uber ”
Get custom paper
NEW! smart matching with writer

(Blystone, 2018) Enthused with the idea Camp returned home and purchased the domain UberCab.com. (Blystone, 2018) Although UberCab was Camp’s side project and it took some convincing for Kalanick to join by early 2010 the ride order service was in motion. Originally concept tested in New York, the service was officially launched in May 2010 in San Francisco, CA as an “app-hailing black car limo service”.

Seeing that Uber was “the new kid on the block” one could assume that the initial customer response was overwhelmingly positive from simply combining technology and convenience. Who doesn’t like the idea of a black car service who pretty much is your chauffer for a fee? Yet five months after UberCab’s official launch the company received a cease and desist order from the Municipal Transportation Agency in San Francisco. The agency cited one of the issues with the company was the use of “cab” in the company’s name.

(Blystone, 2018) So what did the startup do? They immediately decided to change their name to Uber by purchasing the domain Uber.com from Universal Music Group. (Blystone, 2018)

Uber known as the fastest growing ride sharing company has faced many controversies since the beginning. In regards to their political affairs once upon a time the company lacked clear regulations in regards to insurance amongst drivers and the company determining who was at fault if there was an accident Uber driver or the company itself was not a black and white answer.(Blystone, 2018) Additionally, due to the lack of legislation within the company’s token loophole Uber drivers did not have to have a taxi license. Furthermore questions of whether or not drivers for the company were contractors or employees and if the company had to comply with minimum wage requirements accordingly. Despite the negativity Uber faced, local governments seemed to favor Uber and its risky disruptive behavior but the same could not be said globally. (Dudovskiy, 2018)

In London taxi drivers staged a hefty protest against Uber. The protest came as a result of the taxi companies claiming that since Uber avoids their expensive license fees and bypasses local laws it creates unfair competition. (Blystone, 2018) Eventually Uber lost its license to operate in London where the company had 40,000 registered drivers in October 2017. The Transport of London stated Uber was unfit to hold a license. Yet on June 26, 2018, a London judge overturned the ban, effectively allowing Uber to operate under a 15-month license along with conditions. (Blystone, 2018)

Furthermore, Uber has faced endless scrutiny and has been banned in several countries such as Bulgaria and Germany. (Dudovskiy, 2018) The Netherlands ruled against Uber for their driver’s deficient of a Taxi License. (Frue, 2017) However strategically, the company appoints local figureheads to build grassroots support. For example, when Uber was struggling with regulators in Calgary, it recruited the philanthropist and Dragon’s Den star W Brett Wilson as its first driver in a “pop-up” service which offered users free rides if they made a $5 donation to a community charity. (Solon, 2017)

Economically an argument whether or not Uber brought new career opportunities or stole from existing taxi drivers is up for debate. Uber makes its way into a market and pretty much does whatever they want. The company has found ways to work around legislation and other government requirements. Conversely, Uber’s economic impact in the United States has been significant. In the United States alone, “the take-home amount in gross revenue for Uber’s entire fleet of driver and delivery partners in 2017 was more than $12.9 billion.” (Uber, 2018)

As far as the contracted drivers majority in the US disclose they use the salary from Uber to complement other sources of income. At the same time, the availability of this kind of opportunity is a game changer for some people giving them the liberty to work their own schedule and determine how much they chose to bring home on a weekly basis . It is reported that nearly a quarter (23%) of drivers nationwide were unemployed prior to driving with Uber. (Uber, 2018)

So what contributed to Uber and their Social imprint? Simply stated; easy availability and word of mouth. Ubers customers can enjoy the ease and convenience of accessing the company’s app from their smartphone. Rates, availability, including wait time and ride options are all accessible and available at the consumer’s convenience while monitoring their driver’s location and progress.

That is not the case for the alternative, taxis, in order for patrons to utilize their service one needs to hail a car, assuming they are lucky enough to do so. Depending on the taxi’s availability at the time of request, especially in densely populated cities like New York. If the patron is unable to hail a taxi they are left with no choice but to call a dispatching center and wait for their potential driver.

Another option is public transportation such as a bus or train seeing as they run on a schedule, this may be more appealing to some but the patron still had to take into consideration outside influences such as weather, traffic, their safety and even potential suicide attempts (trains) when planning to use and arrive at their destination within a designated time. These options can be stressful for most since Uber provides a level of transparency unlike that of the taxi and public transportation industries.

Uber services can only be requested through the companies app. The app was created for consumers to have the opportunity to select their destination; view their estimated cost for the trip prior to their final selection. Uber relies heavily on their app if the app is down the business is unable to function. Additionally Uber patrons are able to rate their drivers which can negatively affect drivers if their rating falls below a specified threshold. (Various, 2015)

Although Uber contracts their drives that use their own vehicles as opposed to the company owning a designated fleet what does that do for the company in regards to sustainability?

Seeing that “vehicle emissions from average passenger vehicle emit 4.7 metric tons of CO2 per year, according to the Environmental Protection Agency in three years, Uber should have contributed 94,000 metric tons of CO2 into the atmosphere in New York City alone, which equates to nearly 101 million pounds of coal burned. (Emerson, 2016)

Although Uber claims to be a ride share company offering services like Uber pool one can argue their environmental impact by allowing multiple passengers to ride together to the same location it is less traffic on the road. “In 2014, MIT researchers conducted a computational study of 172 million New York City taxi trips completed in 2011.” (Emerson, 2016) “By modeling different share ability networks throughout the city, the authors were able to see that certain carpooling algorithms were able to cut trip lengths by 40 percent or more, reducing driver costs, emissions, and rider fares.” (Emerson, 2016) Drivers turned Uber passengers will spend less time on the road or looking for parking in heavily congested cities and events (Emerson, 2016) which in turn will also alleviate stress and aggressive drivers.

According to Bloomberg “Uber Technologies, Inc. develops, markets, and operates a ridesharing mobile application which allows consumers to submit a trip request, which is routed to crowd-sourced partner drivers. Its smartphone application connects drivers with people who need a ride. The company’s application enables users to arrange and schedule transportation and/or logistics services with third party providers.” (L.P, 2018) The company is an example how creativity can influence consumers and create brand awareness. Uber is known to enter the market one city at a time, Uber uses market research to determine the probability of success and establish the degree of need for their ground transportation services. (Devault, 2018) Seeing that Uber grew rapidly, it proves there is economic potential although competition exists such as Lyft.

Ubers customers are everyday people, commuters and tourists alike. Depending on the location people will use the Uber service relatively as they see fit. For example some people use it to get to the airport as opposed to paying the expensive rates at the airport parking garages. Or tourist and business people alike may use it to get around cities which they are not too familiar with and feel more comfortable and safe using an Uber as opposed to other forms of public transportation.

“The company provides e-commerce services for car hire. The Company offers a website and develops application that allows users to request a car for hire from any mobile device text message”. (L.P, 2018) In order to recruit drivers the company offers sign up, partnerships with Hertz rental agency and other methods of luring drivers to contract with them. Without drivers Uber essentially does not exist.

Uber’s pricing is basically determined according to supply and demand. (Bhasin, 2018) Depending on the time of day or events in an area Uber is known for their astronomical surge pricing. Uber’s services customers globally as stated by Bloomberg “It serves customers in North, Central, and South Americas, as well as Europe, the Middle East, Africa, and the Asia Pacific”. (L.P, 2018)

Introduction and History of Uber. (2021, Apr 14). Retrieved from https://studymoose.com/introduction-and-history-of-uber-essay 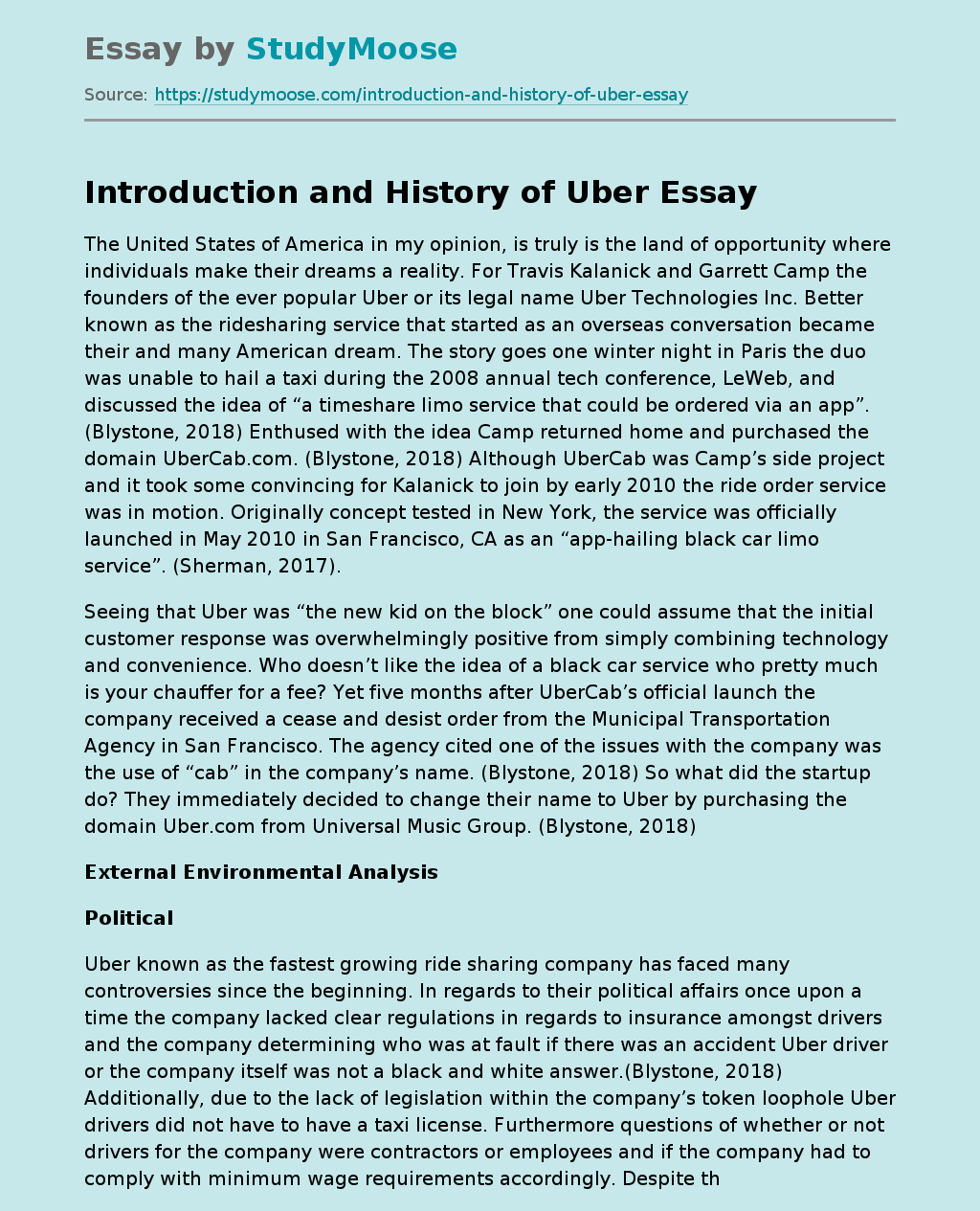