Into Thin Air by Jon Krakauer

I think Krakauer is tackling a bigger conflict than the one between himself and the lack of trust within his team. Krakauer repeatedly suggests a theme of man vs nature throughout his novel. He also ends the conflict between him and his team when he sees they are much like himself in their drive which fuels their desire to climb Everest.

Krakauer foreshadows the peril to come when he says, “Moments after I dropped below the south summit it had begun to snow lightly” (Krakauer 11).

Don't use plagiarized sources. Get your custom essay on
“ Into Thin Air by Jon Krakauer ”
Get custom paper
NEW! smart matching with writer

By using the term “lightly” he hints to the fact that hazardous conditions are about to ensue. This also begins his menacing tone towards the summit of Everest.

Krakauer gives off the menacing tone to deny his audience the feeling of safety. This keeps the reader engaged and on their toes, wanting to continue the book. He often does this through personification of the mountain: “Whether one or both of them reached the summit before being swallowed by the mountain and into legend has been fiercely debated ever since” (18).

Proficient in: Into Thin Air

While the mountain cannot literally swallow people, using this comparison to show how people disappear without a trace creates a feeling of danger within the reader. Having this emotion towards Everest allows the audience to feel sympathy for Krakauer and the others who have climbed the mountain. Personally, I liked how Krakauer always ended the mountain scenes during an exciting part because it made me want to keep reading so I could find out what was going to happen next.

This really kept me engaged and is the main reason I enjoyed the book as much as I did.

Krakauer constantly talks about his drive to climb the most extreme terrain possible, however, he lacks reasoning as to why he participates in the first place. He says, “I dreamed of ascending Everest myself one day; for more than a decade it remained a burning ambition” (23). This could allude to his quest up Everest being a spiritual voyage in which obstacles are brought on by abstract powers resembling faith and optimism. Like a pilgrimage, the destination appears to be the goal. However, the journey is typically where the lesson is learned. Krakauer is consistent with this when he says, “I’d been fantasizing about this moment…for many months. But now that I was finally here, standing on the summit of Mount Everest, I just couldn’t summon the energy to care” (7). Even though Krakauer had reached the destination, it was the journey there and back where he really learned and tested his faith in himself and his drive to climb.

Oxygen is extremely important for survival and is not commonly given much consideration. On Everest, oxygen becomes a climbers most essential tool when they reach the thin air towards the summit. Throughout the novel this represents the persistence of the climbers. When Krakauer is near Hillary Step he asks Harris to turn off his oxygen to conserve what is left but in his state of confusion he does the exact opposite. He says, “I’d just squandered the last of my gas going nowhere” (10). Eventually he makes it down the mountain to camp which symbolizes his survival along with all the others who received the necessary oxygen in time.

The summit represents a false sense of security and completion. To the team, it appears they have survived when they have reached the summit, but the journey there is only half the battle because they still have to descend. The unrealistic feeling of security is what helps portray the menacing tone towards the summit throughout the book.

This is a symbol of relief to the climbers. Upon Krakauer’s return to base camp, he assumes he is safe along with the rest of his team (who he believes will eventually arrive). He then allows himself to fall asleep because he has made it back safely and can finally rest. This occurs again when others think in their deadliest moments that they just have to make it back to base camp and all will be ok.

Into Thin Air by Jon Krakauer. (2021, Dec 03). Retrieved from http://studymoose.com/into-thin-air-by-jon-krakauer-essay 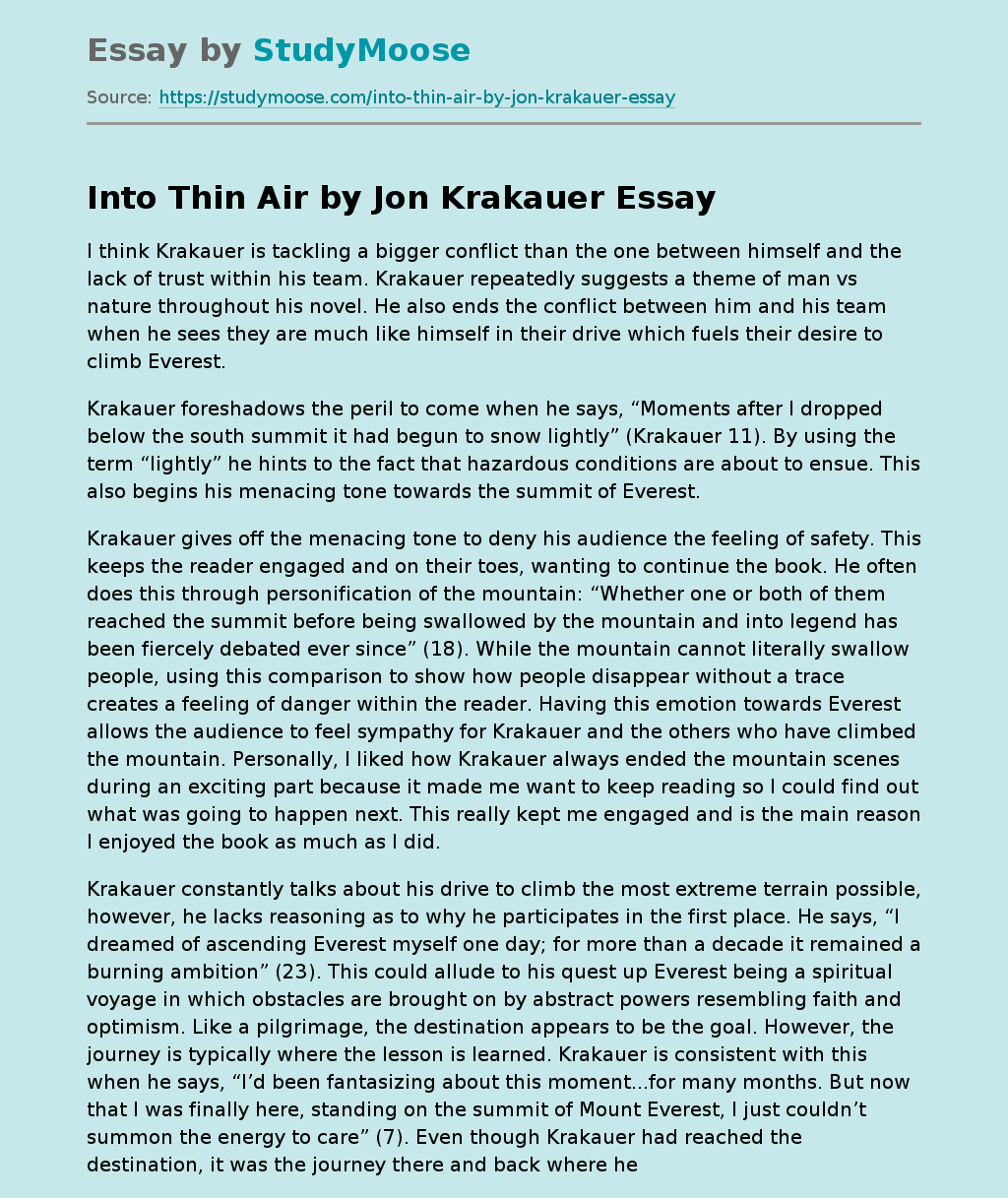