Have you ever considered giving your life savings of $24,000 to charity and disappearing into the wild with barely any supplies? What about burning, literally burning, all the cash you had? Chris McCandless did things most people wouldn’t even think of doing. Money simply had no value to him. Chris admits this when he says “I don’t want your money and I already have a watch” to Gallien who was giving him a ride to the forest, where his goal was to live off the land.

Don't use plagiarized sources. Get your custom essay on
“ Into The Wild ”
Get custom paper
NEW! smart matching with writer

Chris does in fact understand that others value money. Why else would he give money to charity? McCandless knew that they needed it and would be very grateful. He also offered Gallien to pay for the drive to the forest when he says “How much do I owe you?” Chris McCandless didn’t like receiving help, but when he did, it was only from a select group of people. He didn’t accept help from his parents when we they tried to buy him a new car or pay for his law school because, “they will think they have bought [his] respect.

But he accepted help from Wayne when he writes him a postcard thanking Wayne for his generosity and thanking Kevin for the clothes that stopped him from freezing to death. Chris’s views on money and help are that he simply sees no value in them. Chris also believed that, “All true meaning resides in the personal relationships to a phenomenon.” He expresses this opinion when he says “No phone, no pool.

No pets, no cigarettes. Ultimate Freedom.” But how does having no phone, pool, pets, or cigarettes have anything to do with one’s freedom? I think the point Chris was trying to make was the fact that there is nothing to hold you back. It’s not about the object, it’s about what you do with it, or what it does to you. When you have no phone, you don’t have the constant need to be on the phone that comes along with the item.

If you have a pet, you don’t have the constant needs of the other living being to uphold and satisfy. If you don’t have cigarettes, you don’t have the nicotine addiction to satisfy. That’s what Chris means by ultimate freedom, freedom from the addictions that the mainstream objects provide. Chris McCandless also had a problem with mainstream America and going along with the trends. I think it’s safe to say that he wasn’t mainstream both because he burnt all his money and he walked around refusing to wear socks. That’s not something we see people doing every day; his co-worker George at McDonalds said “He always wore shoes without socks- just plain couldn’t stand to wear socks.” Chris also liked to express his love with nature. His other co-worker Lori said “I don’t think he ever hung out with any of the employees after work or anything.

When he talked, he was always going on about trees and nature and weird stuff like that. We all thought he was missing a few screws.” Chris didn’t live the life a ‘normal’ person would’ve. But then again, what is normal? Maybe we’re the crazy ones. Chris McCandless also had a problem with authority. He hated his parents and the government very much. Chris wanted his parents out of his life, he shows this by saying “I’m going to divorce them as my parents once and for all and never speak to either of those idiots again as long as I live.” I think Chris didn’t like having a figure of authority in his life because he loved the idea of freedom. Chris traveled all over the world with that freedom.

In my own life, I have realized how easily I take things for granted. Not things like money or food or all the wonderful things my parents provide me; but I take the beauty of nature for granted, I take for granted how easily things are given to me and I don’t really know the feeling of really having to work towards something I want. I also don’t have the ability to say I have a burning passion for something and have spent my life resenting it like Chris did with the government or his family; but I can’t really say I’m upset about that either. But I think everyone in our society should live a little like Chris, live off the land, go backpacking to Alaska, and have nothing so you can see the true value in everything we do have. Then we’ll be just as wise as Chris and feel as free as he did, and maybe someday our life will be interesting enough to be written about too. 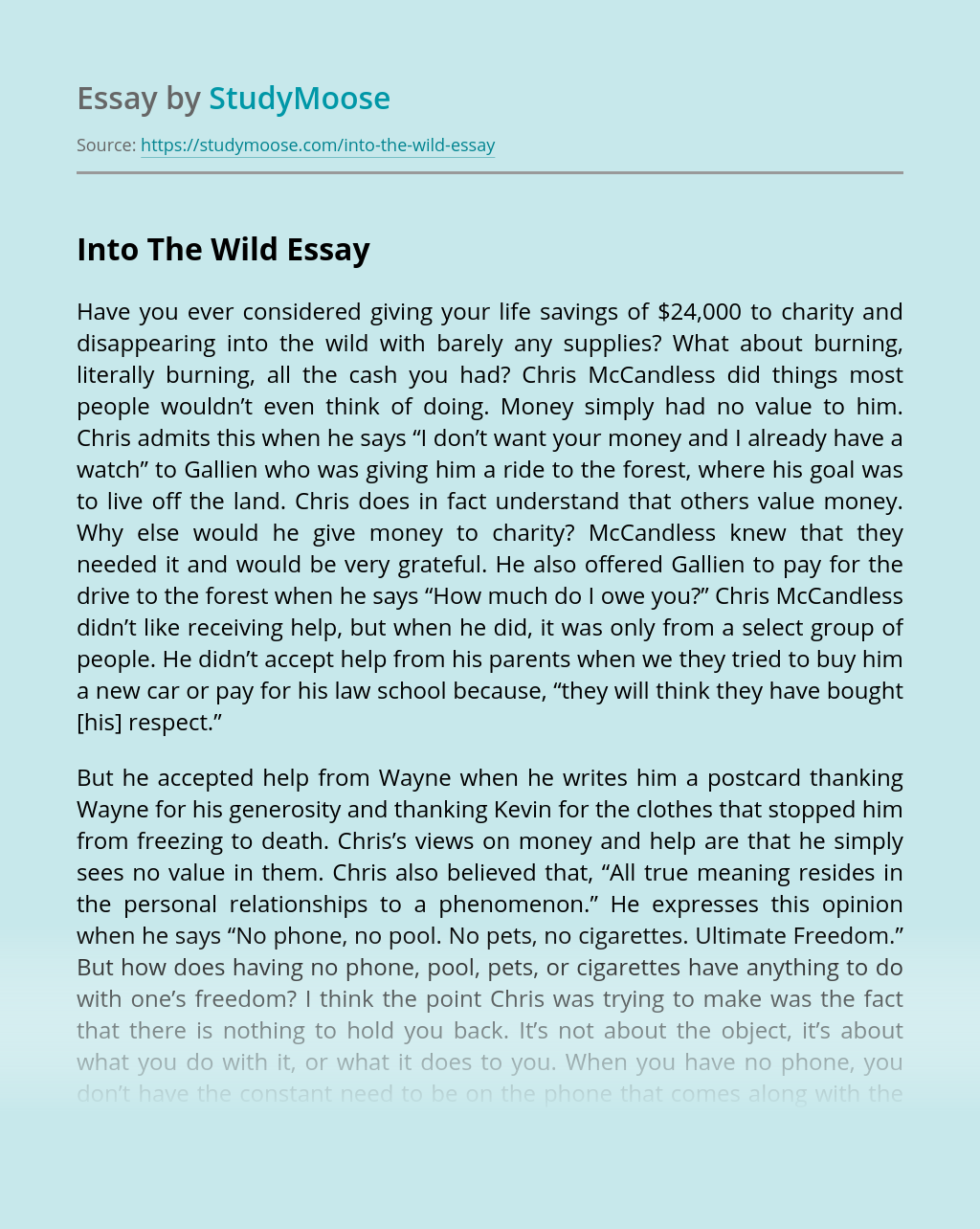