Don't use plagiarized sources.
Get Your Custom Essay on Internal & External Conflict Just from $13,9/Page

Pushing away your thoughts would make the situation more intense. Think about ways you can manage it instead of pushing the thoughts away. It can help if you write the conflict down or don’t let your mind fight itself. Dealing with external conflict is sometimes more simple. Effective listening is a way to deal with external conflict. It’s important to listen and understand the other person’s point of view. Effective listening doesn’t always work out which is why communication is key.

It’s important to clearly communicate your own feelings without putting the other person on the defensive.

The conflicts I have dealt with in my life are mostly internal. I try my best to keep my problems within myself so that the conflict I’m dealing with doesn’t become another person’s problem. I wouldn’t want an internal conflict to become an external conflict, so I manage my problems myself. Growing up, I’ve always found it difficult to choose between one choice and the other. My most common line I’ve used is “It doesn’t matter”. I have always been scared of choosing one thing and having it become the wrong choice. Even up to now, I still use that line. I know it’s going to become a problem. Real soon, I would have to stop using that line and start making choices myself. The choices I have to choose from could be as little as which flavor of ice cream I want to as big as choosing when I want to start driving classes. I have to stop having other people choose for me and start choosing for myself because one day, it’s going to become an even bigger problem.

Other than that, if something personal were really hitting me hard, I would draw or read just to get through the problem. I would most likely read to escape reality because being in the book’s world is a place I would rather be in at that moment. I rarely deal with external conflict. When I do, I take it really hard because I haven’t dealt with much external conflict in my life. I try my best to be a good person and prevent myself into getting into situations with another person. If I were ever dealing with external conflict, it would most likely be a disagreement with another person. I’m that person who stands their ground. If I had an opinion or a chance to prove someone wrong, I would. It’s not about being right; it’s about preventing another person into believing something else when it’s wrong. Yes, everyone is entitled to his or her own opinion, but sometimes that opinion of something is not right.

I have a lot of patience, so I wouldn’t snap at someone right when there’s a disagreement. If someone were really getting on my nerves, I would stand my ground. I would say what I have to say then stop and walk away because sometimes, it’s just not worth it. One external conflict I always have to deal with is plain and simple, my brother. I have three older brothers, but one specific brother of mine is a complete nuisance. We fight on a daily basis and sometimes standing my ground isn’t even worth it. One night, we had a disagreement on school. My brother believes that school is a waste of time and being book smart is not as beneficial as having common sense. He says that being book smart isn’t going to get you anywhere in life and that common sense will make you more successful. I disagree with him completely because nowadays, you need an education to have a successful life.

I just want to prove to him that I’m not going to be a failure and striving to do my best is going to pay off. Everyone is going to have to encounter a conflict in his or her life. Nobody’s perfect and everyone’s different so there’s always going to be problems. Conflict isn’t a bad thing. The only kind of bad conflict is unresolved conflict. Getting through a conflict will make you stronger and you’ll be able to conquer life more successfully. Internal conflict is harder to deal with in my own opinion because with internal conflict, no one can help you but yourself. You can get help to deal with an internal conflict, but at the end of the day, it’s up to yourself to get through the problem. 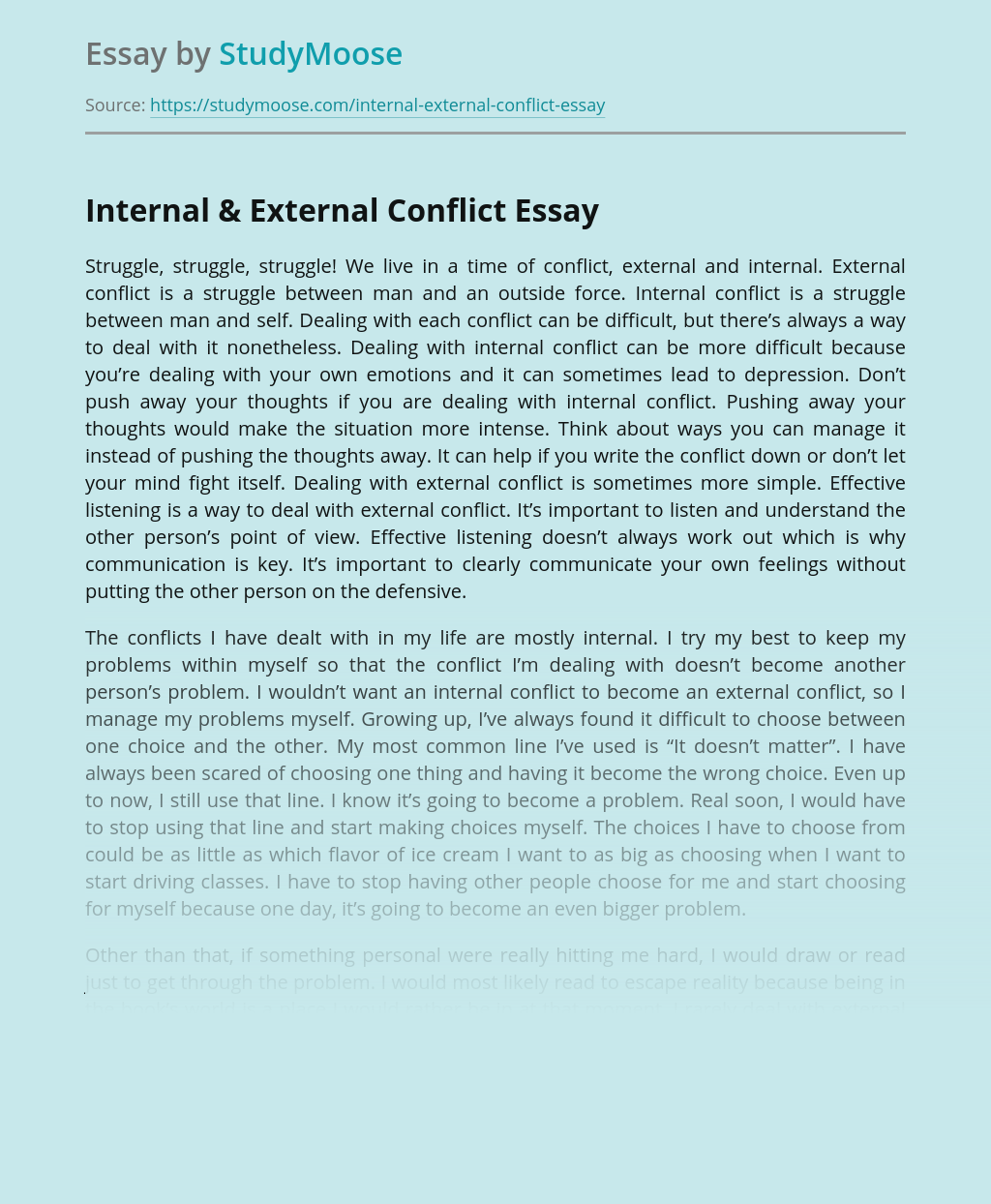 Copy and ecause those in control of a disproportionate share of society’s resources actively defend their advantages. The masses are not bound to society by their shared values, but by coercion at the hands of those in power. This perspective emphasizes social control, not consensus and conformity. Groups and individuals advance their own interests, struggling... VIEW ESSAY

Gasland can be examined using the social conflict theory of socialism. There are three main theories of socialism: structural functional, social conflict, and symbolic interaction. The reason for social conflict being the best candidate for Gasland is because it shows how much power, wealth, and prestige the government can hold among the U.S. population. Josh... VIEW ESSAY

View sample
Get Essay
"The Glass Roses" by Alden Nowlan

There are various conflicts in the story, “The Glass Roses”, though the main and most significant one being of an internal conflict within the protagonist, Stephen, a “willowy fifteen-year-old” working in the pulp woods. The internal conflict occurs between his desires to fulfill his childhood dreams and those to become a “man”. Stephen is heavily... VIEW ESSAY

View sample
Is Conflict Inevitable in the Employment Relationship?

The relationship between companies and staff members has actually long been the subject of prevalent research study and dispute within the organisation world. This work relationship can be defined as a complex system in which social, financial and political elements combine with a staff member who exchanges mental and manual labour for rewards assigned by... VIEW ESSAY

Analysis: The short story, “Two Kinds,”� displays the relationship between a Chinese mother and a disobedient Americanized daughter. Jing-mei, a second-generation Chinese daughter, deals with her own internal conflict as well as an external conflict with her mother. The internal effort to find her true self is a lesson Jing-mei will have to discover, as... VIEW ESSAY